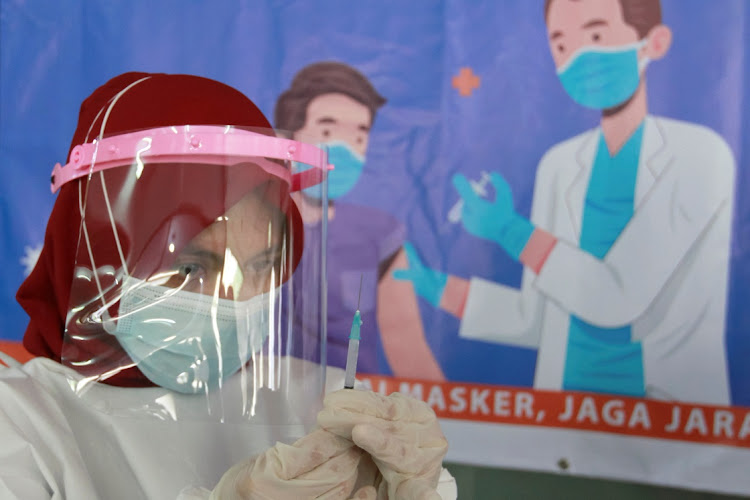 Jakarta  —  Indonesia's capital Jakarta is threatening residents with fines of up to 5-million rupiah ($357) for refusing Covid-19 vaccines, a stiff penalty aimed at ensuring compliance with a new regulation making inoculations mandatory.

Deputy Jakarta governor Ahmad Riza Patria said city authorities were merely following rules and such sanctions were a last resort in Jakarta, which accounts for about a quarter of the archipelago nation's more than 1.2-million coronavirus infections.

“If you reject it, there are two things, social aid will not be given, (and a) fine,” Riza told reporters.

Indonesia is fighting one of Asia's biggest and most stubborn coronavirus pandemics and aims to inoculate 181.5-million of its 270-million population within 15 months under a vaccination programme that started in January.

Nearly 34,000 Indonesians are known to have died from the virus.

Indonesia announced a presidential order earlier this month stipulating anyone who refuses vaccines could be denied social assistance or government services or made to pay a fine.

The penalty would be determined by regional health agencies or by local governments.

The new regulation follows months of public scepticism and lingering doubts about whether coronavirus vaccines are safe, effective and halal, or permissible by Islam.

Public health experts say public jitters about the vaccine could be a stumbling bloc, while health agencies in West Java, Indonesia's most populous province, and West Nusa Tenggara have told Reuters they had no plans to enforce sanctions.

A December survey by pollster Saiful Mujani Research and Consulting showed only 37% of 1,202 respondents were willing to be vaccinated, 40% were undecided and 17% would refuse.

Usman Hamid, a director at Amnesty International Indonesia, said enforcing vaccinations were not the answer.

“A blanket mandate on vaccination, especially one that includes criminal penalties, is a clear violation of human rights,” Hamid said.

At the latest, global vaccination rate it would take an estimated 4.9-years to cover 75% of the population
World
11 months ago

Italy has been devastated by the pandemic, both in loss of life and economically and is in its worst recession since World War 2
World
11 months ago

Africa’s official Covid-19 deaths near 100,000 — but the number could be much higher

Reuters data show Africa's case fatality rate is now at about 2.6%, higher than the global average of 2.3%
World
11 months ago

With scientists not exactly sure why, India’s infections and deaths have dropped nearly 90%
World
11 months ago