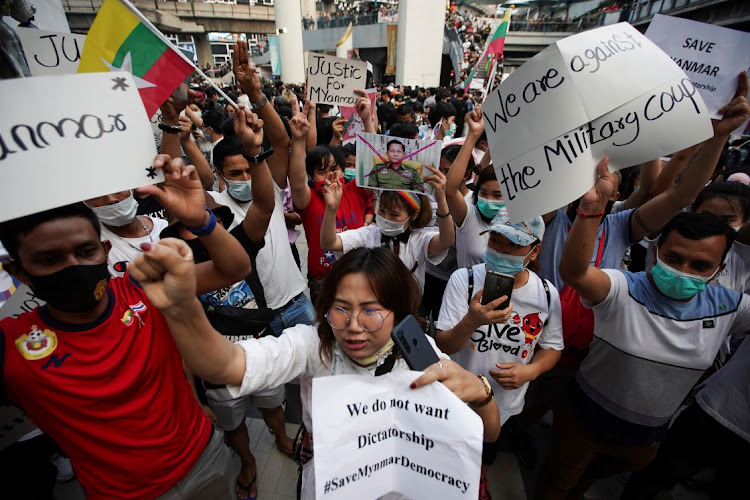 Myanmar citizens hold placards as they take part in a protest against the military coup in Myanmar. Picture:REUTERS/ATHIT PERAWONGMETHA

Myanmar’s military coup and declaration of a state of emergency has sparked concern in neighbouring China over metal and mineral supplies amid already high tin, copper and rare earth prices.

Below is a description of trade flows from Myanmar to China, the world’s top metals consumer, with comment from analysts and associations on the prospects of disruption.

Myanmar is the world’s third-biggest miner of tin, according to the International Tin Association (ITA), and in 2020 accounted for more than 95% of China's imports of tin concentrate, used by smelters to make refined tin for circuit-board soldering.

Shipments from Myanmar, which borders China’s tin-smelting heartland of Yunnan, fell 13.5% in 2020 amid coronavirus-related disruption.

But since Myanmar's main tin-mining area is the autonomous ethnic Wa region near China, which acts separately from the central government, it has not been affected by the coup and shipments are still possible, says the ITA, which sees concentrate exports holding steady in February.

Mines in southern Myanmar are likely to reduce production and may eventually have to suspend operations as Chinese mining supplies, which enter at the Ruili border crossing in the north, have been cut off, the ITA says. But these mines only make up about 20% of output, it said.

China is the world’s dominant producer of rare earths, a group of 17 minerals used in consumer electronics and military equipment. But it relied on Myanmar for about half its heavy rare earth concentrates in 2020, says Adamas Intelligence MD Ryan Castilloux.

Myanmar is therefore an “exceptionally critical supplier of ... feedstocks that are essential ingredients in high-strength permanent magnets for electric vehicle traction motors, wind power generators, industrial robots and a wide array of defence-related applications”, he said.

There has been no sign of disruption for now, since Myanmar's rare earth mines are under the control of autonomous militia groups, but the test will come after the Lunar New Year holiday, which begins at the end of this week.

“When China’s industry powers back on in March, steady and abundant supplies from Myanmar will be more critical than ever,” Castilloux said.

Myanmar was the world’s 18th-biggest copper producer in 2019, according to the International Copper Study Group, with all output coming from two projects led by China's Wanbao Mining, a unit of military supplier Norinco.

Refined copper cathode shipments to China were 108,584 tonnes in 2020, barely making a dent in record imports of 4.5-million tonnes from all countries, meaning any disruption would not be material.

Copper from both the Letpadaung and Sabetaung and Kyisintaung mines in Monywa, north-central Myanmar, is deliverable on the London Metal Exchange and therefore a source of supply for other international markets.

About 300 Monywa copper miners stopped work on February 5 to protest against the coup, the Irrawaddy news website reported.

A Chinese source familiar with the matter said the number was lower and there had been no effect on production.

Wanbao did not immediately answer a request for comment.