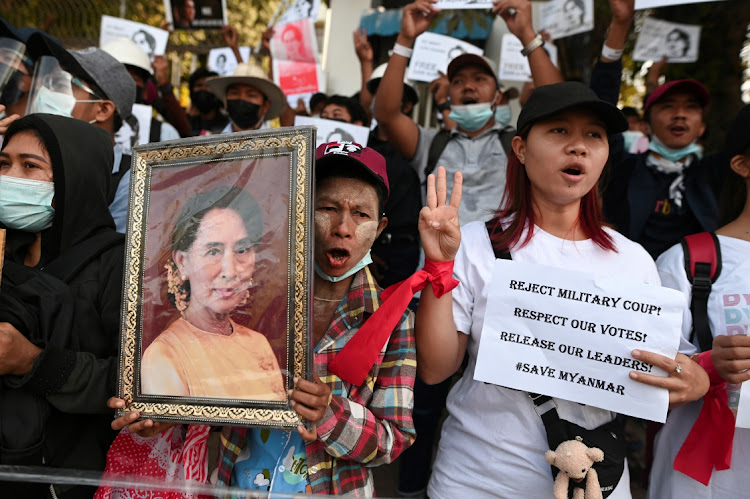 Bangkok  —  Late on January 28, Myanmar leader Aung San Suu Kyi destroyed her phone to prevent it falling into the hands of the military, according to two people close to her. Some of her friends and colleagues started to pack their bags, either preparing to flee or in expectation of being arrested.

Talks had been held that day in the capital Naypyitaw between representatives of Suu Kyi and army leader Senior Gen Min Aung Hlaing over the legitimacy of Suu Kyi’s party’s sweeping victory in November’s general election. The meeting had ended badly, with no agreement.

Reuters spoke to nine people, including government advisers and others who worked closely with Suu Kyi, to reconstruct the events that led to her arrest and the toppling of her civilian government by the military on February 1. The people spoke on condition of anonymity; the army has been jailing opponents of the coup. Most of the details have not previously been reported.

The coup ended a brief, decade-long experiment in democracy in the Southeast Asian nation of 53-million, shattering hopes that it would emerge from more than half a century of military rule that kept the country isolated and impoverished. It is the latest example of democracy in retreat in Asia, as Thailand’s military-backed monarchy resists calls for change and China is stamping out dissent in Hong Kong.

Nobel laureate Suu Kyi, whose five years in power ended half a century of rule directly by the military or by governments backed by it, stood firm against the army’s demand, the people said.

During the talks, Min Aung Hlaing’s representatives rebuked the civilian government side, saying “you people are going too far, rude and insolent”, according to a person briefed on the matter. From the head of the army, it was a jarring admonishment in a formal setting.

Another two people briefed on the talks said that the army's representatives said the military was insulted.

After the meeting, Kyaw Tint Swe, Suu Kyi’s right-hand man and one of her representatives in the talks, appeared shaken, according to three people with knowledge of the matter. Kyaw Tint Swe could not be contacted for comment.

“The civilian government couldn’t do anything,” said one of the people with knowledge of the failed talks. “They have no armed forces, they have no power.”

As talks were breaking down, armoured vehicles were already moving around Yangon, the commercial capital, and other cities across Myanmar. Hundreds of army supporters rallied outside the country’s holiest Buddhist site, Shwedagon Pagoda in downtown Yangon, threatening reporters who tried to interview them.

On January 30, the army quieted concerns it was on the verge of carrying out a coup by saying it would protect the constitution and act according to the law. The 2008 constitution, drafted by the military, enshrines democratic elections but allows the army to take power in a state of emergency.

It was a hollow promise. At 3am the following Monday, February 1, the army began sweeping up government ministers, legislators, writers, filmmakers and activists. Later that morning, it announced a return to military rule.

Suu Kyi, one of the world’s most famous political prisoners during more than 15 years of house arrest, was once again imprisoned in her home. She was later charged with the obscure crime of illegally importing walkie-talkies.

Suu Kyi’s political party, the National League for Democracy (NLD), has said the charges the army pressed against her are politically motivated and has called for her release. On February 1, the NLD issued a statement on behalf of Suu Kyi, protesting against the coup.

“The actions of the military are actions to put the country back under a dictatorship,” said the statement, which carried Suu Kyi’s name but not her signature.

The following day, state media said Min Aung Hlaing told the first meeting of his new government that the army had to take power after its protests over alleged election fraud were ignored. Independent international poll watchers have said there were no major irregularities in the election.

A succession of military and military-backed governments ruled Myanmar from 1962 to 2015, when Suu Kyi’s NLD won the first free and fair elections. Nevertheless, the army-drafted constitution assigns significant powers to the military, including control over the security forces and key ministries.

The build-up to February's military coup started on November 8, when Suu Kyi’s NLD won more than 80% of contested seats in the general election, trouncing the army-backed Union Solidarity and Development Party.

Before, during and after the election, the military cast doubts over the vote and made unsubstantiated allegations of election fraud. In mid-January, Min Aung Hlaing called on the election commission to consider its complaint that as many as a third of the 30-million or so votes cast were potentially fraudulent.

The election commission said it is investigating some errors in voter lists but the outcome would not be enough to change the result of the election. It has not publicly released the final list of eligible voters as the military has demanded. The military has said it wants to check the list to verify voters’ eligibility. Representatives of the election commission could not be reached for comment.

Fears of a possible coup spiked on January 26, when military spokesperson Zaw Min Tun refused to rule it out. The following day, army chief Min Aung Hlaing said the constitution should be revoked if it was not observed.

Suu Kyi, 75, and Min Aung Hlaing, a 64-year-old career army officer who was set to take compulsory retirement in July, had a testy relationship and had not spoken directly for months, according to one person close to Suu Kyi.

Instead, representatives of each sat down in Naypyitaw for hurriedly arranged talks, six people said. There were also talks in Yangon, the former capital and Myanmar’s largest city, one of those people said.

In Naypyitaw, Suu Kyi was represented by Kyaw Tint Swe, her right-hand man and formerly a stout defender of the military, according to six people with knowledge of the talks. In Yangon, Suu Kyi’s representative was her long-time friend and personal doctor Tin Myo Win, according to one of the people. Tin Myo Win could not be reached for comment.

Senior army negotiator Lt Gen Yar Pyae was one of the two military representatives in the Naypyitaw talks, two of the people said. Reuters could not determine the other. Yar Pyae could not be reached for comment.

The talks, and other exchanges between the two sides, extended over at least four days, to January 31, the people familiar with the talks said.

The army representatives made at least three demands, according to three of the six people familiar with the talks: reschedule the February 1 opening of parliament, disband the election commission, and re-examine the vote under military supervision. The army set a deadline of 5pm on January 29.

Reuters was not able to establish what, if any, terms were offered by Suu Kyi’s representatives to the military. An announcement in state media later on January 29 said the opening of one of the two houses of parliament —  scheduled for February 1 — would be delayed by one day.

But even before the January 29 afternoon deadline, it became clear that the talks were effectively over. The two sides’ representatives “could not establish good personal rapport”, said one of the people familiar with the talks. “We had a long period of misperception, mistrust, before everything started,” the person said, referring to the dispute over the election. The military and the NLD have been at loggerheads since the party was founded in the late 1980s.

Suu Kyi “seemed resolute” not to bend to the military, one person close to her said.

Another person close to Suu Kyi said the military was trying to create a narrative that there was civil unrest and popular support for the military, “hence justify a takeover, in some twisted logic”.

Win Htein, one of Suu Kyi’s close aides and a senior member of the NLD, said by phone on January 29 that his bags were packed and he was waiting to be arrested because he feared a coup was imminent.

By January 30, some of the tension eased after the army released its conciliatory statement vowing to protect the 2008 constitution. It accused the media of misinterpreting the comments made earlier in the week by Min Aung Hlaing.

Suu Kyi is barred from the presidency by a clause the army put in the constitution stipulating that people with foreign relatives cannot serve. She has two British sons with her late British husband. As a result, she governed as state counsellor, a position crafted for her that was equivalent to head of state. After her party won the election, she was due to appoint a president, as she did when her party won the last election in 2015.

Some people close to the government expected Suu Kyi to appoint Min Aung Hlaing or one of his allies as president, as a compromise to keep the army onside.

“I think people were, myself included, expecting to see a slightly depressing line-up of presidential candidates, thinking that might be the place that both sides could find some common ground,” another adviser to the civilian government said.

The January 29 deadline set by the military came and went without any agreement. On January 30, the military said it would honour the constitution, but the next day, fears of a military takeover were rising again.

Early on January 31 there were sightings of troops moving through Naypyitaw. One of the people familiar with the talks said that on that day one of the government’s representatives in the talks told them negotiations had collapsed and warned of a coup.

The warning was accurate. Starting about 3am, while most of Myanmar’s inhabitants slept, soldiers fanned out across the country to the homes of ministers, legislators, prominent activists and even Buddhist monks known for their opposition to the army. The targets were either arrested or forced to stay in their homes.

According to one person who worked with the former civilian government, soldiers turned up at telecommunications companies’ facilities to cut off access to the internet. By 3am, the companies had lost about half of their connectivity to the internet, according to independent cybersecurity monitoring group NetBlocks. None of Myanmar’s four telecoms companies responded to requests for comment.

The military could not be reached for comment on the internet outage.

The time and date of the move, that person and two others suggested, may have been chosen on purpose by Myanmar’s numerology-obsessed generals. The digits of 3am on February 1 — or 0300 on 2/1/21 — add up to nine. The number is traditionally considered auspicious in Myanmar.