The communist country, which is reshuffling its cabinet at a nine-day congress, knows the US is vital if Vietnam is to grow its economy 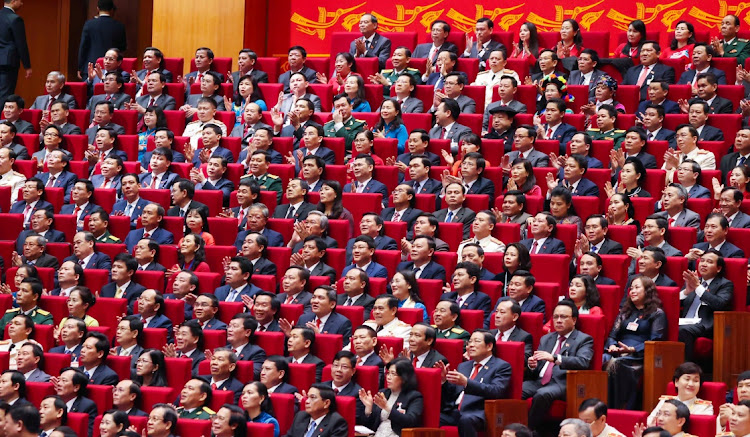 Delegates at the opening ceremony of the 13th national congress of the ruling communist party of Vietnam at the National Convention Center in Hanoi, Vietnam, January 26 2021. Picture: VNA/HANDOUT VIA REUTERS

Hanoi/Singapore — As officials in Vietnam’s Communist Party jockey for position during a twice-a-decade meeting to refresh the leadership ranks, they largely agree on one thing: closer ties with the US are set to become even more important to grow the economy and counter a rising China.

The new leaders, set to be announced on February 2, will be tasked with meeting a goal to turn Vietnam into an industrialised economy by 2030 with an annual economic growth of about 7% and a per-capita GDP of $7,500, about double what it is today. A good relationship with the US is key to both meeting this goal and keeping China’s increasing territorial assertiveness in check.

“The US is by far the largest export market for Vietnam” and “the only great power capable of acting as a counterweight to China”, said Alexander Vuving, a Southeast Asia expert at the Daniel K Inouye Asia-Pacific Center for Security Studies in Hawaii. “Vietnam, with its decades-long sovereignty disputes with China, badly needs the presence and involvement of a great power that can balance the rise of Chinese power.”

For leaders in Hanoi, President Joe Biden will be a welcome change in the White House after four years of engaging with the unpredictable Donald Trump. They spent the fall staving off threats of new American tariffs even while they benefited from the US-China trade war, as suppliers for global giants such as Apple moved some Chinese operations to Vietnam.

At the secretive nine-day National Party Congress that kicked off on Monday, some 1,600 delegates from across the country will formally sign off on leadership changes. They will elect a party chief and submit nominations to fill the top three government positions — prime minister, president and National Assembly chair. The sole candidate for each position will be voted on by the National Assembly in May or June.

“Our country has developed rapidly and sustainably,” Communist Party general secretary Nguyễn Phú Trọng, who observers believe could be in line for a third term, told delegates during Tuesday’s opening ceremony. “Growth quality has improved, macro-economic stability is affirmed, inflation has been kept under control and at a low level.”

Unlike in China, where President Xi Jinping has consolidated power since becoming Communist Party chief in 2012, Vietnam’s leaders tend to operate on a more collective basis. Top priorities for the next administration include gaining greater access to US consumers, possibly through a regional trade agreement, while avoiding punitive tariffs tied to allegations of currency manipulation.

“The country has signed trade agreements with all the world’s major trading partners and the only missing piece is the US,” said Vu Tu Thanh, senior Vietnam representative of the US-Asean Business Council.

While Vietnam depends on China for critical material and equipment in its factories, the country is also seeking closer ties with the US, Japan and India to become less dependent on its powerful neighbour.

During the Trump administration, Vietnam came under attack for its yawning trade surplus with the US, which in 2020 was expected to break the previous year’s record $56bn, and for Chinese trans-shipments — exports routed through the country to avoid US tariffs. Vietnam’s exports to the US jumped to $77.1bn in 2020, up 26% from a year earlier, according to Vietnam government statistics.

Under Biden, Hanoi can also expect greater criticisms from his administration and Congressional Democrats for jailing Vietnamese citizens who are critical of the one-party system. But the US also views Vietnam as key to its Asian strategy, said Huong Le Thu, senior analyst at the Australian Strategic Policy Institute.

“The recognition of Vietnam’s strategic importance will remain among the top decision-makers in the Biden cabinet,” she said.

The US and Vietnam resumed diplomatic relations in 1995, two decades after they fought a war. Relations have become warmer over the past 10 years as China grew more powerful and began asserting territorial claims off Vietnam’s coast, complicating its efforts to exploit energy resources.

In 2016, former president Ba­rack Obama lifted a decades-long embargo on lethal arms sales to Vietnam. Two US aircraft carriers have since visited the central coastal city of Danang, and America has transferfed 24 patrol boats as well as two high-endurance cutters to Vietnam.

Former US national security advisor Robert O’Brien said during a late-November trip to Hanoi that Vietnam is interested in more information-sharing between militaries as well as obtaining additional US Coast Guard equipment. Officials also expressed a desire for US companies to be involved in offshore oil and gas projects as a hedge against Chinese interference, he said.

As Vietnamese leaders gathered in Hanoi, China announced it will conduct military exercises in the Gulf of Tonkin from Wednesday to Saturday.

Trọng, who did not mention China, said Vietnam is determined to defend its independence and sovereignty and will “properly and effectively handle relations with large countries and neighbouring countries”.