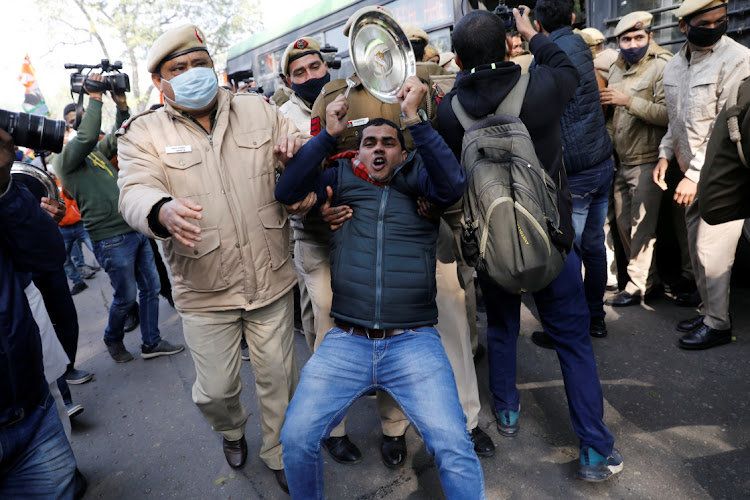 Mumbai/New Delhi — Two of India’s richest men have landed in an unlikely controversy over farming laws, becoming targets of protesters who allege the tycoons have benefited from their close links to Prime Minister Narendra Modi.

For weeks, tens of thousands of farmers have camped outside the nation’s capital, demanding the withdrawal of recently passed legislation they say, without evidence, was designed to allow billionaires such as Mukesh Ambani and Gautam Adani to enter farming. The tycoons say they have no such interest. More than 1,500 phone towers of Ambani’s wireless carrier were vandalised in December and farmers called for a boycott of their businesses.

The fight between the government and the farmers has revived the debate on what Modi’s critics call a cosy nexus between the magnates and the popular leader — accusations they all have denied. The protests, one of Modi’s toughest political challenges yet, follow an eventful 2020 when the combined fortunes of Ambani and Adani swelled by almost $41bn, even as millions of Indians lost their jobs to the pandemic that pummelled the $2.9-trillion economy.

“Everyone loves to hate the rich in times of economic stress,” said Sanjiv Bhasin, a director at investment management firm IIFL Securities in Mumbai. “People are venting out their anger at social disparity. It is indeed a new business risk to these large conglomerates. But all the noise will settle when the economy starts growing.”

Highlighting the disparity, an Oxfam report in January 2020 said India’s richest 1% hold more than four times the wealth of 953-million people who make up the poorest 70% of the country’s population. The wealth of the nation’s top nine billionaires is equivalent to the wealth of the bottom 50% of the population, according to the non-profit body that works against inequality.

The new farm legislation, passed in September, will allow private companies to buy produce directly from farmers, moving from the decades-old system of state-run wholesale buyers and markets that guaranteed a minimum support price. India’s top court last week barred the implementation of the law until the court decides on the matter.

Farmers, mostly from the northern state of Punjab, fear that the removal of state support will make them vulnerable to market-driven price fluctuations despite government assurances that a safety net of minimum support prices will continue. About 800-milion of the country’s more than 1.3-billion people depend directly or indirectly on agriculture, giving the group political clout.

Modi, who won a second consecutive five-year term in 2019 with an even bigger majority, has tweeted several times to allay concerns, saying the new laws will cut out middlemen, make farmers more prosperous and India self-reliant.

Still, Modi risks letting this political headache snowball into a serious threat. After referring to his administration years back as a “suit-boot ki sarkar” — meaning a government that favours the business elite over the poor — opposition parties are seizing the opportunity to hit out at him.

Responding to the accusations, Ambani’s $174bn conglomerate Reliance Industries issued a statement earlier in January saying it has never done contract farming or acquired farm land for that purpose, and has no plans to do so. It also vowed to ensure its suppliers will pay government-mandated minimum prices to farmers. The Adani Group clarified in a statement in December that it does not buy food grain from farmers or influence prices.

Both Adani and Ambani hail from the western Indian state of Gujarat, just like Modi, who served as the state’s chief for more than a decade. Both tycoons have repeatedly aligned their business strategies to Modi’s nation-building initiatives.

About two decades ago, Adani cemented his ties to Modi by publicly backing him when a crisis threatened to end the rising politician’s career. Modi was under attack by rivals and businessmen who accused him of failing to prevent bloody sectarian riots in his home state in 2002. Adani created a rival regional industry lobby and helped kick off a biannual global investment summit in Gujarat in 2003 that boosted Modi’s pro-business credentials.

Like South Korea’s famed chaebol, Indian conglomerates have been at the forefront of India’s economic growth, especially since a currency crisis forced the government in 1991 to review decades of Soviet-style planning. The modest reforms kicked off three decades ago started allowing private investment in sectors that were mostly controlled by the government. With strained state finances, the capital-starved economy has looked more and more to these tycoons for investments and jobs.

Ambani spent most of 2020 raising $27bn in equity investments — a record for India — for his technology and retail businesses from investors including Google and Facebook. He has spelt out an ambitious plan to build these units into a powerful local e-commerce rival to Amazon and Walmart. The Adani group, which started off as a commodities trader in 1988, has grown rapidly to become India’s top private-sector port operator and power generator.

“India’s position is similar to America’s Gilded Age, with Ambani and Adani like the modern-day Rockefellers and Vanderbilts in the second half of the 19th century,” said James Crabtree, author of The Billionaire Raj: A Journey Through India’s New Gilded Age.

During the so-called Gilded Age, the US saw rapid growth and industrialisation, helmed mostly by a clutch of powerful business families. But this also led to worsening inequality that sparked labour unrest and railroad strikes. The US government eventually stepped in.

To be fair, many East Asian nations have followed this developmental path of relying on their “favourite tycoons for nation-building”, Crabtree said, but they were mostly autocratic regimes. “The questions for India are: is this the right model, and can India even pull it off?”

The farmers who are protesting are worried by the scale of the ambitions the two tycoons have. They are pressing for the laws to be withdrawn and demanding a guaranteed minimum support price for their produce.

“Farmers think these two big corporate houses have links with the power centre of India and they have become symbols of crony capitalism,” said Darshan Pal, a senior leader of the Krantikari Kisan Union from Punjab.

Separately, Adani’s bid for an airport lease is facing opposition after the local government in the southern state of Kerala challenged it legally. A state minister said in 2020 that Adani winning the bid was “an act of brazen cronyism”.

In an Indian court, the Adani group rejected the allegations and said it won the bid through a competitive process. The supreme court is scheduled to hear Kerala’s appeal soon, after a lower court ruled in Adani’s favour.

As a result of the protests, many retail stores of Reliance have remained shut for months in Punjab, causing millions of dollars in losses. Appealing to the Punjab government in December, Reliance sought protection for its infrastructure and workers, according to a letter seen by Bloomberg News, the contents of which were confirmed by a company spokesperson. The conglomerate has also approached a court for remedy.

“As long as the gap in income and opportunity is not significantly narrowed via state policy, we can expect those at the top of the pyramid inviting the ire of the growing base of unfair and unequal India,” said Nikita Sud, who teaches international development at the University of Oxford.

Farmers fear the laws will lead to corporate control over agricultural production, with even some of Narendra Modi’s allies against the laws
World
3 months ago

Airlines are due to deliver 5.65-million vaccine doses on Tuesday to various cities
World
3 months ago