The 6.2 magnitude tremor has caused a power blackout, disrupted mobile phone networks and cut off road access, with 15,000 people relocated 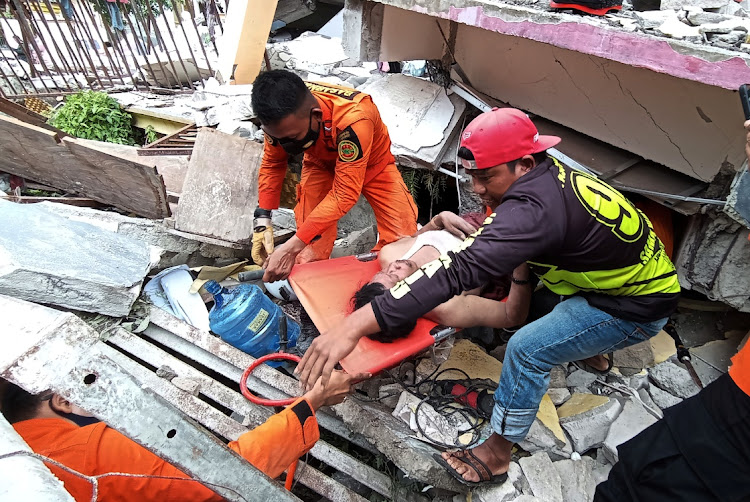 Rescuers evacuate a man from a hospital building that collapsed after an earthquake in Mamuju, West Sulawesi province, Indonesia, January 15 2021. Picture: ANTARA FOTO VIA REUTERS/AKBAR TADO

Jakarta — At least 34 people were killed and thousands evacuated after a 6.2 magnitude earthquake struck Indonesia’s West Sulawesi in the early hours Friday, according to the national disaster mitigation management.

More than 600 people were injured from the quake that damaged a hotel, the governor’s office, hundreds of houses and a local health facility, the agency, BNPB, said in a statement. About 15,000 people were relocated to 15 locations. It also caused a power blackout, disrupted mobile phone networks and cut off road access.

The island of Sulawesi accounts for more than 6% of the country’s GDP, with West Sulawesi’s economy mainly driven by agriculture.

Indonesia’s 18,000 islands sit along the Pacific Ocean’s “ring of fire” zone of active volcanoes and tectonic faults, making it prone to earthquakes.

The tremor rocked West Sulawesi at 1.28am. Jakarta time on Friday, with the epicentre 6km from the coast at a depth of 10km. It didn’t generate a tsunami.

“Residents are still advised to stay away from buildings and beaches” for fear of collapse and a tsunami could still occur in possible aftershocks, Dwikorita Karnawati, Indonesia’s head of Meteorological, Climatological, and Geophysical Agency said in a briefing.

President Joko Widodo called citizens to remain calm and has ordered authorities to take emergency responses to find and evacuate the victims.

Indonesia’s state energy holding company Pertamina said there’s no meaningful damage to its fuel distribution and facilities. As many as 872 electricity distribution points were affected by the quake with half of them restored, state power firm Perusahaan Listrik Negara said in a statement.

Nearby airports are running normally despite minor damage to one of them, according to the transport ministry.

The 6.3 tremblor felled buildings with at least one person dead, while the EU has offered its full support
World
3 months ago

Turkish officials put the quake at 6.6 but the US put it at 7.0, with the epicentre about17km off the coast of the Izmir province
World
5 months ago

The black boxes will provide more information on what caused the plane to plunge more than 3,000m in a matter of seconds.
World
3 months ago
Next Article

At least 21 dead in 6.4-magnitude earthquake in Albania

At least 21 dead in 6.4-magnitude earthquake in Albania