New Chinese vaccine easier to store, but not as effective as similar efforts 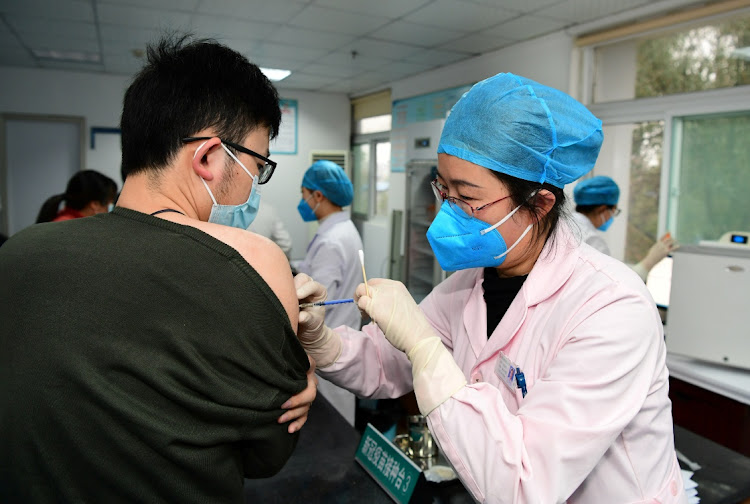 A medical worker administers a dose of a coronavirus vaccine in Hefei, Anhui province, China. Picture: CNSPHOTO VIA REUTERS

Beijing — State-backed vaccine developer China National Biotec Group (CNBG) said one of its shots is effective in preventing Covid-19 in 79.3% of people, allowing it to apply for authorisation to market the inoculation for use in the general population.

The interim data shows the vaccine, which is already authorised for emergency use in China, is safe and people who took the shots in the trial all generated high levels of antibodies, according to a statement posted on the website of Beijing Biological Products Institute, a subsidiary of CNBG’s parent Sinopharm.

The rate for the vaccine — one of two developed by CNBG — meets the minimum standard of 50% efficacy set by US regulators for emergency authorisation of Covid vaccines. However, vaccines using cutting-edge messenger RNA technology from Moderna and Pfizer have produced far better results, reducing symptomatic Covid-19 cases by well more than 90% in giant trials.

The rate announced on Wednesday for the CNBG shot is also lower than what was reported from trials in the United Arab Emirates (UAE), which put the protection level at 86%.

A state-owned drugmaker that has a dominant share of China’s vaccine market, CNBG in April was among the world’s first to push experimental shots to the crucial final stage of human testing. The company’s research institutes developed two shots using an inactivated version of the virus to stimulate immune response, an approach widely adopted by many of the existing vaccines used to prevent illness around the world.

Such vaccines have the advantage of easier storage and distribution as they do not need to be frozen — unlike the experimental mRNA vaccines being developed by Pfizer and Moderna. CNBG’s shots can be stored at normal refrigerator temperatures, making distribution to rural areas and developing countries easier.

CNBG has vaccine supply agreements with several developing countries including Malaysia, Brazil, Pakistan and the UAE, according to public reports compiled by Bloomberg. Leading Western developers such as AstraZeneca and Pfizer have inked agreements with far more countries.

Although China’s vaccines have not yet received regulatory approval for widespread use, doses have already been given to hundreds of thousands of people in China under an emergency-use programme in place since midyear. That has raised concern among scientists of potential risks in using shots whose safety has yet to be thoroughly studied.

Latest on worldwide spread of the coronavirus

Nearly 50% of South Africans are leery about getting a Covid-19 vaccine, says Ipsos-WEF survey

Only 53% said they are likely to get a shot, despite so much being done to ensure the country gets vaccines as soon as possible
National
6 months ago

Responding to the study, a UK health department spokesperson said that the rate of vaccination will increase as millions more doses become available
World
6 months ago
Next Article