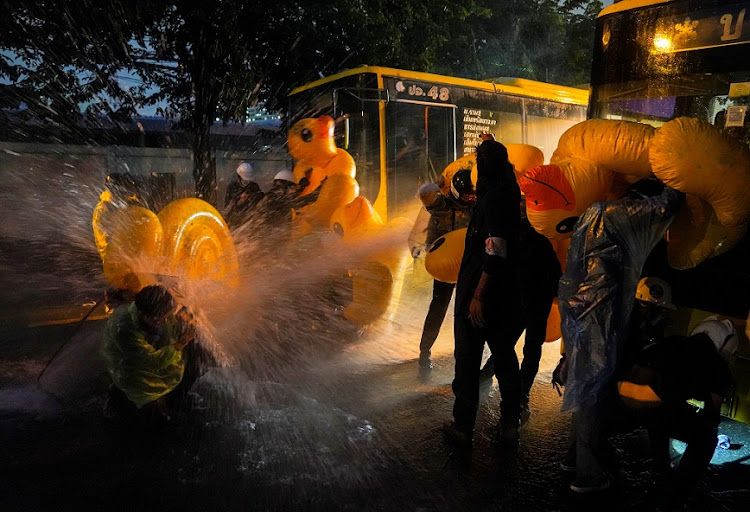 Pro-democracy demonstrators use inflatable rubber ducks to protect themselves from water cannons during protests in Bangkok. Picture: REUTERS/ATHIT PERAWONGMETHA

Bangkok — Anti-government protesters in Thailand are planning to expand their set of demands after generating “significant” support for a movement that’s broken long-held taboos about publicly criticising the monarchy.

After four months of regular street protests, the youth-led groups will also take on issues such as changes in the crown property laws and the recognition of same-sex marriage, according to Arnon Nampa, one of the movement’s most prominent leaders.

“People may think that this movement only talks about the monarchy — at the heart of the movement is actually equality and liberty,” Arnon said in an interview. “Many protesters have fought for various issues to create a more equal society. The demand for monarchy reform really started from our fight for equality.”

The parliament voted on Wednesday to amend the nation’s constitution by setting up a charter rewriting committee, but rejected a push by pro-democracy groups to include changes to chapters governing the monarchy. And while the amendments may not result in changes the protesters are asking for, such as monarchy reform, it is “a long-term fight,” Arnon said.

Arnon, who was the first protest leader to publicly question the monarchy, said the movement has already “succeeded strategically in getting people to talk about these issues openly”. It’s also prompted some reaction from the palace, with members of the royal family engaging with the public more often in the past few months.

King Maha Vajiralongkorn said earlier this month that Thailand is a “land of compromise” and that he loved the people “all the same”. But the protesters rejected his olive branch as well as the government’s efforts to de-escalate the situation by attempting to set up a reconciliation committee and lifting the state of emergency to curb protests in Bangkok a week after it was declared.

The pro-democracy protest movement has escalated in recent days after police fired water cannons at the protesters and injured dozens on Tuesday. Several demonstrators also clashed with pro-royalist supporters, who have resisted changing the country’s existing power structure and the monarchy’s role — a confrontation that Arnon expects will intensify next year.

Prime Minister Prayuth Chan-Ocha, who has repeatedly rejected calls to quit, toughened his stance on Thursday, saying the government and security agencies “will now enforce all laws available to deal with protesters who break the law and ignore other people’s rights and freedom”.

“The protest situation is still escalating and may lead to more conflict and violence. If we allow this to continue, it would cause damage to our nation, our beloved monarchy, and the peace and safety of the public,” Prayuth said in a statement.

Arnon, like many of the movement’s prominent leaders, has been arrested and released several times for staging protests and is facing charges that include sedition.

Royal reform is the most ambitious demand from the protesters, with calls for the monarch to no longer endorse coups, provide transparency in how funds are spent, and get rid of laws that stifle discussion of the royal family. But the protesters are also calling for the resignation of Prayuth and the rewriting of the constitution.

The current charter was written by a military-appointed panel after Prayuth, a former army chief, took power in a 2014 coup. The protesters want to rewrite the charter that they view as instrumental in helping him retain his power after the 2019 elections. They regard the monarchy, the nation’s most powerful institution, as playing a role in securing the establishment’s grip on power.

On Wednesday, thousands of protesters met in central Bangkok to protest the police crackdown and the parliament’s decision. The protest organisers plan at least two key gatherings in early December before taking a break until January, according to Arnon. One event is expected to be held on Constitution Day, and another ahead of the constitutional court’s ruling on Prayuth’s qualification as premier. If the court disqualifies Prayuth, it would be the first sign of compromise from the establishment, he said.

“The changes we want to see will take some time to achieve,” Arnon said. “Ten years from now, the generation that’s protesting now will be the majority. There will be changes. They won’t be able to resist change.”

Many Thais have questioned why the queen was on a particular road when protests were taking place at that time, and have challenged the severity of ...
World
1 year ago

Authorities are not used to protests being organised in real-time in cyberspace, but shutting social media down would cause more chaos
World
1 year ago