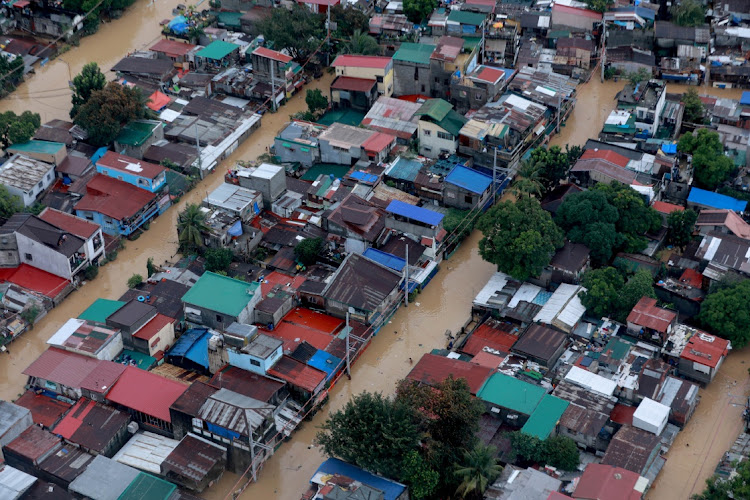 An aerial view of the flooding in Manila, Philippines, as Typhoon Vamco unleashed some of the worst flooding in years in the capital, on November 12 2020. Picture: PRESIDENTIAL PHOTO HANDOUT/VIA REUTERS

Manila — Police and soldiers in the Philippines searched for dozens of people still missing on Thursday after Typhoon Vamco killed at least 39 people and caused some of the worst flooding in years in the capital Manila and nearby provinces.

Vamco, the 21st and most deadly cyclone to hit the country this year, tore through the main island of Luzon late on Wednesday and early Thursday, just as the country was reeling from Goni, the world’s strongest typhoon of 2020, which killed 25 people and flattened thousands of homes.

Successive typhoons — eight in the past two months — add to the challenges of a government battling community coronavirus infections and an economic recession.

Among the casualties, two men drowned and a child was killed in a landslide in Camarines province. Three people died when a warehouse collapsed in Cavite province.

The casualty count is subject to validation by local officials and the disaster agency, which has so far recorded 14 deaths and three missing.

Tens of thousands of homes were submerged, though water levels started to recede in parts of the badly hit Marikina suburb, allowing residents to start clean-ups after returning to homes covered in debris and caked in mud.

“We don’t know how to start cleaning. Mud is so thick up to the second floor,” Gilbert Gaston, a Marikina resident, told DZMM radio.

Many residents took refuge on rooftops and were among some 6,000 people rescued across Manila’s suburbs. Government agencies were clearing landslides and debris elsewhere, defence secretary Delfin Lorenzana said.

About 500,000 households in and around the capital were without power and virtual classes and government work was suspended in Luzon, home to half of the Philippines’ 108-million population.

Vamco is approaching central Vietnam, where devastating floods and mudslides since early October have killed at least 160 people. It is expected to make landfall on Saturday.

Heatwaves, droughts and floods could wipe out many endemic species
World
6 months ago

Storm becomes a hurricane as it nears Gulf of Mexico

Delta’s track places the Yucatan, struck days ago by a tropical storm, directly in its path
World
7 months ago
Next Article