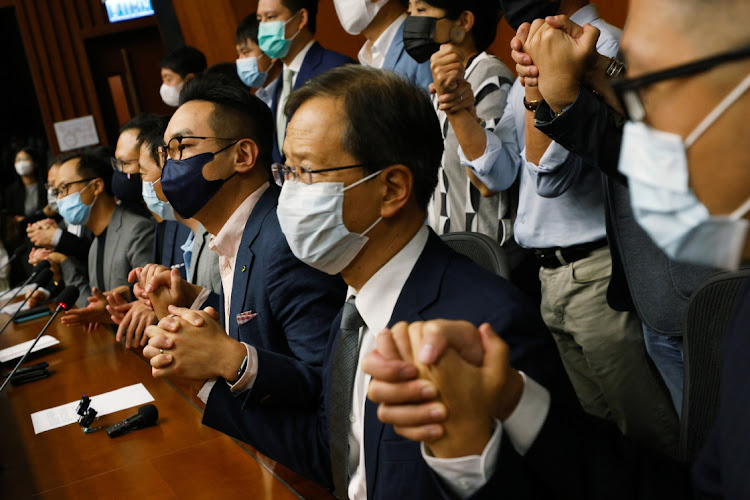 Pan-democratic legislators including Kenneth Leung, Dennis Kwok, Wu Chi-wai, Alvin Yeung and Kwok Ka-ki join their hands together during a news conference as they threat with mass resignations amid reports on Beijing plans to disqualify four opposition lawmakers, in Hong Kong on November 9 2020. Picture: REUTERS/Tyrone Siu

Hong Kong — Pro-democracy politicians in Hong Kong have said they would quit en masse if Beijing moves to disqualify any individual members of the legislative council.

The threat to resign comes after a report on Monday from news site HK01 that said China’s National People’s Congress (NPC) standing committee was expected to consider disqualifying at least four opposition members from the legislature as it begins a two-day meeting on Tuesday. The gatherings were likely to result in the disqualification of Dennis Kwok, Kwok Ka-ki, Kenneth Leung and Alvin Yeung, the news site said, leaving the 70-seat legislative council with just 16 opposition legislators.

“We must quit together if the NPC disqualifies all of us,” Democratic Party chair Wu Chi Wai said at the pro-democracy camp’s evening press conference, where the politicians emerged clasping hands. “It will be the strongest objection to this ridiculous decision.”

China has taken a series of unprecedented steps to intervene in the affairs of the former British colony since a wave of historically large and sometimes violent democracy protests gripped the city in 2019. Since June the Chinese government has imposed a sweeping national security law and extended the terms of sitting legislators to allow the local government to delay local elections for a year.

Any move to disqualify elected legislators would underscore international concerns about Hong Kong’s autonomy just as president-elect Joe Biden prepares to take office on a promise to defend democratic values around the world. The Trump administration earlier this year levelled sanctions against 10 officials over their roles in curbing Hong Kong’s autonomy.

While the HK01 report didn’t specify the grounds for disqualification, the four legislators have been criticised by authorities for using delay tactics common in democratic legislatures around the world. All four had been previously barred from seeking re-election to the chamber, another tactic the government has used to silence its critics.

Hong Kong’s sole delegate to the NPC standing committee, Tam Yiu-chung, warned that legislators who engage in delay tactics “are not suitable” for public office, the South China Morning Post newspaper reported separately on Monday. “It isn’t good to use various means to disrupt [the council’s] normal operation,” Tam said.

Such disqualifications raise new questions about the future of Hong Kong’s opposition, which has used the legislature as a platform to challenge Beijing’s agenda since the city’s return to Chinese rule in 1997. After several radical “localist” activists were among a record 29 opposition legislators elected in 2016, China handed down a ruling that led to the disqualification of half a dozen legislators.

Two opposition legislators resigned their seats in September in protest against China’s decision to extend the legislature’s term by a year without an election. Several remaining legislators are also facing criminal charges related to protests against the government, including seven charged in recent months with participating in a May scuffle at the legislative council.

While most expect the US will shift its approach in dealing with China, they also say a protracted rivalry is here to stay
World
8 months ago

Lam Chiu-ying says environmental policy is always at the bottom of the Hong Kong government agenda, which makes him ‘ashamed’
World
9 months ago
Next Article