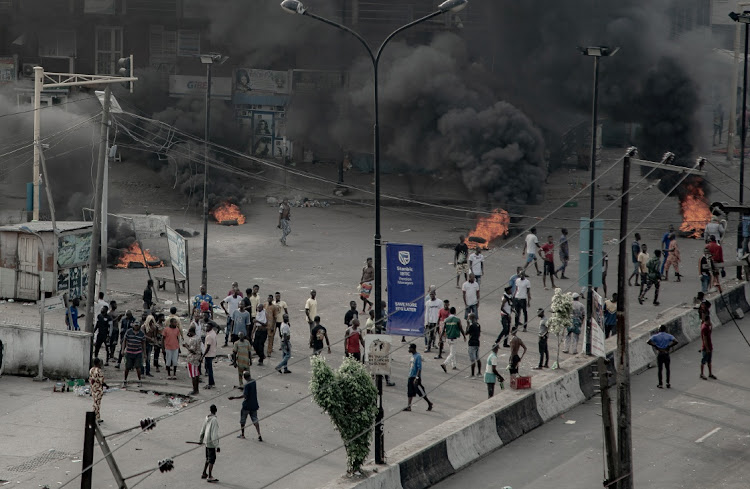 People are seen near burning tires on the street, in Lagos, Nigeria October 21 2020, in this image obtained from social media. Picture: REUTERS/UNEARTHICAL

Lagos — Gangs armed with knives and sticks blocked major roads in Lagos on Friday, with many angered by a speech by Nigeria’s president in which he appealed for calm but failed to condemn the killing of protesters demanding an end to alleged police brutality.

The unrest is the worst street violence since Nigeria’s return to civilian rule in 1999 and the most serious political crisis confronting President Muhammadu Buhari, a former military leader who came to power at the ballot box in 2015.

A highway leading to the international airport was obstructed by blockades manned by groups of young men demanding cash from motorists. Buses whose drivers refused to pay were destroyed, a Reuters witness said.

To the east of Lagos, in the Ibeju area of Lekki, armed men chased away police and several police stations were burnt to the ground. Petrol stations were closed and cash machines were not working in parts of the city.

Violence in Nigeria’s sprawling commercial hub, a city of 20-million, has escalated since Tuesday night, when a curfew was announced.

Amnesty International said soldiers and police killed at least 12 protesters in Lekki and Alausa, another Lagos district on Tuesday. On Thursday, Amnesty, Human Rights Watch and 40 other groups called for an “immediate and thorough investigation” into the incident.

The army has denied soldiers were at the site of the Lekki shooting, where people had gathered in defiance of the curfew.

Buhari, in a national address late on Thursday, urged youths to “discontinue the street protests and constructively engage government in finding solutions”.

It was his first public address since the shootings began. Although he lamented the loss of innocent lives, he did not directly refer to the Lekki incident that sparked international condemnation.

Many of those on the streets despite the curfew said Buhari's speech had angered them because of his failure to address the Lekki incident.

“What we expected is not what we heard from him,” said businessperson Lekan Shonibare. “We expected him to say something to condemn the killing, he never mentioned it in his broadcast.”

Buhari on Friday held talks with former Nigerian presidents including his immediate predecessor, Goodluck Jonathan, and Olusegun Obasanjo, one of his aides said on Twitter.

Lagos authorities have struggled to enforce a round-the-clock curfew imposed as anger over the killings rose. One man on the road said military rule was better than what the country has now.

Reuters witnesses saw two military vans pass the airport but they ignored the armed men who were stopping, and in some cases attacking, cars and buses. Another Reuters witness saw men in plain clothes carrying guns and machetes on the streets in the Ikeja area of the city.

Gunshots were audible in Ikoyi, an affluent neighbourhood, a resident told Reuters. Occupants of an apartment block were told to avoid windows and balconies.

Tricycle rickshaw operator Victor Orji said any protests should be peaceful. “I am seeing what is happening, burning police stations, burning everywhere, that was not the right thing to do,” he said.

Disruption has not been limited to Lagos. Several states in southern Nigeria have imposed curfews days after two weeks of confrontations between security services and protesters.

In addition to anger within Nigeria at the shooting of protesters, the incident has prompted a wave of criticism of Nigerian authorities and the behaviour of its security forces.

The UN Human Rights chief said there was “little doubt that this was a case of excessive use of force”, while US presidential candidate Joe Biden and former US secretary of state Hillary Clinton both condemned the use of violence against protesters.

A delegation of US officials who were in Nigeria for previously scheduled meetings met the country’s vice-president on Thursday and condemned the “use of excessive force by military forces who fired on unarmed demonstrators in Lagos,” a state department spokesperson said.

Buhari, in his address, encouraged the international community to “know all facts available” before rushing to judgment.

Unclear if person who died in Lagos hospital was a protester, says governor

Thousands of Nigerians have held protests that initially focused the police’s Special Anti-Robbery Squad, which rights groups have accused of ...
World
11 months ago

Lockdown day 209: Pictures of the day

Nigerians based in South Africa marched to parliament in Cape Town to join the #EndSARS protests in solidarity with Nigerian youths who are ...
News & Fox
11 months ago

Protesters in Abuja, Lagos and other towns have sealed off major roads and bridges, disrupted flights and brought many businesses to a standstill
World
11 months ago
Next Article