Singapore Airlines sold out seats to eat lunch on a grounded jet at the airport. Tickets ranged from $40 for economy to $474 for a private suite 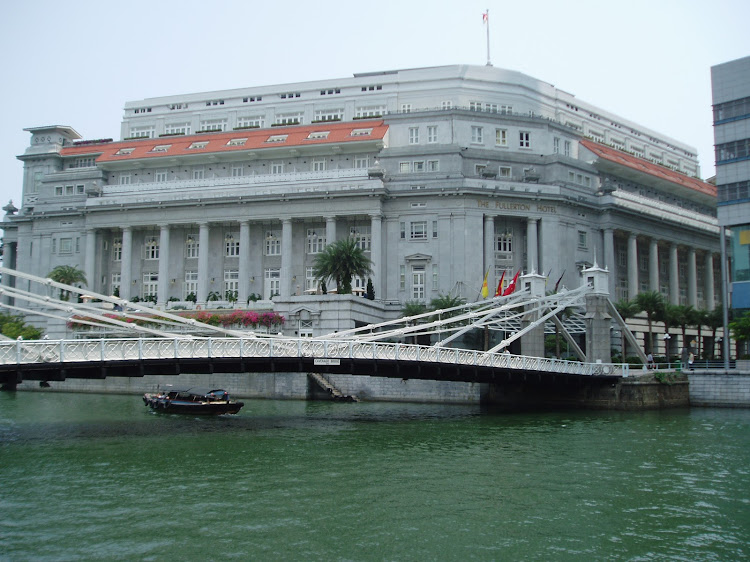 The Fullerton Hotel in Singapore, where travelers, even when they can't travel, are used to the good life. Picture: KATY CHANCE

Affluent, food-loving Singaporeans aren’t averse to spending $500 on a meal. But generally, they expect that it’ll come with a bit of ambience. Thanks to the pandemic, that bar has been lowered.

On Monday, Singapore Airlines sold out seats to eat lunch on a grounded jet at the airport. Tickets ranged from $40 for economy to $474 for a private suite. Demand is so strong that the airline is adding dinner service and extra days to what was supposed to be a two-day stunt. For those who miss out, it will even deliver meals, along with an amenity kit, to a private residence for a mere $650.

As airplane food good goes, it doesn’t get much better than Singapore Airlines. But nobody pays the price of an economy-class ticket to Tokyo for the privilege of eating reheated food, no matter how good. Instead they’re paying a premium for a brief, nostalgic trip back to normality — when normality meant the ability to travel on demand. For a global travel industry beaten down by Covid-19, that perhaps offers a glimmer of hope.

There are few places where international travel plays a bigger role in the culture and economy than in Singapore, a 725km2 island with an unusually rich and diverse array of urban and rural attractions. But the country’s small size and easy proximity to Indonesia and Malaysia have allowed Singaporeans to take for granted their ability to cross borders. On weekends, Singaporean licence plates are as common in southern Malaysia as New York plates are in Pennsylvania.

Singapore’s role as a global logistics and finance hub has also spurred its travel industry. For decades, the government has encouraged the recruitment of foreign businesses and workers. Non-Singaporeans comprise 57% of financial-sector senior management roles in the country, for example. And the government has continually updated its airport to attract more visitors and encourage airlines to make the city a layover hub.

It has succeeded beyond anyone’s expectations. Changi Airport regularly wins major awards and its traffic has soared. In a distinctive twist, it has also long been a place for locals to hang out. In part, this is practical: most Singaporeans live within 30 minutes of the all-night, air-conditioned facility and its range of restaurants and shops (many of which are located outside security). But it also reflects Singapore’s globalised outlook.

There’s a comfort level with being connected to those who choose to visit their city-state, and reciprocating those visits with huge volumes of outward travel.

Nowhere was that embrace of globalisation more evident than in Jewel, a massive retail-and-entertainment hub that opened at Changi in 2019. It was partly intended to transform the airport into a new city centre, complete with the world’s largest indoor waterfall. The city expects 60% of the visitors to be locals; during its first week of operation, more than 500,000 visited. Hours-long waits for some restaurants were common.

That kind of leisure feels like it belongs to a bygone area. In January, Singapore welcomed nearly 1.7 million international visitors; in April, it welcomed 750. As recently as August, there were 99% fewer passengers — local or foreign — moving through the airport than during the same period last year. The financial hit to Singapore has been immense: Travel and tourism account for about 11% of its total GDP.

But the cultural effects may prove more glaring. Globally minded expatriates are rethinking their commitments to the region now that it’s cut off; locals, meanwhile, are so desperate to resume roaming that they’re booking thousands of cruises — arguably the most infectious form of travel — that go in circles for a couple of days, then return home. Spending a fortune on an on-board meal for a flight that never departs might seem sane by comparison.

The main obstacle still facing the business, of course, is safety. One recent survey of traveler sentiment in Southeast Asia found that most people will only resume taking trips when reasonable precautions, including safe distancing and empty seats on flights, are taken. Bargain pricing, previously a key driver for the growth of travel in Singapore and Southeast Asia, is no longer a top priority.

That probably won’t remain the case forever. But so long as stranded travelers are willing to spend exorbitantly on airplane food, travel authorities should take the opportunity to spend — and charge for — better safety. A good first step would be to roll out rapid pre-flight testing and to establish travel corridors or bubbles between countries that implement it. Doing so won’t be cheap or easy, but travelers — especially in hubs like Singapore — should be willing to pay surcharges for the added peace of mind.

That won’t guarantee a speedy return to the globalised world so many took for granted. But it’s a good way to put at least a few grounded planes back in the air.

Dino Michael, in charge of refurbishing the Waldorf Astoria and Conrad in New York, says such jobs take years longer than a pandemic, and wealthy ...
World
9 months ago

The storied New York hotel was bought in 2015 for $1.95bn; with Manhattan awash with luxury condos, will the buyer recoup their money?
World
1 year ago
Next Article