Anwar Ibrahim says he has the backing of more than 120 MPs in the 222-member parliament, and that Prime Minister Muhyiddin Yassin has lost his majority 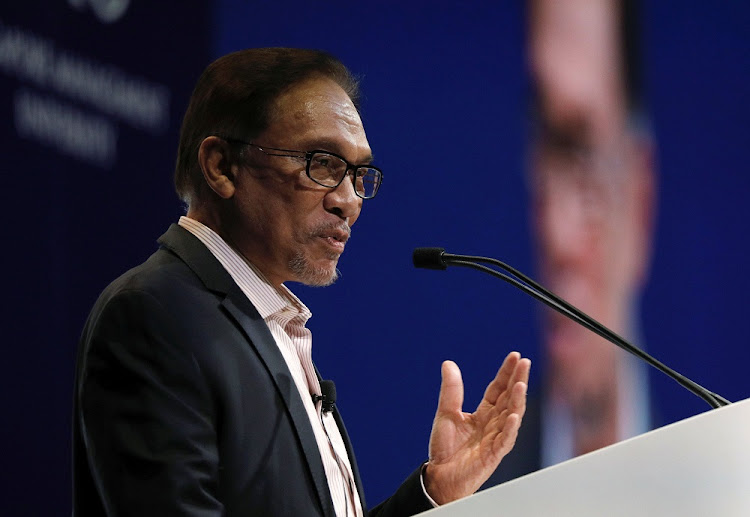 Kuala Lumpur — Malaysia’s Anwar Ibrahim said he presented statutory declarations to prove his majority to the king, who he said would now determine whether the opposition leader has enough support from legislators to form a new government.

Anwar said he had the backing of more than 120 legislators in the 222-member parliament, adding that Prime Minister Muhyiddin Yassin’s government had lost his majority and should resign. He urged everyone to allow the monarch, known as the Yang di-Pertuan Agong, to carry out his duties.

“I have presented a list of a convincing majority of MPs who support me to His Majesty,” Anwar said. “With these documents, it is abundantly clear that we have registered formidable convincing majority among parliamentarians.” The king assured him he would respect the constitution, and the issue of a snap election didn’t arise, Anwar added.

The palace disputed Anwar’s assertion he had provided names during their meeting and did not mention any plans for the king to interview party leaders. Anwar had presented the king with the number of MPs that he claimed supported him during their meeting that lasted about 25 minutes, said Indera Ahmad Fadil Shamsuddin, the palace’s Comptroller of the Royal Household, in a statement. “However, he did not provide the list of names of MPs supporting him to strengthen that claim.”

Malaysia’s benchmark stock index rose 0.1% as of 2.59pm local time, erasing an earlier decline of as much as 0.4%.

In September, Anwar announced that he commanded enough support to oust Muhyiddin, who took power in March with a margin of only a handful of votes after another coalition government collapsed. The current ruling bloc has said the move will fail.

“If the king is not convinced that Muhyiddin has lost his majority, he would stay on as prime minister,” said political analyst Wong Chin Huat. Still, the prime minister won’t be out of the woods until at least December. Parliament is set to debate the federal budget for 2021 beginning November, and losing the budget vote would be similar to losing a vote of no confidence.

On Tuesday, Anwar reiterated his commitment to institutional reform, judicial independence and the rule of law.

“There’s no question about cutting deals with individuals as alleged by some quarters,” Anwar said.

The king has several options if he’s convinced that Anwar has the backing of a majority in parliament, including a dissolution of parliament, ordering a confidence vote or appointing him as the new prime minister. The monarch played a key role in interviewing legislators back in February after former Prime Minister Mahathir Mohamad resigned, triggering the instability that has gripped Malaysia for much of the year.

“Frankly, I do not think it will be a smooth and easy ride for Anwar,” said Oh Ei Sun, senior fellow at the Singapore Institute of International Affairs. It’s unlikely Anwar will succeed as the government would’ve used resources to lure back defectors from the time Anwar first staked claim to power three weeks ago, he said.

Malaysia ruling parties have dismissed Anwar’s move as a tactic to destabilise the country’s politics. At the weekend, they closed ranks around Muhyiddin.

The Barisan Nasional coalition supports Muhyiddin as prime minister and won’t work with Anwar, its secretary-general Annuar Musa wrote on Facebook. Annuar is also a party leader of the United Malays National Organisation, which Muhyiddin counts among his biggest supporters.

The Malaysian Chinese Association, one of the grouping’s members, in a separate statement said the party will not join or participate in any plans by Anwar to form a new government.

A snap election risks worsening Malaysia’s coronavirus outbreak. New infections surged to record highs weeks after a state election held in Sabah in September, fuelled by politicians who failed to follow social distancing guidelines when campaigning in the eastern state.

On Monday, the government imposed curbs on movement in its capital city of Kuala Lumpur, administrative capital Putrajaya and in the states of Selangor and Sabah, as the virus spread. The restrictions also pulled the nation’s key stock index down 0.8% at the close.