Australia sued for not disclosing climate as foreseeable risk 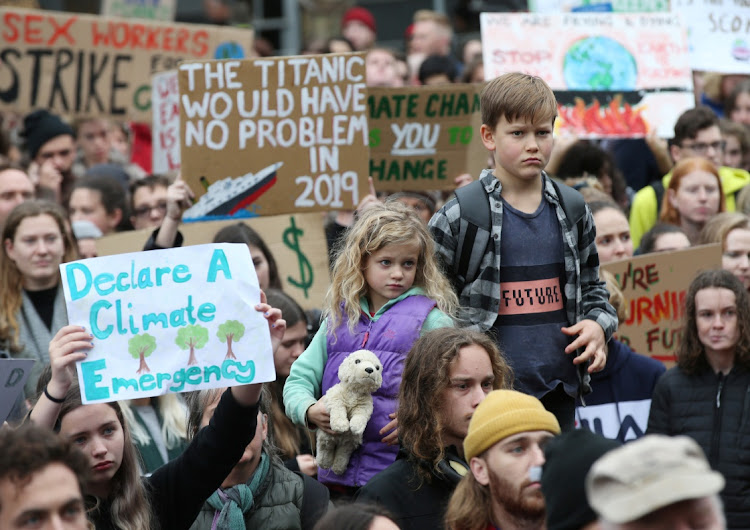 Protesters at a climate rally in Melbourne, Australia, in 2019. Picture: REUTERS

Melbourne — Australia’s government is being sued for not adequately disclosing the impact of climate change on its sovereign debt.

The class action filed in the federal court in Melbourne on Wednesday alleges the Australian Office of Financial Management (AOFM) and the treasury misled or deceived investors by failing to disclose climate change alongside other financial risks in its exchange-traded bonds, according to court documents.

The lawsuit seeks promotion of the debt to be halted until the disclosures are made.

Climate change is “definitely going to have a huge impact on our society, and definitely on our economy”, Kathleen O’Donnell, a student who is bringing the case, said by phone. “Investors need to be aware of this and the government needs to tell the truth about the climate risks we’re all going to be facing.”

AOFM CEO Rob Nicholl declined to comment. The Australian  treasury said it does not comment on matters relating to current court proceedings.

The case comes against a backdrop of increased activism around risk disclosures, amid growing concerns about the impact climate change could have on long-term investments. Mark McVeigh, an environmental scientist, is suing his pension fund in Australia for not adequately disclosing or assessing the impact of climate change on its portfolio. McVeigh’s lawyer David Barnden is representing O’Donnell in the class-action case brought against the government.

O’Donnell, who studies law in Melbourne, met Barnden at a lecture he gave on climate risk. She said she doesn’t belong to an activist group but is one of the “many millions of people who  want climate action”.

The publicly available “key risk” disclosure and product statement includes information about interest rate movements and default risks, and suggests looking at the national budget to assess the government’s fiscal position. The disclosures and the statement of risks to Australia’s finances in the fiscal 2020 budget make no specific mention of climate change or global warming.

O’Donnell’s case has merit as any material risk to investments and products being issued must be disclosed, said Anita Foerster, a senior lecturer of business law and taxation at Melbourne’s Monash University, specialising in climate change and regulation.

Australia’s financial regulators, including the Australian Securities and Investments Commission, have said climate change is a financially foreseeable risk.

“Private actors should be disclosing this to the market, so why shouldn’t public actors, such as the government, be doing the same, particularly if their regulators are saying other people should be doing it?” Foerster said by phone. “It’s a really important expansion of strategic climate litigation to a new class of defendant to further the argument that climate change is a financial risk.”

As the UK and France set laws for carton neutrality by 2050, oil and gas firms are getting ahead of the curve
Companies
8 months ago

NEWS ANALYSIS: The Covid recovery will be green (and already is)

Thwaites Glacier is melting at an alarming rate, triggering fears over rising sea levels
Life
8 months ago
Next Article

Sustainable and impact investing deliver on societal issues and returns

Sustainable and impact investing deliver on societal issues and returns