Slogans, songs and books are banned, and police have arrested at least 10 people, including a 15-year-old, for suspected threats to national security 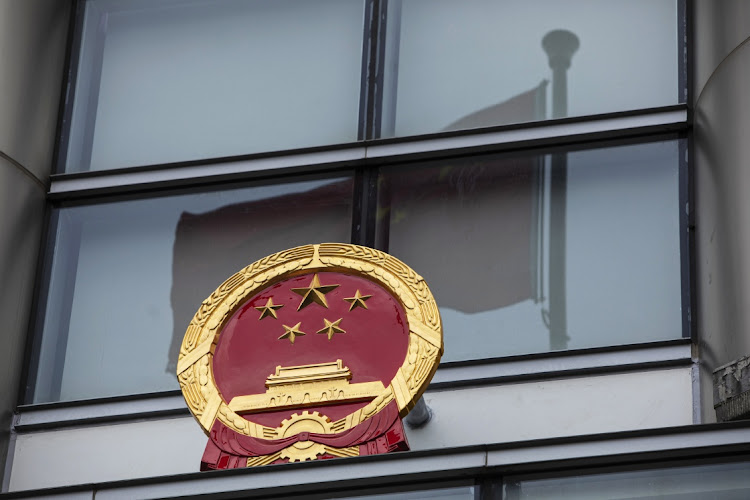 The Chinese emblem on the office for safeguarding national security in Hong Kong, temporarily set up at the Metropark Hotel, on July 8 2020. Picture: BLOOMBERG/CHAN LONG HEI

Hong Kong — China opened its powerful national security office in Hong Kong on Wednesday, turning a hotel near a city-centre park that has been one of the most popular venues for pro-democracy protests into its new headquarters.

The office, which operates beyond the scrutiny of local courts or other institutions, will oversee the Hong Kong government’s enforcement of the sweeping national security legislation Beijing imposed on the city last week.

The legislation gives its agents, operating openly in the global financial hub for the first time, enforcement powers. It allows them to take suspects across the border for trials in Communist Party-controlled courts and gives them special privileges, including that Hong Kong authorities cannot search or detain them, or even inspect their vehicles.

It was unclear how many mainland agents will be stationed in the former Metropark Hotel, a 266-room, 33-storey building in the shopping and commercial district of Causeway Bay, near Victoria Park.

At the opening ceremony, chief of the security office Zheng Yanxiong said he would enforce the law strictly “without infringing on the legitimate rights and interests of any individual or organisation”.

Luo Huining, head of China’s liaison office in the city, Beijing’s top representative office, said the office is “the gatekeeper of national security” and people who love China and Hong Kong welcome it.

“Those with ulterior motives and who are anti-China and seek to destabilise Hong Kong have not only stigmatised the office, but also smeared the legal system and rule of law on the Chinese mainland in an attempt to stir up unnecessary worries and fears among Hong Kong residents,” he said.

The new security law has pushed China’s freest city onto a more authoritarian path and drawn condemnation from some Western governments, lawyers and rights groups.

It punishes acts of secession, subversion, terrorism and collusion with foreign forces with up to life in prison. Police have arrested at least 10 people, including a 15-year-old, under it for suspected threats to China’s national security.

Critics fear it will crush coveted freedoms in the Chinese-ruled city, while supporters say it will bring stability after a year of sometimes violent protests that plunged the former British colony into its biggest crisis in decades.

Hong Kong and Beijing officials insist that rights and freedoms will remain intact, but say national security is a “red line”. The new security legislation has already started to change life in Hong Kong.

Books by some pro-democracy activists and politicians have been removed from public libraries. The “Liberate Hong Kong! Revolution of our times” slogan is now illegal. Activists have disbanded their organisations or fled. Shops have removed protest-themed products and decorations.

CEO Carrie Lam has said the security law is mild compared with that of other countries, without naming them, but pro-democracy advocates say its contents are vague and worry about Beijing authorities having final interpretation rights.

In a reflection of the widespread unease over the legislation, major US internet companies including Facebook, Microsoft, Google, Twitter and Zoom have announced they have suspended the processing of requests for user data from the Hong Kong authorities while they study it.

The US has begun removing Hong Kong’s special status in US law as Washington no longer deems the global financial hub sufficiently autonomous from mainland China.