The renewed Covid-19 lockdown follows the closure of Australia’s busiest border, between Victoria and New South Wales, on Tuesday night 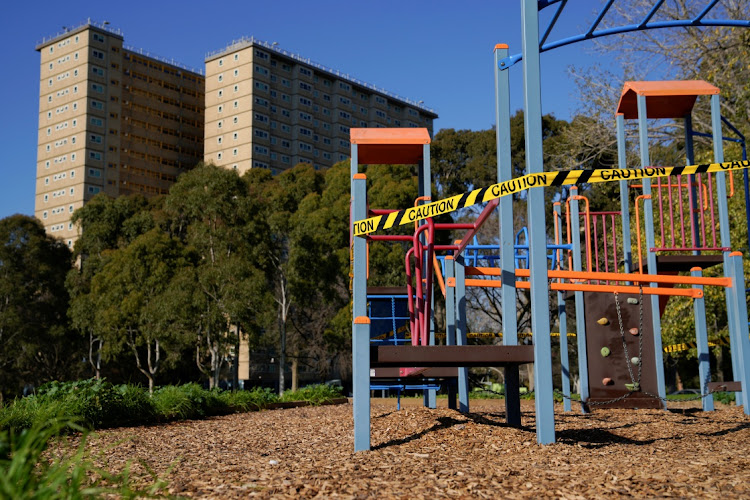 A playground is cordoned off with caution tape in front of a public housing tower, locked down in response to an outbreak of the coronavirus disease (COVID-19), in Melbourne, Australia, July 8, 2020. Picture: REUTERS/SANDRA SANDERS

Sydney — Five-million Australians face a heavy police clampdown from midnight on Wednesday to contain a flare-up of coronavirus cases, with checkpoints to be set up around Melbourne to ensure people stay at home.

State police said they would conduct random checks of vehicles on major roads surrounding the country's second most populous city, creating a “ring of steel” as partial lockdowns are reinstated for six weeks to stem a surge in infections.

“The community can expect to see ... checkpoints anytime and anywhere,” Victoria state police said in a statement.

Melburnians will be allowed to leave home only for essential business for the next six weeks. Cafes, bars, restaurants and gyms will shut again.

The renewed lockdown follows the closure of the country's busiest border, between Victoria and Australia's most populous state New South Wales, on Tuesday night.

“The rest of the country knows that the sacrifice that you're going through right now is not just for you and your own family, but it's for the broader Australian community,” Prime Minister Scott Morrison said during a televised media conference.

Morrison said he would take a proposal to a national cabinet of state and territory leaders on Friday, seeking to slow down the number of Australian citizens and permanent residents returning home from overseas. The two groups have been the only arrivals allowed since Australia closed its international border in March.

New Zealand announced on Tuesday that its national airline would not take new inbound bookings for three weeks to reduce the burden on overflowing quarantine facilities.

In Australia, red flags have been raised by potential quarantine breaches that the Victorian state government believes led to returnees spreading the virus. Officials have begun an inquiry.

Melbourne is the capital of Victoria state, which reported 134 new infections on Wednesday, down from the previous day's record 191 but well over the low single digit daily increases elsewhere in the country.

Fears of a broader resurgence were underscored by an official report of three new Covid-19 cases in the national capital, Canberra. Two of the infected people had returned from Melbourne last week, and the third was their housemate.

In Sydney, authorities were scrambling to track down 48 passengers who were allowed to disembark a flight from Melbourne overnight without being checked for Covid-19 symptoms.

The resurgence of the virus and imposition of fresh containment measures will make it tougher for the government to get the economy back on its feet as it sinks into its first recession in three decades. Federal treasurer Josh Frydenberg said the border closure and Melbourne lockdown would cost the economy up to A$1bn ($700m) per week.

At the Victoria and NSW border, police checkpoints caused delays of more than an hour for drivers. The state line is heavily trafficked by daily commuters who live and work on either side.

“I got a permit but with all the checks, my commute across was heavily delayed,” Amanda Cohn, who crosses the border from her home in NSW each day to reach the Victorian hospital where she works, told Reuters. “Plenty of others need to get across and they don't have a permit.”

Authorities had hastily set up a system to issue travel permits for a select group, but a website created to dispense passes crashed soon after its launch.

Victoria's only other internal border, with South Australia, has been closed since mid-March.

Among the new Covid-19 cases in Melbourne on Wednesday were 75 occupants of nine public housing towers that were placed into complete lockdown last week, barring their 3,000 residents from leaving for five days.

Nationwide, Australia has reported about 9,000 Covid-19 cases and 106 deaths from the virus.

What good will a lockdown really do, now that community transmission is well-entrenched? And what can it do to help a healthcare system that is ...
Opinion
2 years ago

A sense of fatalism or a sense of invincibility? The reasons for people flouting safety rules, and common sense, have complex underpinnings
National
2 years ago
Next Article