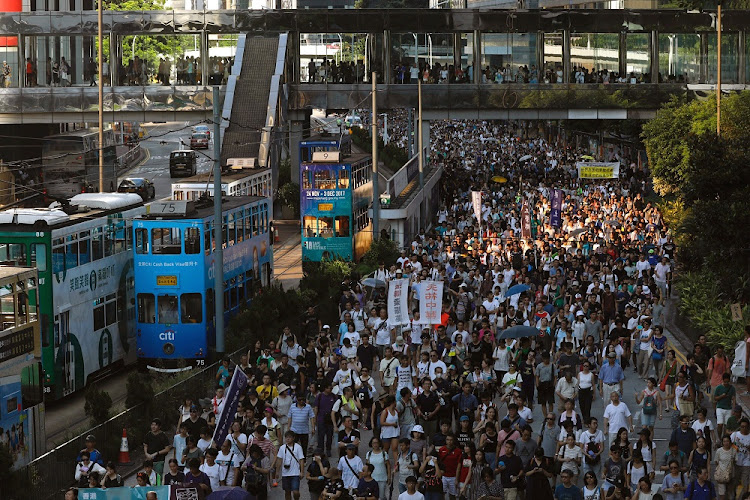 Hong Kong/Washington — Under the US-Hong Kong Policy Act of 1992, the US treats Hong Kong, a semi-autonomous part of China with its own legal and economic system, differently than the Chinese mainland in trade, commerce and other areas.

President Donald Trump has begun stripping away that “special status” to punish China for moves to tighten its grip on the city after a year of pro-democracy street protests. At its most extreme, that could mean the global financial hub being treated the same as any other Chinese city — a seismic shift that could harm both economies at an already difficult time. China has already begun retaliating.

Is the special status gone?

It is going. On May 27, secretary of sate Michael Pompeo notified Congress that the Trump administration no longer regarded Hong Kong as autonomous from mainland China. On June 29, commerce secretary Wilbur Ross said the special status had therefore been revoked.

What’s been the effect?

In an opening salvo, Pompeo announced visa restrictions against unspecified Chinese officials; China did the same against Americans. Pompeo said the US would also cease selling defence equipment to Hong Kong, a largely symbolic act that will mostly affect the city’s police and corrections forces. The commerce department made it harder to export sensitive US technology to Hong Kong by suspending special treatment in areas including export licence exceptions. Hong Kong’s leader said the impact would be “minimal”. More far-reaching measures could follow. The city is still treated differently from the mainland when it comes to tariffs, for instance.

It’s up to Trump to decide how quickly he wants to move while he has also threatened consequences for China over its handling of the coronavirus and its repression of minorities in Xinjiang province. Hurting China also carries additional risks for the US economy, including the US-China trade deal that Trump had considered one of his biggest achievements, which could affect his odds of winning re-election. Trump has made harsh comments but has not threatened specific punishments for the Beijing government.

What’s at stake for Hong Kong and China?

While Hong Kong remains a gateway from China to the rest of the world, it matters far less to the country’s fortunes than it once did. In 2019, 12% of China’s exports went to or through Hong Kong, down from 45% in 1992. China is also far less reliant on inflows of foreign capital and expertise, and has made a much lower priority of making the yuan an international currency. Nonetheless, the city still matters. Hong Kong’s open capital account and adherence to international standards of governance are unmatched by any mainland Chinese city and make it an important base for international banks and trading firms. Revoking the special status would be “the nuclear option” and “the beginning of the death of Hong Kong as we know it,” said Steve Tsang, director of the University of London’s SOAS China Institute.

And their financial markets?

One worst-case scenario: if the US treats Hong Kong no differently than any other Chinese city, why wouldn’t ratings firms and investors do the same? It’s a question posed by Deutsche Bank, which noted that S&P Global Ratings has Hong Kong three notches above China while Moody’s and Fitch have Hong Kong one notch higher. The risk is that China’s own rating gets lowered in coming years and drags Hong Kong’s with it. At the same time, equity index providers may take a fresh look at Hong Kong, which is now in the MSCI World index with other developed markets. China is in the emerging market index, raising the question, should Hong Kong be treated the same as Shanghai and Shenzhen?

What about for the US?

It has its own reasons for not rocking the boat too much. Hong Kong, the only semi-democratic jurisdiction under Chinese rule, offers US companies a relatively safe way to access the Chinese market and employs a US dollar peg, linking it with the American financial system. According to the Congressional Research Service, the largest US trade surplus in 2019 was with Hong Kong — $36bn. Hong Kong counted 278 US companies with regional headquarters in the city that year and another 457 with offices. Hong Kong’s first justice minister after the handover to China in 1997, Elsie Leung, told the South China Morning Post in May that any damage would be mutual: “We are not just getting the benefits — it’s a free-trade arrangement which is good for both sides.”

How has China responded?

Despite the US action, Chinese legislators approved new national security legislation for Hong Kong anyway. The foreign ministry has promised unspecified retaliation against what it terms foreign interference, insisting Hong Kong is purely an internal affair. China said in 2020 it would sanction some US-based activist groups including the National Endowment for Democracy, Human Rights Watch and Freedom House, and suspend port visits by US Navy ships to Hong Kong.

The official Xinhua News Agency has dismissed as “groundless” accusations about the loss of freedom or human rights issues in Hong Kong. It also noted that the 2018 Human Freedom index compiled by the Fraser Institute, a Vancouver-based think-tank, ranked Hong Kong at No 3, well ahead of the US at No 17.

The city’s leader, CEO Carrie Lam, has defended the national security law (as has Li Ka-shing, Hong Kong’s richest tycoon). Lam also has said it would be “totally unacceptable” for foreign legislatures to interfere in Hong Kong’s internal affairs, and that sanctions would only complicate the problems in the city. (Lam was selected in 2017 by a committee of 1,200 political insiders overwhelmingly loyal to the Chinese government.) She has sought to reassure investors that the city still adheres to the rule of law and has an independent judiciary. She also has defended police actions.

Is this what the protesters have been seeking?

As a largely leaderless movement, the Hong Kong protests have made no official request for international assistance. But some prominent activists including Jimmy Lai and Joshua Wong called on Trump to hit China hard with sanctions, even to the point of revoking the city’s special trading status. Wong had testified last year in Washington in favour of the bill, seeking to put pressure on China. On the streets of Hong Kong, some protesters have made clear their interest in US support by waving American flags, singing “The Star-Spangled Banner” and calling on Trump to “liberate” Hong Kong.