Hong Kong’s currency, equity and debt markets are used to attract foreign funds to the mainland 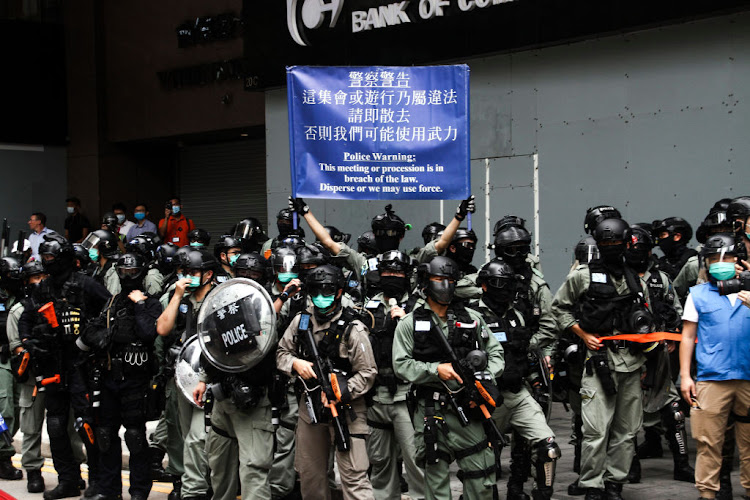 Police raise the blue flag in warning to gathering protesters during lunchtime street demonstrations in Hong Kong on May 27 2020. Picture: TOMMY WALKER/NURPhoto via GETTY IMAGES

Hong Kong — Bankers and investors fear China’s push to impose national security laws on Hong Kong threaten the city’s future as an international financial centre. If it gets to that stage, Beijing's move will come at a cost for China’s economy.

Why does China need Hong Kong as it is?

China still has extensive capital controls and often intervenes in its financial markets and banking system. Hong Kong is one of the world’s most open economies and one of the biggest channels for equity and debt financing.

The size of Hong Kong’s economy may only be the equivalent of 2.7% of mainland China’s, down from 18.4% in 1997 when it reverted to Chinese rule, but the territory punches above its weight due to world-class financial and legal systems.

As a gateway between China and the West, Hong Kong attracts global capital for China more efficiently than its other cities.

How is that changing?

Under the “one country, two systems” formula agreed as part of Britain’s handover of the territory to China, Hong Kong is guaranteed liberties unavailable on the mainland such as freedom of expression and an independent judiciary.

These freedoms give Hong Kong a special international status — for instance, it does not have to pay the US tariffs hitting Chinese imports.

With the US state department recommending the removal of that status as it no longer deems Hong Kong sufficiently autonomous from Beijing, measures hitting trade, finance and investments among other areas could follow.

Australia, Britain, Canada, the EU and others also have expressed concerns over the legislation.

What is at stake?

China uses Hong Kong’s currency, equity and debt markets to attract foreign funds, while international companies use Hong Kong as a launch pad to expand into the mainland.

While China has reformed its markets over the years, more than 60% of foreign direct investment (FDI) into and out of China continued to be channeled through Hong Kong from 2018, according to Morgan Stanley.

In 2019, Chinese companies raised $73.8bn via initial public offerings (IPOs), $35bn of which was bagged in Hong Kong, according to data from Dealogic.

Schemes linking stock exchanges in Hong Kong, Shanghai and Shenzhen provide the main gateway for foreigners to buy mainland stocks. A planned opening up of Chinese capital flows only increases the importance of these channels, and ultimately, Hong Kong, Fidelity said in a post this week.

Chinese banks hold more assets in Hong Kong — $1.1-trillion in 2019 — than lenders from any other region, according to Hong Kong Monetary Authority’s data compiled by Natixis. Any squeeze on the huge financing channel risks destabilising the Chinese economy.

Among other deep linkages, Hong Kong’s port continues to handle some of China’s exports and imports, though it has been eclipsed by big Chinese ports in the past few decades.

Hong Kong has also been pivotal to China’s ambition to turn the yuan into a widely used international currency, competing with the US dollar and increasing its global influence.

How could it all unravel?

The pandemic has prompted central banks around the world to flood markets with new liquidity. Money that would normally seek a home in Hong Kong may just choose other centres, such as Singapore, in time diminishing the city’s significance.

Capital already in Hong Kong could also choose to move outside the scope of mainland legislation and escape disruptions from local social unrest and any international restrictions. Outflows so far have been limited, bankers said

Britain, the US, Canada and Australia urge China to row back on security law plan
World
11 months ago