A number of sources say China's government has ramped up the paramilitary People's Armed Police presence in Hong Kong to as many as 4,000 personnel 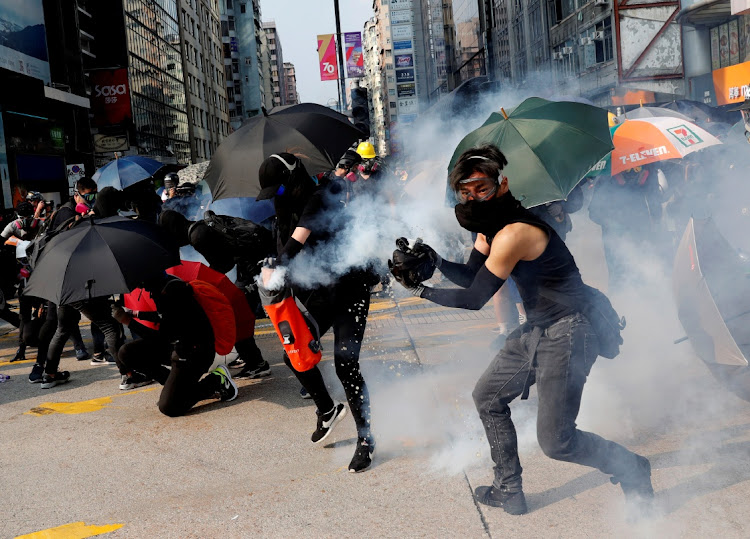 An anti-government demonstrator puts out a teargas canister with a bag holding water during a protest in front of Tsim Sha Tsui Police Station in Hong Kong in this photo taken on October 20 2019. Picture: REUTERS/KIM KYUNG-HOON

Hong Kong — Officers from China’s top internal security force — the People’s Armed Police — joined Hong Kong police on the front lines to observe antigovernment protests that peaked in 2019, according to a senior foreign diplomat and an opposition politician.

Hong Kong police took PAP officers to monitor the protesters and their tactics as part of a wider effort by the paramilitary force to deepen its understanding of the Hong Kong situation, they said.

To said he had reason to believe the Chinese forces included members of locally based PAP units.

The foreign diplomat, who requested anonymity and declined to be quoted due to sensitivity over commenting on security matters, also said PAP officers accompanied police to the front lines.

Responding to questions from Reuters, the Chinese Defence Ministry said the PAP was not stationed in Hong Kong, while a Hong Kong police spokesperson said they “stress that there is no such visit or observation by any members of the mainland law enforcement agencies”.

The State Council Information Office and the Central Government's Hong Kong Liaison Office did not respond to Reuters' questions.

The diplomat and three other foreign envoys, however, estimated that China's government had ramped up the paramilitary People's Armed Police (PAP) presence in Hong Kong to as many as 4,000 personnel — far more than previously known estimates.

Their assessments were based on intense scrutiny of the security forces' response to the pro-democracy protests, which began last June, but have ebbed in 2020 amid the ongoing coronavirus crisis.

Reuters had reported in September that an unknown number of PAP were among a surge in Chinese security forces moved quietly into bases across the city last year as Hong Kong's government struggled to contain the mounting political unrest.

The rapidly-modernised PAP is the mainland's core paramilitary and anti-riot force and operates separately from China's People's Liberation Army (PLA).

Under 2018 reforms, both the PAP and PLA are under the ultimate command of Chinese President Xi Jinping, who sits at the apex of the Communist Party's Central Military Commission.

While both Beijing and local Hong Kong authorities have been relatively open about the low-key role of the PLA in the city, they have never confirmed the presence of the PAP.

Some local legal experts and politicians fear the presence of the PAP — which has been devoted to internal security in mainland China — breaches the laws that protect Hong Kong's autonomy under Chinese rule.

Those laws provide for Beijing control over foreign affairs and defence, but give Hong Kong its own government, law enforcement bodies and legal system.

“I think the police and government should make clear what has been going on to ensure one country-two systems is being respected,” To said, adding that he believed the PAP presence would remain in the city for the foreseeable future.

Lawrence Li, a spokesperson for the Hong Kong government's security bureau, said outside law enforcement agencies, including from the mainland, did not have the authority to enforce laws within Hong Kong.

Neither To nor the foreign diplomats saw any sign yet that the PAP have taken enforcement measures in Hong Kong, or deployed from their bases in other than observation roles.

Force to reckon with

But the diplomats said that taken together with the numbers of PLA troops that also expanded in 2019, the estimated 12,000-strong force marks the largest ever Chinese security deployment in Hong Kong.

The PAP units are concentrated within PLA bases at the former British military forts at Stonecutters Island and Stanley on southern Hong Kong island — both shielded from public view, the diplomatic sources said.

The size of the force has stayed relatively static in recent months, they said.

The often violent street protests erupted over a now scrapped extradition bill that could have sent people to mainland China for trial, but they later broadened into wider calls for democracy.

While they have subsided during the health scare, many people expect the protests to resume ahead of local legislative elections in September.

Diplomatic envoys and security analysts say they are closely watching the PAP in Hong Kong, because they believe it, rather than the army, would spearhead any crackdown should the Communist Party leadership in Beijing choose to intervene in future protests.

They believe any such deployment remains unlikely, however, given Hong Kong's large and well equipped police force and the likely international impact of any such move.

Formed in 1982, the PAP was used to suppress insurrection and riots in restive mainland regions such as Xinjiang and Tibet.

Singapore-based military analyst Alexander Neill said the deployment of the PAP force to Hong Kong was a sign Beijing sees protests in the city as a vital issue of domestic security.

“Looking at it through that lens, it is a Chinese internal security problem and that is what the PAP is there for. That is their role, so I think they are going to be in Hong Kong for some time yet,” Neill said.

The PAP have their own vehicles, including amphibious armoured personnel carriers, bulldozers and barbed-wired laying trucks. They stage frequent and extensive anti-riot drills on the bases, the diplomatic sources said.

PLA commanders appear at some government and diplomatic functions as part of their traditionally symbolic role in Hong Kong, but the PAP has no such public role.

The Hong Kong police are preparing to take a tougher line against any resurgence in the demonstrations ahead of the elections in September, officials have said.

And the government's budget announced last month boosted spending on police by 25% to HK$25bn ($3.31bn), which will partly fund recruitment of 2,500 more officers for a force already 30,000-strong.

Assistant police commissioner Yuen Yuk-kin told reporters earlier in March that authorities were increasing monitoring of what he described as “local terrorism”, a threat he said was “gaining steam”.

ALEXIA WALKER: How the pandemic is changing the art world, and fast

Cathay Pacific warns of dire effects of Covid-19 on revenue

ALEXIA WALKER: How the pandemic is changing the art world, and fast

Cathay Pacific warns of dire effects of Covid-19 on revenue