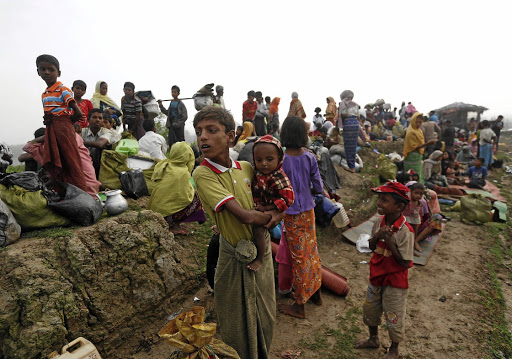 Children wait to be taken to a refugee camp after crossing Naf River at the Bangladesh-Myanmar border in Palong Khali, near Cox’s Bazar, Bangladesh, on November 2 2017. Picture: REUTERS/ADNAN ABIDI

Norwegian mobile operator Telenor Group said in a statement that the transport and communications ministry has ordered mobile internet traffic to be stopped again in five townships in Rakhine and Chin states for three months.

A months-long internet blackout in four Rakhine townships — Maungdaw, Buthidaung, Rathedaung, and Myebon — and one in Chin state had been lifted in September amid peace talks seeking to end clashes between government troops and ethnic insurgents.

Tun Tun Nyi, a Myanmar military spokesperson, said the army was unaware of the shutdown. “We don’t know and we haven’t heard about it,” he told Reuters by phone on Tuesday.

Ministry officials did not respond to calls from Reuters seeking comment.

The order comes amid escalating violence. Two women were killed and seven others wounded last month when a Rohingya village in Rakhine state came under artillery fire.

The Myanmar military has rejected accusations that it was responsible for the shelling, which came two days after the UN’s highest court ordered Myanmar to protect the Rohingya.

More than 730,000 Rohingya Muslims were forced to flee northern Rakhine state in 2017 after a military crackdown that the UN has said was executed with genocidal intent. The army has denied any wrongdoing, describing the crackdown as a legitimate counter-insurgency operation in response to attacks on security forces by Rohingya militants.

More recently, the region was plunged into further chaos by fighting between the military and the Arakan Army, a Rakhine ethnic rebel group which has been fighting for greater autonomy in the state for more than a year. That conflict has displaced tens of thousands and killed dozens.

Lawmakers in the affected areas said the internet blackout has negatively impacted businesses and could prevent aid from reaching villages caught up in the fighting.

“Some villagers have to flee from their villages when the fighting happens,” Khin Saw Wai, a member of the national parliament for Rathedaung, said. “We can help them if we see from Facebook posts that they are in need of food or are in trouble.”

Another lawmaker, Maung Kyaw Zan of Buthidaung township, said the shutdown is “not good for Rakhine” given ongoing clashes.

Aung Marm Oo, the editor-in-chief of a Rakhine-based online media group, said the blackout has disrupted the publication of news on the conflict. “Internet shutdowns negatively impact on journalism ... The internet is essential for us to be able to send video files and pictures for our news stories.”

Myanmar state probe finds ‘no genocide’ against Rohingya
Next Article