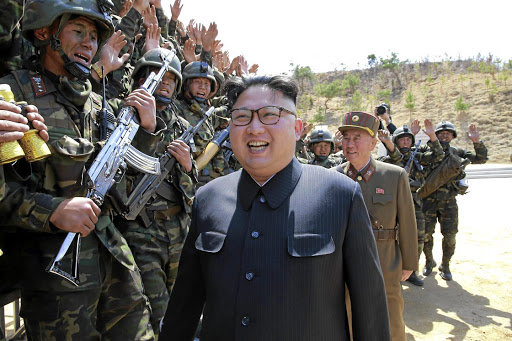 Tokyo — It’s been about two years since Kim Jong-un launched a missile capable of hitting the entire US, declared his nuclear weapons programme “complete” and halted all intercontinental ballistic missile (ICBM) tests.

In that time, the North Korean leader has also become an even bigger threat to America.

Kim’s testing freeze ushered in unprecedented diplomacy with US President Donald Trump, leading to historic meetings in Singapore, Vietnam and the demilitarised zone separating the two Koreas. But at the same time, Kim has been busy churning out fissile material for bombs and developing new missile technology that could make the next big launch of an ICBM even more concerning to Pentagon military planners.

A series of shorter-range missile launches in recent months have improved North Korea’s ability to make solid-fuel ballistic missiles that are easier to move, hide and fire than many of its liquid-fuel versions. This makes it more likely he’s on course towards developing an ICBM that uses solid-propellant technology, potentially giving the US less warning of an imminent strike anywhere from California to New York.

Trump has brushed off North Korea’s missile tests, which Japan and others say violate UN Security Council resolutions, signaling to Kim that he can continue developing his weapons programme as long as he doesn’t fire off another ICBM. But that position may soon cost the US president: Kim is threatening to up the stakes if Trump doesn’t meet a year-end deadline to ease up on sanctions choking his country’s economy.

“Fundamentally, they’ve realised that creating a sense of urgency on the US side is a good negotiating tactic,” said Mintaro Oba, a former US diplomat who worked on Korean Peninsula issues. “They think they can get the most out of Washington right now by heightening pressure and suggesting things could get worse in 2020.”

Co-operation between the US and South Korea is being tested by a Trump demand for the long-time ally to pay about five times more from 2020 to host US troops. Meanwhile, North Korea has delivered blunt statements recently that have referenced Trump’s campaign appearances and point to another ICBM test.

Solid-propellant ballistic missiles — especially the shorter-range versions — can be hidden in warehouses, rolled out on a mobile launcher and fired quickly

“We, without being given anything, gave things the US president can brag about but the US side has not yet taken any corresponding step,” a spokesperson for the state affairs commission headed by Kim said earlier in November. He added that the US will face a “greater threat” if it does nothing.

North Korea froze all missile testing after its November 28 2017 launch of a Hwasong-15 ICBM, which flew about 4,500km into the atmosphere — roughly the distance from New York to Los Angeles. Then in May it resumed the programme with a vengeance, firing off nearly two dozen solid-fuel ballistic missiles since then to make it one of the most active testing years since Kim took power in December 2011.

Solid-propellant ballistic missiles — especially the shorter-range versions — can be hidden in warehouses, rolled out on a mobile launcher and fired quickly. Liquid-propelled missiles, on the other hand, can be easier to spot by spy satellites monitoring vehicles that carry fuel and oxidiser needed for a launch.

“Given what we’ve already seen in the country, if they rolled out a solid-propellant ICBM in the next six months to a year, I wouldn’t be shocked,” said Ankit Panda, an adjunct senior fellow at the Federation of American Scientists, which specialises in North Korea’s weapons systems. “If the North Koreans did go ahead and develop a solid-propellant ICBM, that would complicate allied war planning for preemption.”

The tests included a new, nuclear-capable, hypersonic KN-23 missile that can strike all of South Korea, including US forces stationed south of Seoul, within two minutes of launch, and the southern city of Busan in less than four minutes. It also showed off a range of its solid-fuel rockets in October with a new ballistic Pukguksong-3 missile designed to be fired from a submarine. From land, it could hit almost all of Japan.

“If you launch one or many of these at South Korea, you have between seconds and minutes to decide if this is a conventional attack, a nuclear attack or some other weapon of mass destruction (WMD) payload,” said Melissa Hanham, deputy director of the Open Nuclear Network, a weapons expert specialising in the analysis of satellite imagery.

The risk for the Pentagon, she said, is that North Korea could use these weapons to launch a multi-faceted attack hitting US military assets in Japan and South Korea to impede a response while it also targets the US mainland with ICBMs, which could carry multiple warheads in the payload.

“It’s a strategy that doesn’t put all of its eggs in one basket,” Hanham said.

However, North Korea’s weapons programme still has some major questions. Some of the biggest are whether it has developed a re-entry vehicle to deliver a warhead, as well as its ability to target specific locations such as the White House or Empire State Building. Many weapons experts see North Korea as technologically developed enough to master these challenges.

Kim must also think about Russia and China, two countries in a position to help him with veto power at the UN Security Council, that wouldn’t appreciate another ICBM test. And ultimately it could further hurt Kim’s goal of boosting the economy if he starts raising tensions again.

“The challenge is that North Korea is the geopolitical equivalent of the boy who cried wolf,” said Oba, the former US diplomat. “It has raised tensions so often, in such a restrained, calculated way, that any longtime North Korea observer has to wonder how serious Pyongyang really is when it has also demonstrated a real interest in sanctions relief and diplomacy with the US.”