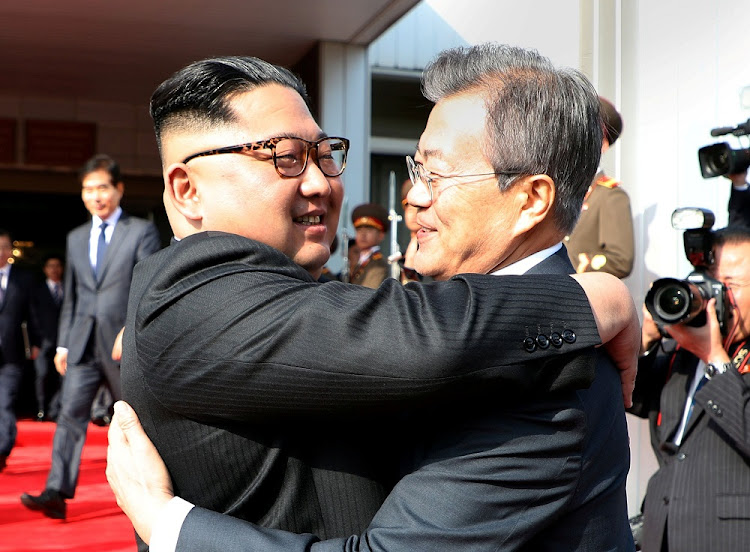 Moon Jae-in, right, and Kim Jong-un share a parting hug after their summit in Panmunjeom truce villiage, just north of the de facto border with South Korea, on May 26 2018. File photo: REUTERS

Seoul — In a meeting that was unthinkable 19 months ago, South Korea’s president will this week introduce the head of the country’s biggest conglomerate to North Korean leader Kim Jong-un in Pyongyang.

The parley caps a remarkable period for Jay Y Lee, vice-chairman of Samsung Electronics, who since the start of 2017 has been arrested, tried and jailed before being released a year later.

Meanwhile, President Moon Jae-in is finding his political fortunes tied to the company and South Korea’s other conglomerates amid a sputtering economy, even though he swept to an election victory promising to rein in the power of the chaebol.

While close links between politicians and chaebol aren’t new in South Korea, Moon talked tough about cutting that influence before his election, a poll that only took place because his predecessor was brought down by a bribery scandal involving Lee. With exports of semiconductors one of the few bright spots in an economy that’s showing signs of strain, the country’s reliance on its most profitable company is deepening and thus reducing regulatory pressure on Samsung.

The president’s office and Samsung have not said what Lee would discuss on the trip. The company does not have any businesses in North Korea, which is subject to international sanctions.

"It is not likely that there will be MOU this time," Yoon Young-chan, a spokesman for Moon, said on Tuesday. "I think there will be further discussions about economic co-operation that we just initiated. There will be no concrete results this time."

Lee’s trip comes less than two months after he appeared at a photo opportunity at Samsung’s latest and biggest chip factory in Pyeongtaek, south of Seoul, where he met with Kim Dong-yeon, South Korea’s finance minister. There, Samsung pushed for lower regulations on pharmaceuticals, construction of plants, mobile networks and other business areas, which the minister planned to look into, Kim told reporters after the meeting.

When Moon was elected in May last year, expectations were high that the government would force the chaebol to improve their corporate governance and reduce the power held by founding families such as the Lees at Samsung.

In a sign of how that dynamic has changed, Moon has called for easing a law that limits companies from owning a bigger chunk of a bank, generating criticism by activists that it could pave the way for chaebol families to use financial units to increase their control.

Samsung has an outsized influence on South Korea. Not only is it the biggest private employer in the country, but its flagship electronics business alone accounts for a staggering 20% of the nation’s benchmark Kospi index, and it has five other affiliates in the top 30.

Lee, son of South Korea’s richest man, was arrested in February 2017 on charges including bribing a friend of former president Park Geun-hye. After a six-month trial, he was sentenced to five years in prison, a term reduced and suspended earlier this year. He is appealing the remaining jail term while prosecutors seek a harsher punishment. The Samsung heir has consistently denied any wrongdoing.

On Tuesday, Lee and other chaebol leaders joined Moon at his third summit with the North Korean leader. It is the second public meeting between Moon and the Samsung boss this year after a brief handshake at the opening of an Indian smartphone factory.

The Samsung boss met with Ri Ryong-nam, a vice-premier of North Korea’s cabinet. Lee pointed out it was his first visit to Pyongyang and expressed optimism for the future.

"Within this opportunity, I hope we can know each other more and build trust relationships," Lee said.

Ri teased the South Korean businessmen, noting that he was quite famous for a number of reasons, prompting laughter in the room.

"I hope you could also become a renowned figure for peace, prosperity, and unification," Ri said.

While Samsung is coming off a year of record profits, South Korea’s economy and Moon’s own approval ratings are struggling. The president’s so-called wage-led growth plan is failing to increase jobs, with the August unemployment rate hitting the highest since early 2010 and consumer confidence tumbling to its lowest in 17 months.

Companies filing for bankruptcy jumped 9.2% to 994 this year through July, the most ever for the period, according to Supreme Court of Korea data going back to 2012.

That is not the only concern for South Korea. As one emerging-market nation after another feels the impact of rising US interest rates and the trade spat between China and the US, the importance of foreign reserves is greater than ever and making exports more important.

That is where Samsung becomes a powerful ally with about 90% of its revenue coming from overseas sales, where it leads the world in smartphones and TVs. The Suwon-based company is also the world’s biggest maker of semiconductors and, along with local rival SK Hynix, a member of another chaebol, it dominates supply of critical memory chips.

Semiconductors accounted for 23% of South Korea’s exports last month, more than any other product. That forces Moon and Samsung into a delicate situation. Too much reliance on the chaebol could further harm his political stock, but it also means any downturn in chip demand spells trouble for the company and Asia’s fourth-largest economy. "Its pricing has been very good and margins for Samsung have been really strong," said Erik Zipf, head of emerging market equities at DuPont Capital Management "We don’t think that’s sustainable. We think as capacity comes on, that’ll kind of reduce margins."

Still, Samsung continues to play along. Two days after the meeting with the finance minister, Samsung announced a three-year plan that includes 180 trillion won ($160bn) of investment, with the promise to hire 40,000 more people. That is a shot in the arm for a president under pressure and a company under scrutiny.

"Reforms are dying on the vine," said Kwon Young-june, a professor who researches corporate governance at Seoul’s Kyung Hee University. "The government will find itself more and more in need of conglomerates as long as it is fixated on quick results rather than long-term reforms."

This is what Apple is doing to its devices in 2018

This is what Apple is doing to its devices in 2018