Despite still ‘disagreeing’ with the outcome of the election, Trump made the statement as staff resign and Republican objections fizzle out 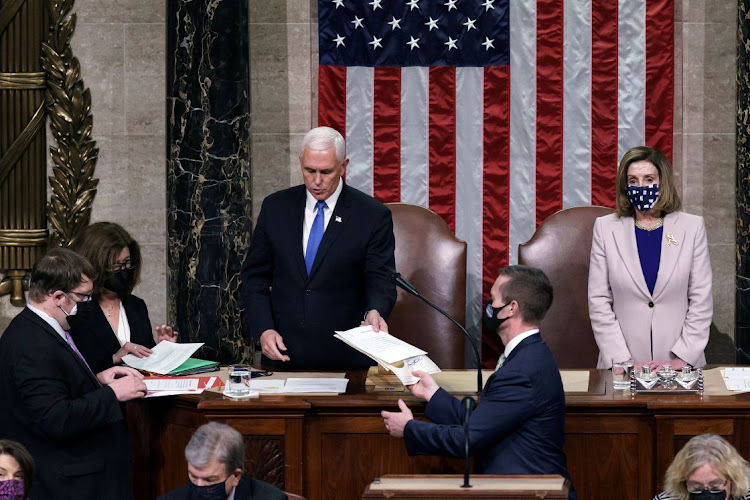 US vice-president Mike Pence at the Capitol in Washington, US, January 7 2021. Picture: POOL VIA REUTERS/J SCOTT APPLEWHITE

“Even though I totally disagree with the outcome of the election, and the facts bear me out, nevertheless there will be an orderly transition on January 20,” Trump said in a statement posted on Twitter by his aide Dan Scavino early Thursday morning.

Trump’s statement came as staff resign and as congressional allies have abandoned him in the aftermath of a mob of his supporters laying siege to the Capitol on Wednesday.

Trump had repeated his pledge that he would never concede at a rally earlier on Wednesday.

Trump had pressured lawmakers to object to the results in what is normally a routine process, and urged vice-president Mike Pence to take the extraordinary step of rejecting states outright. Instead, Pence presided over the counting of electoral votes, which resumed after order was restored to the Capitol and ended early on Thursday.

A group of Republicans had prepared objections, perhaps to half a dozen states, but the movement largely fizzled.

In the Scavino tweets, Trump added, “I have always said we would continue our fight to ensure that only legal votes were counted. While this represents the end of the greatest first term in presidential history, it’s only the beginning of our fight to Make America Great Again!”

Yes, he was surrounded by enablers from his children to many Republicans, but the entire affair was Trump’s show from the beginning
Opinion
8 months ago

Congress gets back to work after assault on the Capitol