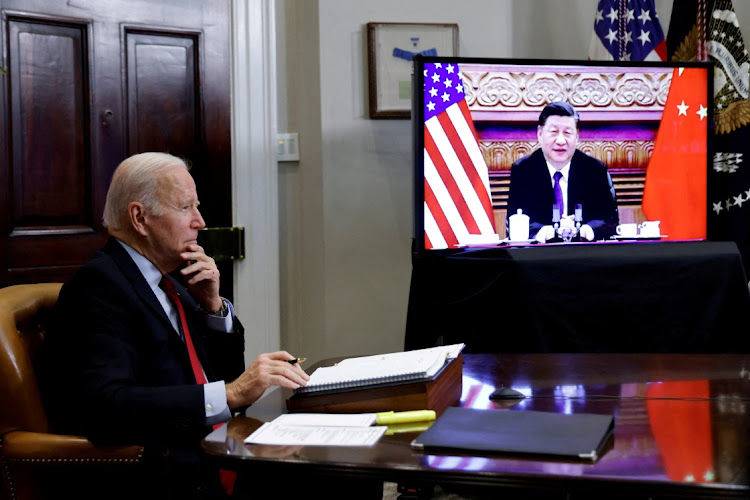 US President Joe Biden speaks virtually with Chinese leader Xi Jinping from the White House in Washington, the US. Picture: REUTERS/JONATHAN ERNST

Washington —  US President Joe Biden and China’s leader Xi Jinping held a fifth call as leaders on Thursday, speaking for more than two hours, as concerns mounted over a possible visit to Chinese-claimed Taiwan by US House of Representatives speaker Nancy Pelosi.

US officials had the call would have a broad agenda, including discussion of Russia’s invasion of Ukraine, which China has yet to condemn.

At its core, US officials see the exchange as another chance to manage competition between the world’s two largest economies, whose ties have been increasingly clouded by tensions over democratically governed Taiwan, which Xi has vowed to reunite with the mainland, by force if necessary.

Beijing has issued escalating warnings about repercussions should Pelosi visit Taiwan, a move that would be a dramatic, though not unprecedented, show of US support for the island, which says it is facing increasing Chinese military and economic threats.

Washington does not have official relations with Taiwan and follows a “one-China” policy that recognises Beijing, not Taipei, diplomatically. But it is obliged by US law to provide the island with the means to defend itself, and pressure has been mounting in Congress for more explicit support.

“This is about keeping the lines of communication open with the president of China, one of the most consequential bilateral relationships that we have, not just in that region, but around the world, because it touches so much,” White House national security spokesperson John Kirby told reporters on Wednesday.

One person briefed on planning for the call said the Biden administration thinks leader-to-leader engagement is the best way to lower tensions over Taiwan.

Some analysts believe Xi also has an interest in avoiding escalation as he seeks an unprecedented third term in office at a congress of China’s ruling Communist Party expected in the fall.

Biden also wanted to discuss climate and economic competition issues, the person briefed said, as well as the idea of placing a price cap on Russian oil to punish Moscow for its war in Ukraine, an issue treasury secretary Janet Yellen raised with Chinese counterparts earlier in July.

The Biden administration has been debating whether to lift some tariffs on Chinese goods as a way to ease soaring inflation, but US officials have said a decision was not expected ahead of the call.

When Biden last spoke to Xi in March, he warned of “consequences” if Beijing gave material support for Russia’s war, and the US government believes that that red line has not been crossed in the months since.

Taiwan has complained of stepped-up Chinese military manoeuvres over the past two years to try to force it to accept Beijing’s sovereignty. Just ahead of Thursday’s call, Taiwan’s military said it fired flares to warn away a drone that “glanced by” a strategically located and heavily fortified island close to the Chinese coast that was possibly probing its defences.

The relationship is in such a toxic state. Mutual distrust is really at an all-time high. I think people don’t realise how dangerous this particular moment is

Bonnie Glaser at German Marshall Fund of the US

The White House has reiterated that its “one-China” policy has not changed despite speculation over a possible trip by Pelosi, which the speaker has yet to confirm.

The last time a speaker of the US House visited Taiwan was in 1997, and as a coequal branch of government, the US executive has little control over congressional travel.

China has grown more powerful militarily and economically since, and some analysts worry such a visit at a time of fraught ties, could spur a crisis across the 160km wide Taiwan Strait waterway separating China and Taiwan.

“The relationship is in such a toxic state. Mutual distrust is really at an all-time high. I think people don’t realise how dangerous this particular moment is,” said Bonnie Glaser, a China expert at the German Marshall Fund of the US.

She said Biden and Xi needed to focus their call on de-escalation, including possible mechanisms to reduce the risk of mishaps.

Kirby said the administration has been in touch with Pelosi's office to make sure she has “all the context” she needs to make decisions about her travel.

China has given few clues to specific responses it might take if Pelosi, a long time critic of China, particularly on human rights issues, does go to Taiwan.

Martin Chorzempa, a senior research fellow at the Peterson Institute for International Economics, said playing up the Taiwan issue could serve Xi as a domestic distraction from China’s slowing economy, but “any reaction strong enough to trigger US sanctions would create massive damage to China and the world economy”.

China’s state media said on Thursday the country will try hard to achieve the best possible results for the economy this year, dropping previous calls that it will strive to meet its 2022 growth target. This followed a high-level Communist Party meeting chaired by Xi.

Scott Kennedy of Washington’s Center for Strategic and International Studies think-tank, said he did not believe the two sides were on the edge of a crisis, but “the risk of a major crisis is well above zero” and a Biden-Xi call was important to avoid an unwanted clash.

“Beijing, Taipei and Washington are full of people steeped in how to send and interpret signals conveying threats and reassurance, and I’m sure no-one wants a war right now.”

A mortgage revolt by homebuyers in July has put more pressure on authorities to act, FT reports
World
3 weeks ago

The report in Science magazines shows the earliest cases were linked to bats, foxes and other live animals infected with the virus and sold in the ...
World
3 weeks ago