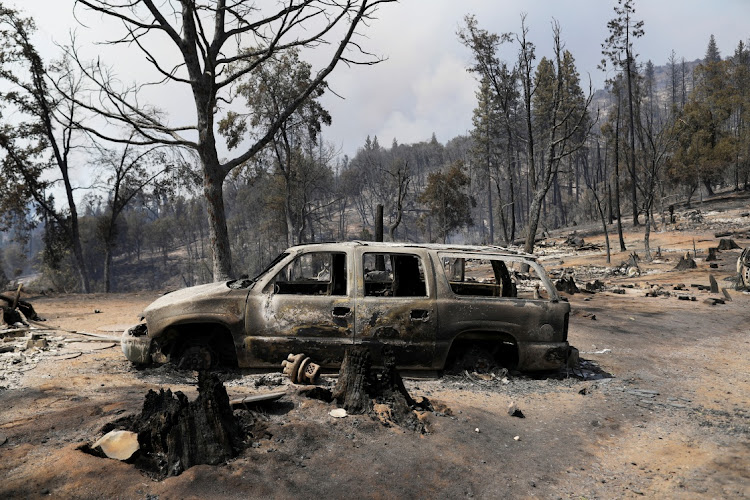 A car is seen burnt as the Oak Fire burns near Jerseydale in Mariposa County, California, the US, on July 25 2022. Picture: REUTERS/DAVID SWANSON

Mariposa — Wildfire refugee Rod McGuire sat alone at the far end of the evacuation centre, trying not to cry.

One of thousands to flee California’s Oak Fire near Yosemite National Park, McGuire, a 57-year-old auto mechanic, escaped from the Sierra Nevada foothills with his life but lost his house, consumed by the largest wildfire to burn in the state this year.

“If I had stayed five minutes longer, I would not have made it,” said McGuire, who rescued his small black dog, Dobie, but failed to corral his cats, Tigger and Paws.

His story illustrates the human toll that wildfires claim with evermore ferocity each year, fuelled by years of on-and-off drought that have sapped the forest and underbrush of humidity, and where summertime temperatures routinely approach 38°C.

The Oak Fire has consumed at least 17,241 acres since it started on Friday, an area more than half the size of San Francisco. By Monday evening, it was 16% contained, according to the California department of forestry and fire protection (Cal Fire).

The fire was moving northward into the Sierra National Forest, no longer in the direction of Yosemite, some 16km to the east. A grove of Yosemite’s giant, ancient sequoia trees appeared safe, though it had been threatened by a wildfire weeks ago.

With climate change contributing to the drought and heat, 15 of the 20 most-destructive fires in California history have struck since 2015, when measured by deaths and structures burnt, according to Cal Fire. More than 6.8-million acres burnt in 2020 and 2021 alone, an area about the size of Haiti.

In Mariposa (population 1,400), about 240km inland from San Francisco, about 40 of those fleeing the flames have taken refuge in a Red Cross evacuation centre at Mariposa Elementary School.

McGuire said he was at work at a mechanic shop on Friday when he saw flames and a plume of smoke shortly before 4pm that seemed to be coming from his neighbourhood.

He dashed home as the flames grew closer.

The one-story dream house that he bought 22 years ago had greenhouses out back, and on a clear day the view stretched all the way to Fresno, a city about 80km to the south. He moved in on April Fool’s Day in 2000.

With the fire bearing down, McGuire said he swept up important papers and his grandmother’s crocheted image of the Last Supper. On the way down the hill into town he heard nine explosions — seven small ones and two big ones — that he believes were propane tanks.

With climate change contributing to the drought and heat, 15 of the 20 most-destructive fires in California history have struck since 2015.

The California department of forestry and fire protection

Anthony is in a broken black wheelchair and wears bandages from amputations on each leg.

McGuire, a military veteran who worked for years at Yosemite before joining an auto shop in Mariposa, will be reimbursed for the cost of rebuilding his house by his insurance.

But that was little comfort as he recounted the horrifying events, twice succumbing to tears during an interview with Reuters.

He learnt his house burnt from a television crew that showed him pictures. Sitting in the ashes was a sign reading “McGuire’s House”.

Beyond concerns about safety, an inability to retain and recruit firefighters is causing challenges for the fire-fighting programme
World
3 months ago

More than 100 wildfires are raging across the west of the country and Canada, while smoke from bushfires in Europe has reached the North Pole for the ...
World
11 months ago
Next Article

US power companies could battle to keep the lights on amid summer supply ...

US power companies could battle to keep the lights on amid summer supply ...