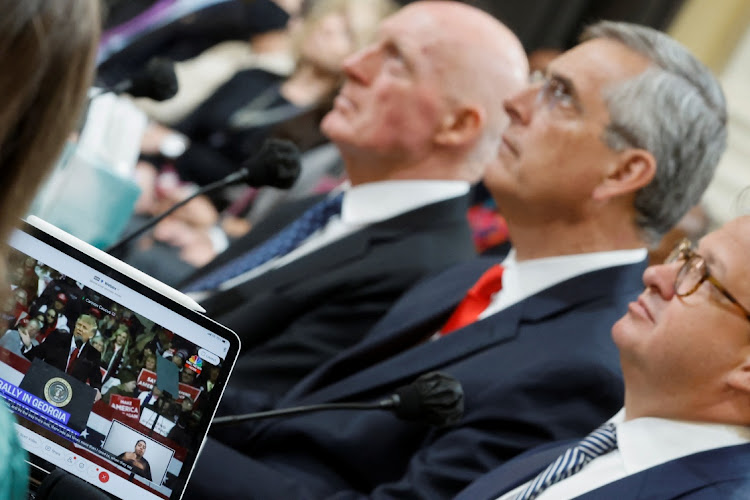 Washington — State election officials recounted on Tuesday how Donald Trump supporters threatened them and their families after they refused to help the former president overturn his 2020 election defeat.

The congressional committee investigating the deadly January 6, 2021, assault on the US Capitol by Trump supporters shifted its focus on Tuesday to the Republicans pressuring of state officials as he sought to remain in the White House despite losing.

It was the fourth of at least six public hearings the nine-member select committee is holding in June on its nearly year-long investigation of the attack on the Capitol by thousands of Trump supporters as former vice-president Mike Pence met members of Congress to formally certify Trump’s defeat by Democrat Joe Biden.

He said the harassment has continued, with demonstrations at his house, confrontations with neighbours and other threats and insults that continued even when his daughter was gravely ill.

Bowers described conversations with Trump and his close aides including his then personal lawyer, Rudy Giuliani, and adviser John Eastman, who urged Bowers to reject the election results.

“You’re asking me to do something against my oath and I will not break my oath,” Bowers said, recounting a conversation with Giuliani.

At a raucous rally on January 6, Trump urged supporters to march on the Capitol. He had seized on that date — when Pence was to certify the election — as a last-ditch chance to hold onto the White House despite his loss at the polls.

“What happened to Mike Pence wasn’t an isolated part of Donald Trump's scheme to overturn the election. In fact, pressuring public servants into betraying their oath was a fundamental part of the playbook,” said Democratic Representative Bennie Thompson, chair of the committee.

Thompson was referring to a hearing last week that focused on pressure Trump and his associates put on Pence to oppose formal certification of the November 2020 presidential election result.

The committee also played audio and video recordings in which close Trump associates — and the president himself — urged state officials to reject the election results.

The committee was also to hear from Wandrea ArShaye Moss, a former Georgia state election worker who filed a lawsuit over threats she said she faced after her state backed Biden, who won the presidential election.

“I have been threatened and harassed,” Moss said in prepared remarks released ahead of her testimony. “They went after my child — my child. He heard horrible things about his mom, just because I did my job.”

The committee’s seven Democrats and two Republicans have used the hearings to build their case that Trump’s efforts to overturn his defeat amounted to illegal conduct, far beyond normal politics.

Biden in November 2020 defeated Trump in both Georgia and Arizona, flipping two states that had previously backed Republicans in presidential elections.

Trump called Raffensperger on January 2 2021, telling Georgia’s top election official in a recorded conversation to “find” enough votes for him to win Georgia. Raffensperger has remained a frequent target of Trump’s criticism.

The secretary of state nonetheless last month held off a Trump-backed challenger, Republican House member Jody Hice, to win the Republican Party’s primary as he ran for re-election.

Trump has denied wrongdoing, while repeating false accusations that he lost only because of widespread fraud that benefited Biden. Trump and his supporters — including many Republican members of Congress — dismiss the January 6 panel as a political witch-hunt, but the panel’s backers say it is a necessary probe into a violent threat against democracy.

In his testimony, Bowers said he had received a call from Andy Biggs, a Republican House member from Arizona, asking if he would back the effort to question Arizona’s election result.

Biggs’s office did not immediately respond to a request for comment.