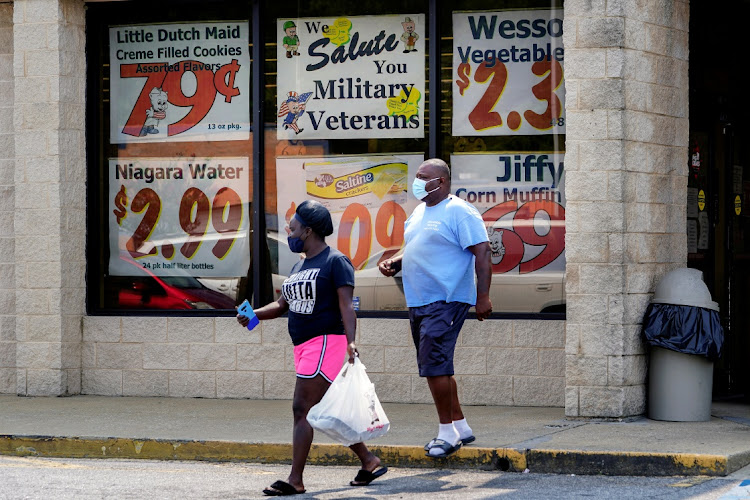 Shoppers in Columbus, Georgia, US, in September 2020. Picture: REUTERS/ELIJAH NOUVELAGE

Washington — Applying for jobs, picking up gig work as a delivery driver, looking after her six children: life is an endless juggling act for single mom Sheila as she struggles to make ends meet and provide for her family in Atlanta, Georgia.

“It’s tiring, because I’m [trying] to find steady income,” said Sheila, 33, whose name has been changed to protect her privacy.

But this week, she will start receiving regular cash payments totalling $20,400 over two years under a guaranteed income programme supporting hundreds of lower-income black women in the state.

Sheila is one of about 650 black women set to get cash transfers with no conditions on how the money is spent under a programme organised by GiveDirectly and the Georgia Resilience and Opportunity (GRO) Fund, two nonprofit groups.

Interest in universal basic income and other guaranteed income programmes is growing across the US and beyond, with dozens of schemes and pilots taking place nationwide.

Organisers say it is the largest ever guaranteed income initiative in the US south, aiming to help black women who suffer entrenched economic inequality as a result of systemic gender and racial barriers to wealth.

In the US, black women make roughly 61c for every dollar paid to white, non-Hispanic men — translating to a loss of more than $23,000 a year, according to a 2019 analysis by the National Women’s Law Center.

Black women in Georgia are roughly twice as likely as white women to be living in poverty, according to the Georgia Budget and Policy Institute, a nonprofit, and nationally they are less likely to have bounced back from Covid-19 job losses.

“We just have it hard,” said Taneisha, a 32-year-old who was also accepted into the Georgia programme, as she described the challenges facing black women. “We’re always looked at to be superwoman but we can’t get the superwoman level of pay, respect, and other things.”

“Philosophically, it’s easier to get the programme [enacted] if work is a requirement,” said Doug Holtz-Eakin, president of the American Action Forum, a centre-right think-tank.

Holtz-Eakin also raised concerns that publicly run programmes could distort local economies with higher taxes to pay for them, and in turn incentivise higher earners to move out of the area.

An increasing number of countries and US cities have in recent years experimented with universal basic income schemes, or other guaranteed income initiatives which typically target a specific demographic group.

There have also been recent programmes in the US targeting women of colour and black mothers — though not at the scale of the new initiative out of Georgia, which is privately funded.

Participants must earn an annual income of no more than two times the federal poverty level, which varies by household size but for a family of four works out at $55,500.

Half will get 24 monthly instalments of $850, and the other half a lump sum of $4,300, followed by 23 months of $700 payments, as organisers experiment to find the most effective way to deliver the money.

Taneisha plans to pay off debt and potentially find a better apartment for herself and her two children.

Sheila also hopes to move into a bigger apartment, and aims to get a hair product business off the ground, which could offer her steadier work and income. “I have four daughters, so of course I have to be an example for them,” she said.

GiveDirectly is working with Appalachian State University to research the effects of the scheme, with the aim of providing data to steer future antipoverty initiatives.

One goal is to assess the impact of guaranteed income on “racialised economic inequality”, said Miriam Laker-Oketta, research director at GiveDirectly, who will be following up with women to learn about their experiences.

“We want to hear the effects on their health, on their income, on their assets, family relationships, wellbeing and resilience,” she said.

Meanwhile, organisers say they can already see the impact on the women taking part. “They leave happy — either crying or smiling or jumping,” said Shonda Godfrey, an enrolment officer, as she described the reaction of participants.

“You can have the relaxation of ‘I can feed my kids this month’.”