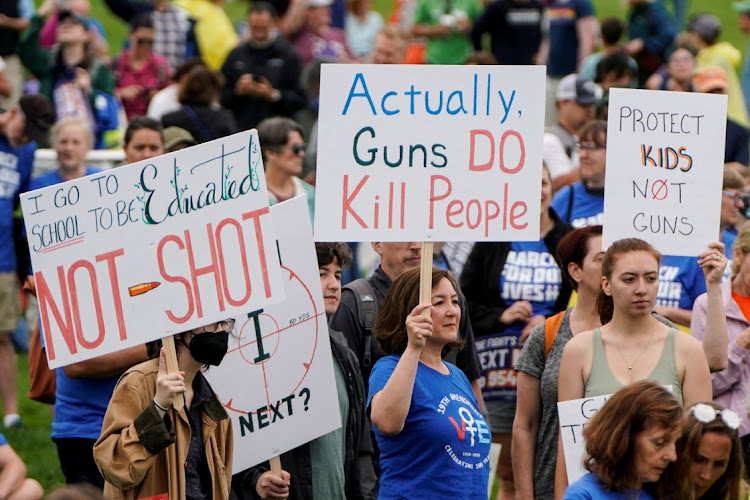 Demonstrators hold placards as they take part in one of a series of nationwide protests against gun violence, in Washington, DC, the US, June 11 2022. Picture: JOSHUA ROBERTS/REUTERS

Washington  — A bipartisan group of US senators, including enough Republicans to overcome the chamber’s “filibuster” rule, on Sunday announced an agreement on a framework for potential gun safety legislation.

The bill included support for state “red flag” laws, tougher background checks for firearms buyers under 21 and a crackdown on a practice called “straw purchases”, but not other limits Democrats and President Joe Biden had advocated such as raising the age for buying semi-automatic rifles to 21 or new limits on assault-style rifles.

Ten Republicans signalled their support for the preliminary deal, indicating the measure potentially could advance to a vote on passage and overcome roadblocks by other Republicans who oppose most gun control measures.

The talks that led to the framework followed a series of high-profile mass shootings in the US, including one at a school in Uvalde, Texas, in May that killed 19 young children and two staff and one also in May in a Buffalo, New York, supermarket that killed 10 black victims.

Senate majority leader Chuck Schumer, a Democrat, issued a statement calling the plan “a good first step” and one that would “limit the ability of potential mass shooters to quickly obtain assault rifles by establishing an enhanced background check process for gun purchasers under age 21”.

Schumer said that he wanted to move a bill quickly to a Senate vote once legislative details are worked out.

The US has the highest rate of firearms deaths among the world’s wealthy nations. But it is a country where many cherish gun rights and its constitution’s second amendment protects the right to “keep and bear arms”.

“Our plan saves lives while also protecting the constitutional rights of law-abiding Americans,” the group, led by Democrat Chris Murphy and Republican John Cornyn, said in a statement. “We look forward to earning broad, bipartisan support and passing our commonsense proposal into law.”

The agreement was announced a day after tens of thousands in Washington and at hundreds of other places across the US rallied to demand that legislators pass legislation aimed at curbing gun violence.

Biden, a Democrat, on June 2 called for banning the sale of assault weapons and high-capacity magazines, or, if that were not possible, raising the minimum age to buy those weapons to 21 from 18. Biden also pressed for repealing the liability shield that protects gun manufacturers from being sued for violence perpetrated by people carrying their guns.

Republican opposition has been critical in thwarting Democratic-backed gun control proposals in Congress for decades.

The Senate is split, with 50 Democrats and 50 Republicans, and legislation must have 60 votes to overcome a manoeuvre known as the filibuster.

Multiple shooters opened fire on revellers in the latest incidents of gun violence after recent attacks in Texas, New York and Oklahoma
World
3 weeks ago

It's the third presidential trip to a mass shooting site, including earlier in May when he visited Buffalo where a gunman killed 10 black people
World
1 month ago
Next Article