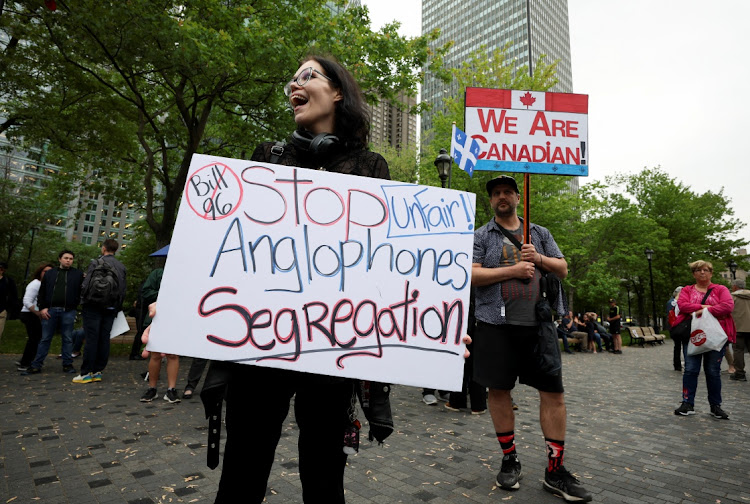 Montreal/Ottawa — Backers of Quebec’s sweeping new law to promote French usage in the Canadian province hail it as the most important measure in nearly half a century to protect the language in mostly English-speaking North America.

But the law passed by a majority of Quebec legislators on Tuesday faces vocal opposition from minority English-speakers, businesses, health-sector advocates, and indigenous peoples just as the province heads to the polls in October.

Language remains a sensitive issue in mostly French-speaking Quebec, where unhappiness over the dominance of English fuelled the rise of the separatist Parti Quebecois in the 1970s.

In 1977, passage of Bill 101 made French Quebec’s everyday business language, and obligated children of immigrants to attend elementary and high school in French, leading to the departure of many English speakers.

Bill 96 opens the door to lawsuits against stores that fail to serve customers in French, one expert says. Previously, Quebecers refused service in French complained to the province’s language watchdog.

Alexandre Fallon, a partner at Osler, Hoskin & Harcourt, said the law would also apply to e-commerce sites run by businesses outside Quebec, and the increased liability risk has some companies considering stopping service for Quebecers.

“Many businesses looking at this say well, OK, I’m going to stop serving Quebec clients because I cannot serve them 100% in French, so I’m not going to take the risk of being sued,” Fallon said.

Employers must now make a reasonable effort to avoid making other languages besides French a job requirement. This could make it harder for hospitals, for example, to offer services to patients in another language.

Contracts would need to be provided to consumers in French even if the parties wanted it in English, raising translation costs. Court proceedings would now have to be in French for businesses, Fallon said.

Immigrants would not be able to access most government services in a language other than French six months after their arrival. The Quebec government has said healthcare would be exempt from the new law.

Liberal Prime Minister Justin Trudeau said this week he had “concerns” about Bill 96, as the federal government is responsible for protecting the rights of linguistic minorities.

CAQ leader and Quebec Premier Francois Legault has said he is willing to invoke the so-called notwithstanding clause, which allows a provincial government to override certain aspects of Canada’s Charter of Rights in five-year intervals.

Justice minister David Lametti this week did not rule out challenging the law in court.

Justin Trudeau’s officials have shunned any push to speed up the phasing out of fossil fuels, in favour of a slower path
News
2 months ago
Next Article