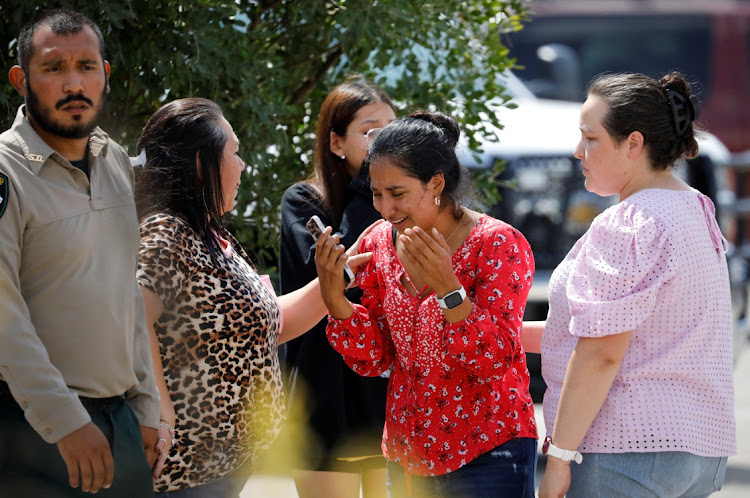 A woman reacts outside a civic centre, where students had been transported from Robb Elementary School after a shooting, in Uvalde, Texas, the US, May 24 2022. Picture: MARCO BELLO/REUTERS

A gunman opened fire at an elementary school in South Texas on Tuesday, killing 14 students and one teacher, before the suspect himself died, governor Greg Abbott told reporters.

Abbott said the gunman, identified as 18-year-old Salvador Ramos, apparently was killed by police officers responding to the scene, and that two of those officers were struck by gunfire, though the governor said their injuries were not serious.

Official details on the circumstances of the midday shooting remained sketchy in the immediate aftermath of the violence, which unfolded at Robb Elementary School in the town of Uvalde, Texas, about 160km west of San Antonio.

“He shot and killed horrifically, incomprehensibly, 14 students and killed a teacher. Mr Ramos, the shooter, he himself is deceased and its believed that responding officers killed him,” Abbott told a news briefing.

According to CNN, the gunman drove up to the school and entered with a rifle and a handgun.

The student body at the school consists of children in the second, third and fourth grades, according to Pete Arredondo, chief of the Uvalde consolidated independent school district police department, who also addressed reporters.

University Hospital in San Antonio said on Twitter it had received two patients from the shooting in Uvalde, one child and one adult. Both patients, a 66-year-old woman and a 10-year-old girl, were listed in critical condition.

The Texas rampage was the latest in a series of mass shootings in US schools that have shocked the world and fuelled a fierce debate between advocates of tighter gun controls and those who oppose any legislation that could compromise the right of Americans to bear arms.

The shooting in Texas was one of the deadliest at a US school since a gunman killed 26 people, including 20 children from five- to 10-years old, in a rampage at Sandy Hook Elementary School in Connecticut in December 2012.

In addition to the six dead, another 12 people were wounded in California’s state capital
World
2 months ago
Next Article