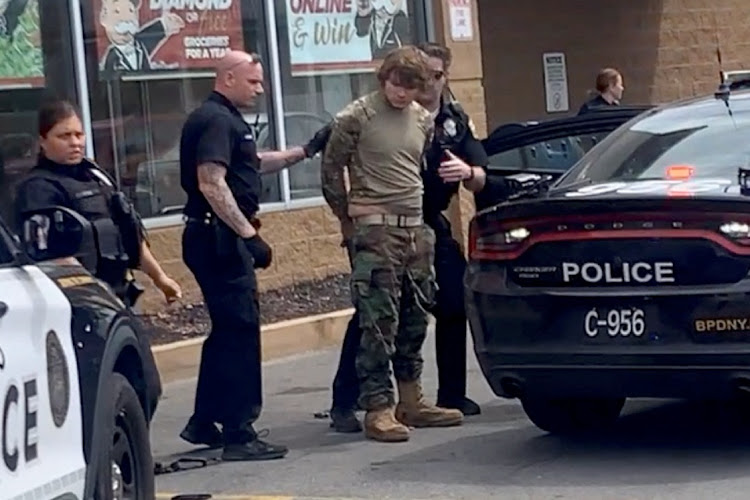 A man is detained following a mass shooting in the parking lot of Tops supermarket, in a still image from a social media video in Buffalo, New York, the US, May 14 2022. Picture: BIGDAWG/REUTERS

Buffalo — An 18-year-old white gunman shot 10 people dead and wounded three on Saturday at a supermarket in a black neighbourhood of upstate New York, before surrendering after what authorities called an act of “racially motivated violent extremism”.

Authorities said the suspect, who was armed with an assault-style rifle and appeared to have acted alone, drove to Buffalo from his home several hours away to launch the afternoon attack that he broadcast in real time on social media platform Twitch, a live video service owned by Amazon.

Eleven of the 13 people struck by gunfire were black, officials said. The two others were white. The racial breakdown of the dead was not made clear.

Court papers named the suspect as Payton Gendron of Conklin, a town of about 5,000 people in New York’s Southern Tier region near the Pennsylvania border.

He appeared in a state court hours after the shooting on first-degree murder charges, which carry a maximum penalty of life in prison without parole, said Erie County district attorney John Flynn. New York has no capital punishment.

Flynn said the judge also ordered Gendron to remain in custody without bail and to undergo a “forensic examination”. Gendron was scheduled to return to court on May 19.

Authorities said the teenager, reported by local media to have been a student at the State University of New York’s Broome Community College near Binghamton, had come close to taking his own life before he was arrested. 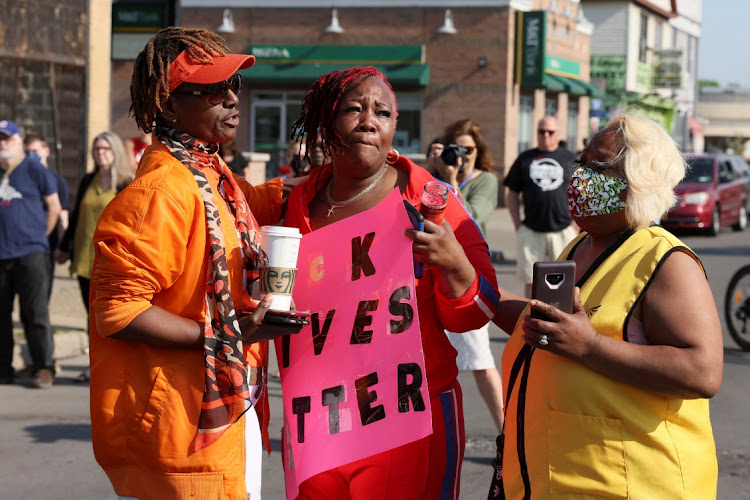 A mourner holds a sign during a vigil for victims of the shooting at a Tops supermarket in Buffalo, New York, the US, May 15 2022. Picture: BRENDAN MCDERMID/ REUTERS

When confronted by officers at the store, the suspect held a gun to his own neck, but they talked him into dropping the weapon and surrendering, Buffalo police commissioner Joseph Gramaglia told a news briefing.

Gramaglia said the gunman shot and killed three people in the parking lot of the Tops Friendly Markets outlet before exchanging fire with a retired police officer working as a security guard for the store, but the suspect was protected by his body armour.

The guard was one of the 10 people shot dead, the nine others all being customers. Three other employees of the store, part of a regional chain, were wounded but are expected to survive, authorities said.

Shonnell Harris, a manager at Tops, told the Buffalo News she thought she heard as many as 70 gunshots and that she fell several times as she ran through the store to a rear exit.

“He looked like he was in the army,” she told the newspaper, describing the camouflage-clad assailant.

Retired firefighter Katherine Crofton, who lives nearby, said she witnessed the start of the bloodshed from her porch.

“I saw him shoot this woman,” Crofton told the paper. “She was just going into the store. And then he shot another woman. She was putting groceries into her car. I got down because I did not know if he was going to shoot me.”

Stephen Belongia, the FBI special agent in charge of the bureau’s Buffalo field office, said the attack will be investigated as a hate crime and as an act of “racially motivated violent extremism” under federal law.

“This person was pure evil,” Erie County sheriff John Garcia said at a news conference, his voice quaking with emotion. “It was a straight-up racially motivated hate crime from somebody outside our community.”

US President Biden decried the shooting as “abhorrent to the very fabric of this nation” in a statement issued late on Saturday. “Hate must have no safe harbour. We must do everything in our power to end hate-fuelled domestic terrorism.”

New York governor Kathy Hochul told a late-evening news conference she is dismayed that the killer managed to live-stream his attack on social media, which she blamed for hosting a “feeding frenzy” of violent extremist ideology.

“The fact that that can even be posted on a platform is absolutely shocking,” Hochul said. “These outlets must be more vigilant in monitoring social media content.”

Twitch said in a statement it removed the live stream less than two minutes after it started and is working to ensure no other accounts repost the content. Hochul said it should have been taken down “within a second”.

Screenshots of the broadcast were posted on social media, including some that appeared to show the shooter holding a gun and standing over a body in the grocery store.

A document circulating online that appeared to have been written by the killer sketched out a to-do list for the attack, including cleaning the gun and testing the live stream.

In addition, a 180-page manifesto outlining “The Great Replacement Theory” — the idea that white people are being replaced by minorities in the US  and other countries — also circulated online, reportedly authored by Gendron.

A spokesperson for Flynn’s office declined to comment on the documents. The FBI could not immediately be reached for comment.

The governor also said she will introduce a previously planned “comprehensive” gun control package on Tuesday to “address further loopholes that exist in our [state] laws”.

Hochul said the firearm used in the killings was legally purchased but was illegally modified with a high-capacity magazine, which she said could easily have been purchased legally in Pennsylvania.

The Buffalo shooting follows a pattern of other racially motivated mass murders in recent years, including a Pittsburgh synagogue attack that left 11 congregants dead in October 2018, and the Atlanta spa shootings in March 2021 in which a white man killed eight people, targeting Asians.

Saturday’s shooting spree is also reminiscent of the attack on a mosque in Christchurch, New Zealand, in 2019, when the killer live-streamed the murders on Facebook.

Buffalo mayor Bryon Brown called for unity on what he called a “day of great pain for our community”.

“Many of us have been in and out of this supermarket many times,” he told reporters. “We cannot let this hateful person divide our community or our country.”

Alleged attacker, who was an employee of San Jose’s transit service, died at the scene
World
1 year ago

Police were responding to traffic congestion reports when shots were heard, a spokesperson says
World
1 year ago

This is unlikely to change as small, rural states where gun ownership is widespread have disproportionate influence in the US Senate
World
1 year ago
Next Article