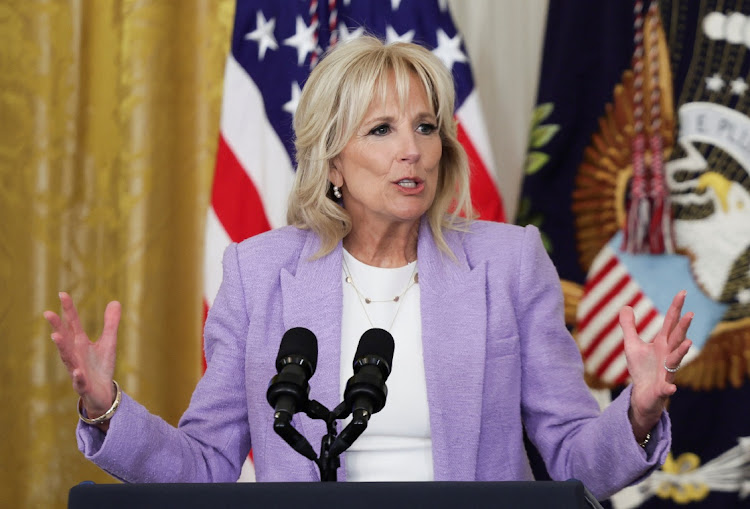 US first lady Jill Biden delivers remarks at an event in the East Room at the White House, in Washington, DC, the US, April 27 2022. Picture: EVELYN HOCKSTEIN/REUTERS

US first lady Jill Biden will visit Romania and Slovakia from May 5 to 9 to meet US service members and embassy personnel, displaced Ukrainian parents and children, humanitarian aid workers and teachers, her office said on Monday.

On Sunday, celebrated as Mother’s Day in the US, Biden will meet Ukrainian mothers and children who have been forced to flee their homes because of Russia’s war against Ukraine, her office said.

The wife of President Joe Biden will meet US military service members at Mihail Kogalniceau Airbase in Romania on May 6, before going to Bucharest to meet Romanian government officials, US embassy staff, humanitarian aid workers and teachers working with displaced Ukrainian children.

The trip also includes stops in the Slovakian cities of Bratislava, Kosice and Vysne Nemecke, where Biden will meet  government officials, refugees and aid workers, her office said.

Biden’s visit is the latest show of support for Ukraine and neighbouring countries that are helping Ukrainian refugees by top US representatives.

US House of Representatives speaker Nancy Pelosi met Ukrainian President Volodymyr Zelensky on Sunday during an unannounced visit to Kyiv.

Jill Biden has also been engaged closely. In March she and her Polish counterpart, Agata Kornhauser-Duda, worked together to speed medical assistance to the front lines of the refugee crisis sparked by Russia’s invasion.

Russia calls its actions in Ukraine a “special military operation”.

The UN refugee agency said last week that nearly 5.5-million people had fled Ukraine since the start of the war on February 24, and the number could grow to 8.3-million in 2022.

By April 27, more than 3-million Ukrainians had fled to Poland, with Romania taking in about 817,300 and Slovakia absorbing nearly 372,000, according to UN data.

Meanwhile, the US embassy hopes to return to Kyiv by the end of May if conditions permit, its charge d’affaires said on Monday.

US diplomats left the Kyiv embassy nearly two weeks before Russia launched its invasion of Ukraine on February 24, moving some functions to the western city of Lviv before relocating to neighbouring Poland.

“We listen to the security professionals, and when they tell us we can go back we will go back,” the charge d’affaires, Kristina Kvien, told reporters.

Some Western countries have already moved their embassies back to Kyiv as the main focus of fighting in Ukraine has moved away from the capital to the east and south of the country.

After failing to capture the capital in a nine-week assault, Russia is now preparing for new offensives in the east
World
2 weeks ago

Ukraine refers to attacks on health facilities, disrupted vaccination campaigns and concerns about the risk of radiological and chemical events
World
2 weeks ago
Next Article