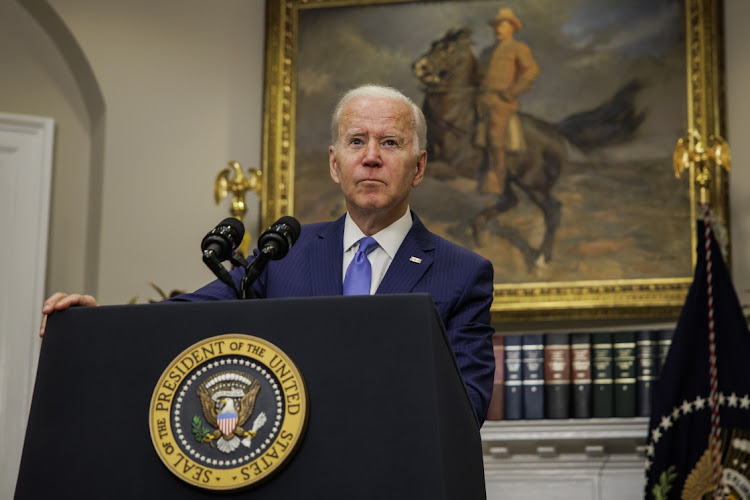 US President Joe Biden speaks in the Roosevelt Room of the White House in Washington, DC, the US, April 28 2022. Picture: SAMUEL CORUM/BLOOMBERG

Washington  — US President Joe Biden asked Congress for $33bn to support Ukraine — a dramatic escalation of US funding for the war with Russia — and for new tools to siphon assets from Russian oligarchs.

The funding request includes more than $20bn for weapons, ammunition and other military assistance, as well as $8.5bn in direct economic assistance to the government and $3bn in humanitarian aid. It is intended to cover the war effort’s needs through to end-September, the end of the fiscal year.

“We need this bill to support Ukraine in its fight for freedom,” Biden said at the White House after signing the request on Thursday. “The cost of this fight — it’s not cheap — but caving to aggression is going to be more costly.”

The US has ruled out sending its own or Nato forces to Ukraine, but Washington and its European allies have supplied weapons to Ukraine such as drones, howitzer heavy artillery, anti-aircraft Stinger and anti-tank Javelin missiles.

Biden also wants the ability to seize more money from Russian oligarchs to pay for the war effort.

His proposal would let US officials seize more oligarchs’ assets, give the cash from those seizures to Ukraine and further criminalise sanctions dodging, the White House said.

The proposed steps include letting the justice department use the strict US racketeering law once deployed against the mafia, the Racketeer Influenced and Corrupt Organizations (Rico) Act, to build cases against people who evade sanctions.

Biden also wants to give prosecutors more time to build such cases by extending the statute of limitations on money-laundering prosecutions to 10 years, instead of five. He would also make it a criminal act to hold money knowingly taken from corrupt dealings with Russia, according to a summary of the legislative proposals.

The measures are part of US efforts to isolate and punish Russia for its February 24 invasion of Ukraine, as well as to help Kyiv recover from a war that has reduced cities to rubble and forced more than 5-million people to flee their homes.

Biden has already asked for record peacetime sums to fund Pentagon research & development, and efforts to counter perceived threats from countries including Russia.

The full package represents a fifth of pre-war Ukrainian annual economic output, and the $20bn US military assistance alone is about a third of what the Russian military spent overall last year, before the war began.

A package would include food security assistance, economic stimulus for Ukraine and funding to use the Cold War-era Defense Production Act to expand domestic production of key minerals in short supply due to the war.

But the funding measure may face issues on Capitol Hill. Biden asked for $22.5bn in money for the Covid-19 response in March and Democrats with narrow control of the Senate and House of Representatives may push to have that passed at the same time as the Ukraine measure.

While legislators are broadly supportive of spending on Ukraine, Republican congressional aides said on Thursday that efforts to combine the war funding with the pandemic response could make it difficult to pass.

“I don’t care how they do it,” Biden said. “They can do it separately or together, but we need them both.”

US military aid to Ukraine alone has topped $3bn since Russia launched what it calls a “special military operation” to demilitarise Ukraine. Kyiv and its Western allies reject that as a false pretext.

The US and its European allies have frozen $30bn of assets held by wealthy individuals with ties to Russian President Vladimir Putin, including yachts, helicopters, real estate and art, the Biden administration has said.

Will that push Russia ever closer to the use of chemical, biological or small-scale nuclear weapons?
Opinion
3 weeks ago

More than 40 countries represented at the recent US-hosted defence talks in Germany believe Ukraine can win the war and will deliver arms to the ...
World
3 weeks ago