Cuba accuses US of trying to block it from Americas summit 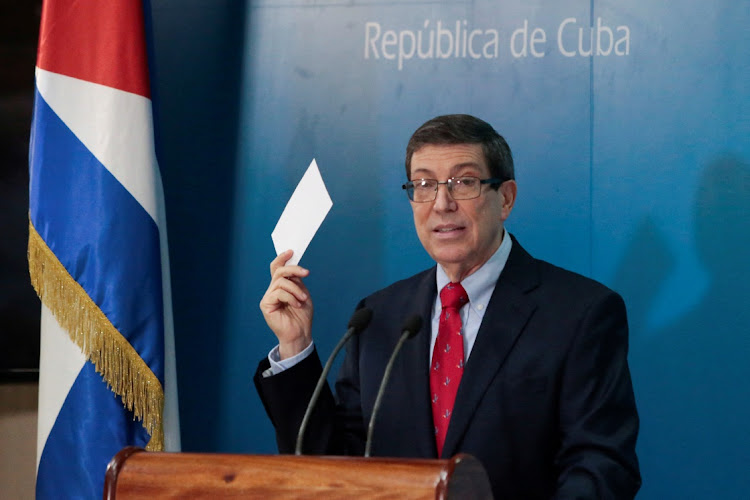 Havana  — Cuban foreign minister Bruno Rodriguez said on Monday that the US had decided to exclude Cuba from preparations for a summit of regional leaders, a setback for relations just days after they held their first high level talks in four years.

Rodriguez said the US was pressuring regional governments to block Cuba from participating in the Summit of the Americas in June in Los Angeles.

“The government of the US has decided to exclude Cuba from the preparations for the ninth Summit of the Americas,” Rodriguez told reporters.

He said US officials were already leaving Cuba out of pre-summit conversations on such issues as a regional health strategy and migration, both of vital interest to the island’s leaders.

“I respectfully call on secretary of state (Antony) Blinken to say, in an honest way, if Cuba will be invited or not.”

A US state department spokesperson said that: “No invitations (to the summit) have been issued from the White House at this time.”

The US, at odds with Cuba since the early days of Fidel Castro’s 1959 revolution, further ratcheted up sanctions against its foe under former president Donald Trump, cutting off most travel and remittances between the US and the island.

Relations have remained tense under US President Joe Biden, whose administration has alleged human rights violations against Cubans who protested in widespread rallies on the island last July.

Cuba participated in both the 2015 and 2018 Summit of the Americas, after allying governments pressured for their inclusion, but had not previously attended the gathering. The summits often showcase discussions and agreements among member nations around democracy and human rights.

Rodriguez, in a televised address to reporters in Havana, noted the mixed messages emanating from the Biden administration after last week’s talks on migration between high level Cuba and US officials in Washington.

“It is paradoxical because ... we have just had official migratory conversations, which were undoubtedly a positive sign,” Rodriguez said.

Those talks, however, did not yield fresh agreements to deal with the burgeoning crisis.

Rodriguez reiterated Cuba’s concerns that the US is seeking to foment unrest on the island by tightening Cold War-era sanctions to create economic hardship while at the same closing doors to Cubans seeking to migrate.

“This incoherent, contradictory policy of tightening the blockade and wanting to restrict migration, pretending to discuss these issues in the hemisphere and excluding Cuba, says a lot,” Rodriguez said.

The number of Cuban migrants arriving at the border with the US has recently spiked amid a festering economic crisis in Cuba, nearly doubling in March over the previous month alone, according to US customs and border protection data.

Cuba’s government has demanded the US issue more visas and restore consular services in Havana for Cubans wishing to travel to the US.

Three senior SANDF officials who headed the lobby for unregistered drug could face charges, while CFO Siphiwe Sokhela refused to give in to their ...
National
2 months ago

Cuba accounts for virtually no trade with SA, yet this country has lavished billions on the Caribbean island state. Is the ANC’s loyalty to ...
Features
2 months ago
Next Article