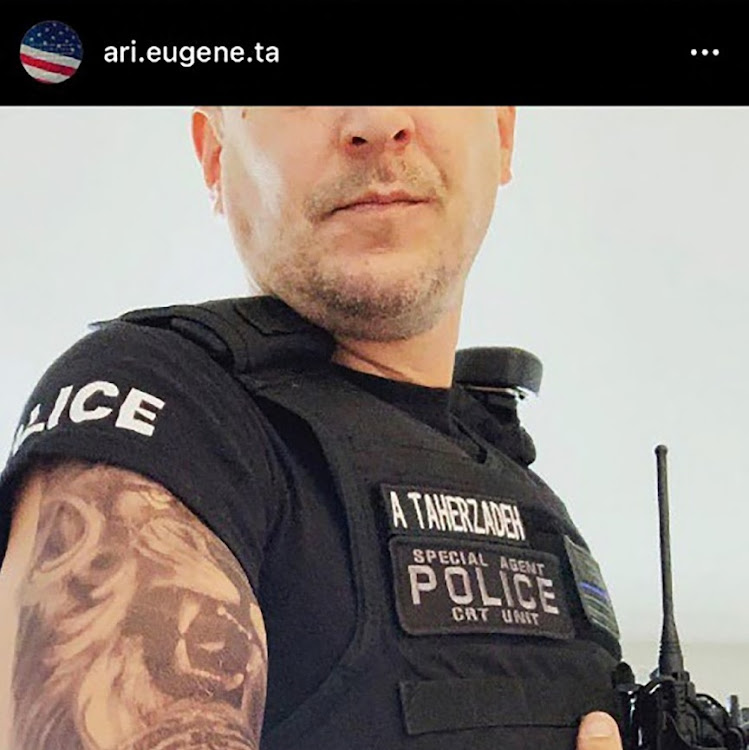 Arian Taherzadeh in an undated photo wearing a police tactical uniform that the FBI says he sent to a US Secret Service agent. FEDERAL BUREAU OF INVESTIGATION/REUTERS

Washington — Before Arian Taherzadeh was arrested for impersonating a US law enforcement agent, he portrayed himself as a wealthy playboy who wore flashy watches, drove luxury cars and could afford sponsorships and VIP seats at Washington professional sports games.

There was only one problem with his cover story: he never paid any of his bills.

Taherzadeh and partner Haider Ali’s April 6 arrest by the FBI led the Secret Service to place four agents on leave for allegedly accepting gifts from them, news that stunned Washington and briefly raised worries of possible national security threats.

In the years leading up to his arrest, Taherzadeh and his now-defunct companies left behind more than $1m in debt owed to car dealership financing arms, sports companies, financial institutions, former employees, county governments, apartment and office complexes, and a DJ company, a review of court records and other documents show.

In at least 12 cases, Taherzadeh did not show up to court, leading judges to issue default judgments against him. 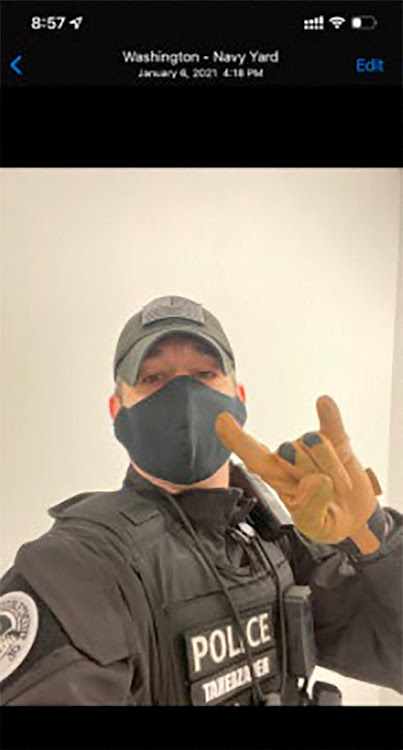 Arian Taherzadeh is seen in a January 2021 photo wearing a department of homeland security uniform. Picture: FEDERAL BUREAU OF INVESTIGATION/REUTERS

In a brief interview on Thursday at the front door of his father’s house in Sterling, Virginia, where Taherzadeh is on house arrest awaiting trial, he did not dispute the trail of defaults shown in the court records.

“I think a lot of it is being taken out of context,” Taherzadeh said. “I can’t say anything else, I’m sorry.”

He added that people can say whatever they want to say about him. “Everybody’s an opportunist right now,” he said.

Ali, who is also accused of impersonating a federal agent, tried unsuccessfully to sue Taherzadeh in 2017 for $150,000 in unpaid wages and for failing to repay a $1m loan, court records show.

None of the money Taherzadeh owes has been recovered, court records show.

Taherzadeh’s public defender, Michelle Peterson, declined to comment. Taherzadeh and Ali have not yet entered formal pleas to the criminal charges.

Prosecutors say Taherzadeh and Ali lavished gifts on Secret Service agents, including one assigned to protect First Lady Jill Biden, such as rent-free apartments in a Washington luxury complex, drones, iPhones and firearms.

When the FBI raided properties associated with the men, it recovered so many weapons, surveillance equipment, hard drives and other evidence that it needed a moving truck to haul it all away.

A judge determined the two were not a danger or a flight risk and released them to house arrest.

Gregory Smith, Ali’s attorney, said in court his client was duped by Taherzadeh. He told Reuters that prosecutors presented an inaccurate account of his client: “The facts have not matched the rhetoric.”

Court records and other documents illustrate the debts and defaults Taherzadeh left behind before he began allegedly posing as a federal law enforcement agent.

“Ari went from being an entrepreneur playboy for like five years ... to being reformed and police-like and a military wannabe,” said one former business associate, who said Taherzadeh had taken money from his personal account.

The associate, who asked for anonymity out of concern for possible retaliation, showed Reuters communications with his financial institution complaining about the stolen funds. In one email, he attached a document which showed that one business where some funds were spent had agreed to credit him back for a portion of the alleged stolen funds.

At about the same time, he was an employee of the United Negro College Fund, which offers scholarships for students attending historically black colleges and universities.

People who knew Taherzadeh told Reuters they were wowed by his tech skills. An AET income statement dated December 2015 seen by Reuters said the company had about $15.8m in revenue and recorded profit of more than $4m that year.

“I was impressed,” said Moses Kamai, who was hired by AET in December 2015 as a programme management director and offered a $190,000 salary, a few days after he attended a presentation Taherzadeh gave to United Negro College Fund. “His pitch was solid.”

The fund’s general counsel confirmed Taherzadeh worked there until 2014, and that he made a business pitch, but said the fund never took him up on his proposal.

Kamai said he tried to bring in business, and that he flew to Hawaii to set up a deal with state officials for AET to open an office there.

When it came time to reimburse Kamai for his expenses and sign the paperwork with Hawaii, however, Taherzadeh refused. Then, Kamai’s pay cheques never showed.

At the same time, Taherzadeh was posting photos on his private Instagram account of luxury Mercedes and a Centurion Black American Express card reserved for the wealthiest clients, according to copies seen by Reuters.

Taherzadeh also pursued sponsorship deals and VIP box seats with Monumental Sports & Entertainment, which owns the Washington Capitals NHL team and the Washington Wizards NBA team, and the owners of what is now known as Capital One Arena, according to court records, photographs and two people familiar with the matter.

In February 2016, Taherzadeh bought a two-year licence for a six-seat luxury suite worth more than $400,000, court records show.

In September 2015, he entered a sponsorship deal with Monumental Sports, agreeing to pay more than $300,000 for his AET company name and logo to be displayed on the scoreboard and elsewhere during games, according to a court record.

Taherzadeh agreed to donate 50 game tickets to members of the US military, in exchange for AET being recognised as an official sponsor on Military Night, the court records show.

Images posted on Taherzadeh’s AET Instagram account on February 6 2016 show him attending Military Night and standing next to high-ranking military officials, including Mark Milley, now chair of the joint chiefs of staff.

A spokesperson for Milley said he does not recall meeting Taherzadeh at the event. A Monumental Sports spokesperson declined to comment.

A judge awarded the arena and Monumental Sports combined more than $376,000 in 2017, and Mercedes-Benz Financial won a 2019 default judgment for nearly $20,000 on unpaid leases.

Kamai won a default judgment for more than $292,000 for lost wages and unpaid expenses. But every time his attorney has tried to garnish potential bank accounts for Taherzadeh, he has hit a dead end, Kamai’s attorney said.

Court records from Kamai’s legal case show bank accounts Taherzadeh held with HSBC were closed in late April and early May 2016, a few months after a cheque he wrote for $65,000 to Monumental Sports bounced.

The closures did not stop him from pursuing other opportunities.

Taherzadeh started looking at homes around the Washington area and in June 2016 he placed an offer for a $5m home in McLean, Virginia, according to a copy of the offer seen by Reuters and three people involved in the sale.

“He said he was worth millions,” recalled John Lueders, the former homeowner.

Taherzadeh presented a redacted HSBC cheque account statement that showed he had about $1m in the bank, a copy of which was reviewed by Reuters.

The statement was dated for the period ending June 11 2016, about a month after his accounts at HSBC had been shuttered.

Taherzadeh never came up with the funds, and the home was sold to another buyer.

At the same time, Taherzadeh also tried to buy a McLaren 650S Spider sports car for more than $356,000, according to a buyer’s order seen by Reuters, and two people familiar with the matter.

The sale never materialised, one of the people said.

By 2018, Taherzadeh was buying firearms, according to federal prosecutors, as he allegedly began to present himself as a department of homeland security agent.

Meanwhile, those who are owed money say they were never able to get it back.

The former business associate who said he was scammed for thousands of dollars shared what he said was a text message exchange he had with Taherzadeh.