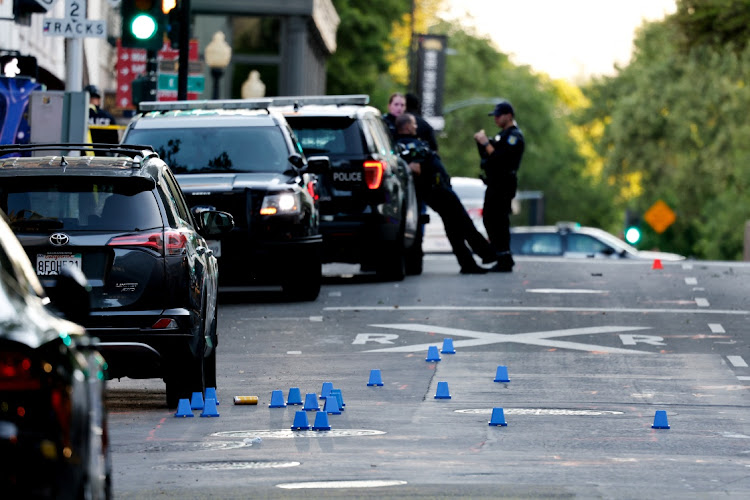 Evidence markers are seen on the ground at the crime scene after an early-morning shooting in Sacramento, California, the US, April 3 2022. Picture: FRED GREAVES/ REUTERS

Sacramento — Six people were killed and 12 injured in an early-morning shooting on a Sacramento, California, street busy with revellers, and police said they were still searching for at least one gunman.

Police said in a statement that they had recovered “at least” one firearm at the scene and had located 12 victims “with varying degrees of injuries”.

Several blocks were cordoned off by officers and dotted with blue and red plastic cones that marked evidence. Police released no details on the ages or identities of the victims.

“We are asking for the public’s help in helping us to identify the suspects in this and provide any information they can to help us solve this,” Sacramento police chief Kathy Lester told reporters.

The shooting occurred at about 2am, Lester said, near the Golden 1 Center, an arena where the Sacramento Kings basketball team plays and concerts take place.

“The numbers of dead and wounded are difficult to comprehend. We await more information about exactly what transpired in this tragic incident,” mayor Darrell Steinberg said on Twitter. “Rising gun violence is the scourge of our city, state and nation, and I support all actions to reduce it.”

Family members waited outside the police lines seeking news about missing loved ones.

Among them was Pamela Harris, who said her daughter had called her at 2.15am to say that her 38-year-old son, Sergio, had been shot and killed outside a nightclub.

“She said he was dead. I just collapsed,” Harris said. She said she was still waiting on official confirmation from police, adding, “I cannot leave here now until I know what’s going on. I'm not going anywhere. It seems like a dream.”

The violence occurred just blocks from the state capitol building in an area recently revitalised as an entertainment centre. It shattered the welcoming atmosphere as pandemic masks started coming off in the past week and bars and restaurants began filling with people long isolated by Covid-19.

The incident comes a little more than a month after a man shot and killed his three children and a fourth person before taking his own life in the same city.

In a separate shooting overnight in Dallas, Texas, a man was killed and 11 other people were injured after a person opened fire into a crowd at a concert, Dallas police said. The incident is being investigated, the police added.

Alleged attacker, who was an employee of San Jose’s transit service, died at the scene
World
1 year ago

Police were responding to traffic congestion reports when shots were heard, a spokesperson says
World
1 year ago
Next Article