Production at Peru’s Las Bambas mine plunges due to protests

Owner of the mine, China’s MMG, warned on Monday that it may have to halt operations at the mine by February 20 if the blockade is not lifted 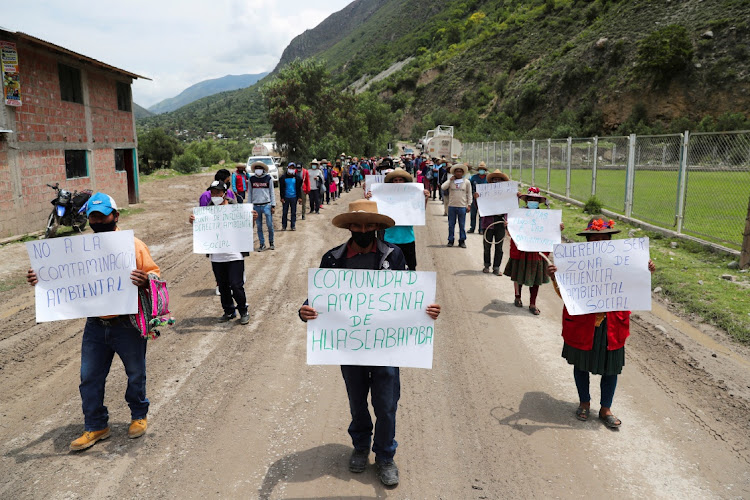 People march with signs reading "No to environmental contamination" and "Farming community of Huascabamba" as community leaders rejected a government proposal to prevent future blockades affecting the Las Bambas copper mine, in Sayhua, Peru on January 17 2022. Picture: REUTERS/SEBASTIAN CASTANEDA

Lima — Mining activity at Peru’s huge Las Bambas copper mine, which accounts for 2% of global supply, has started to fall sharply after protesters blocked an access road late in January, according to unreported power use data and a company source.

The mine, owned by China’s MMG, has been a flashpoint of protests since it started operating in 2016. MMG warned on Monday that it may have to halt operations at the mine by February 20 if the blockade is not lifted.

However, electricity demand data for the mine, seen by Reuters, shows that activity already started to plunge on February 2. A company source confirmed it was due to the impact of the blockade on activity at the mine.

Electricity demand at the mine has dropped 40% since, according to data from COES, a body that represents companies in Peru's domestic energy sector.

“The data does indeed show lower consumption,” said Gonzalo Tamayo, a former mining minister and partner at consultancy Macroconsult. “It's a preview of what could happen if the blockade continues.”

The source from Las Bambas who asked not to be named said the fall in electric demand was due to a “progressive winding down of operations” since the blockade started on January 27. Las Bambas declined to comment.

The swift fall in electricity demand underscores how sensitive a mine like Las Bambas is to road blockades, which have increasingly become a tool of local communities looking to pressure mining firms to make payouts or create local jobs.

That has mushroomed under leftist President Pedro Castillo who came to power in July last year pledging to redistribute the country's mineral riches.

The mining corridor highway has become a target of protest.

Since the mine opened in 2016, residents have blocked it for over 400 days, complaining that copper trucks pollute their crops and kill their animals and that the mine does not contribute financially to local communities’ wellbeing.

The current blockade is taking place at the Ccapacmarca district in the province of Chumbivilcas, were residents are demanding the presence of Castillo and financial contributions from Las Bambas.

Former prime minister Mirtha Vasquez failed to reach an agreement after travelling to Ccapacmarca in mid-January, which triggered the current blockade. Vasquez recently resigned, leaving a political vacuum and stoking crisis in the government.

Volcano-triggered tsunamis have been rare in modern history, and the shockwave from Tonga’s volcano was among the largest ever recorded
World
6 months ago