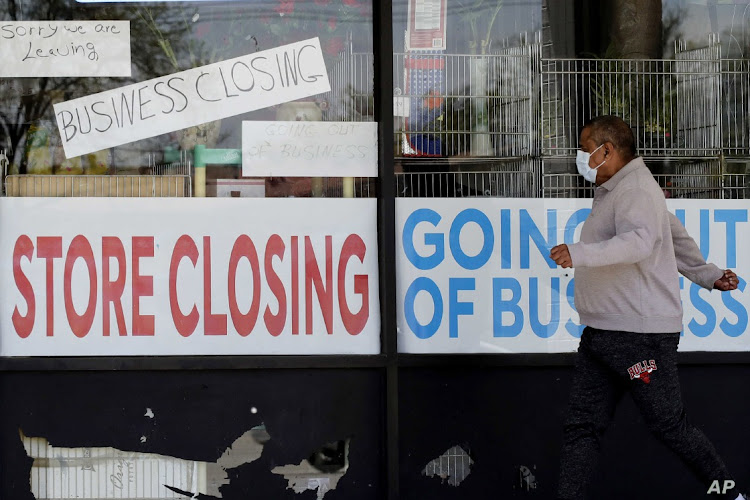 A man looks at signs of a closed store in Niles, Illinois, the US in March 2021. Picture: LULAMILE FENI/REUTERS

Washington  — The number of Americans filing new claims for unemployment benefits jumped to a three-month high, likely as a winter wave of Omicron infections disrupted business activity, which could constrain job growth in January.

Initial claims for state unemployment benefits surged 55,000 to a seasonally adjusted 286,000 for the week ended Jan. 15, the highest level since mid-October, the labor department said on Thursday. The increase was the largest since last July. Claims have now risen for three straight weeks.

“Even with the usual noise in the numbers they seem to reflect the record rise in Covid-19 cases from Omicron,” said Robert Frick, corporate economist at Navy Federal Credit Union in Vienna, Virginia. “Fortunately Omicron is peaking and if past patterns hold, claims should drop quickly in the next two to three weeks.”

Economists polled by Reuters had forecast 220,000 applications for the latest week.

Unadjusted claims fell 83,418 to 337,417 last week. The decline was, however, less than the 138,773 decrease that had been anticipated by the seasonal factors, which the government uses to strip seasonal fluctuations from the data.

Claims rose 6,075 in California. But they plunged 14,011 in New York. There were also big drops in Missouri and Texas.

The US is reporting an average of 732,245 new coronavirus infections a day, according to a Reuters analysis of official data, in a winter surge driven by the Omicron variant. There are, however, signs that cases are starting to subside in some regions, including hard-hit New York. Claims could start trending lower as infections decline.

Still, labour market conditions are tightening. Claims have plunged from a record high of 6.149-million in early April 2020. Employers are desperate for workers, with 10.6-million job openings at the end of November.

The unemployment rate is at a 22-month low of 3.9%, a sign the labour market is at or close to maximum employment.

The claims data covered the period during which the government surveyed businesses for the nonfarm payrolls component of January’s employment report. Claims are significantly higher than their level in mid-December.

Worker shortages and the disruptions caused by Omicron through absenteeism, reduced operations or temporary business closures, could result in payrolls gains remaining moderate this month. The economy added 199,000 jobs in December, the fewest in a year. The workforce is about 2.2-million people smaller than before the pandemic.

The claims report showed the number of people receiving benefits after an initial week of aid rose 84,000 to 1.635-million in the week ending on January 8. These continuing claims stayed below 2-million for the eighth straight week.

The annual consumer price figure hit 2017 highs in December as it rose above the 5.7% the market expected
Opinion
3 months ago

The job market has improved, consumer credit is surging, GDP growth is up and the dollar is shining
Opinion
4 months ago

The US Treasury again stopped short of labelling any foreign economies as manipulators of their exchange rates, while continuing to say that Taiwan ...
World
5 months ago
Next Article