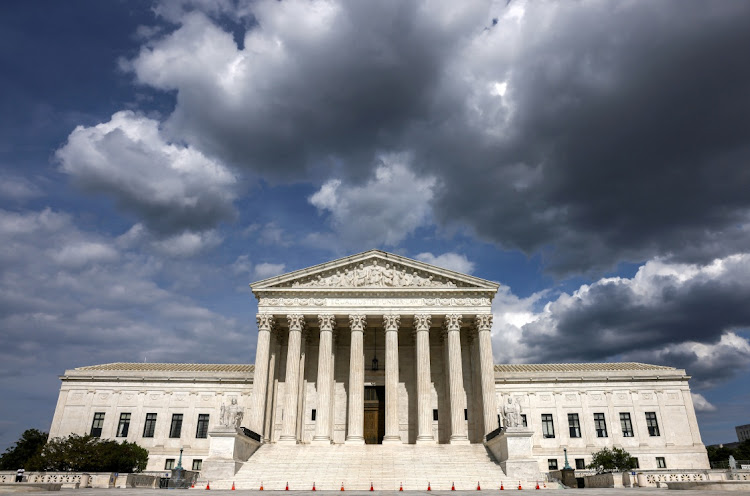 The US Supreme Court in Washington, the US. Picture: EVELYN HOCKSTEIN/REUTERS

Washington  — The US Supreme Court on Thursday blocked President Joe Biden’s pandemic-related vaccination-or-testing mandate for large businesses at a time of escalating Covid-19 infections while allowing his administration to enforce its separate vaccine requirement for healthcare facilities.

The court acted after hearing arguments last Friday in the legal fight over temporary mandates issued in November by two federal agencies aimed at increasing US vaccination rates and making workplaces and healthcare settings safer. The cases tested presidential powers to address a swelling public health crisis that already has killed more than 845,000 Americans.

The court was divided in both cases. The court ruled 6-3 with the six conservative justices in the majority and three liberal justices dissenting in blocking the broader workplace ruling. The vote was 5-4 to allow the healthcare worker rule, with two conservatives, chief justice John Roberts and justice Brett Kavanaugh, joining the liberals in the majority.

The federal workplace safety agency issued a rule affecting businesses with at least 100 workers requiring vaccines or weekly Covid-19 tests — a policy applying to more than 80-million employees. Challengers led by the state of Ohio and a business group asked the justices to block the Occupational Safety and Health Administration (OSHA) rule after a lower court lifted an injunction against it. Companies were supposed to start showing they were in compliance starting this past Monday.

The unsigned ruling said that the OSHA rule was not an ordinary use of federal power.

“Requiring the vaccination of 84-million Americans, selected simply because they work for employers with more than 100 employees, certainly falls in the latter category,” the court wrote.

“It is instead a significant encroachment on the lives — and health — of a vast number of employees,” the court said.

In dissent, justice Stephen Breyer wrote on behalf of the liberal justices that the decision “stymies the federal government's ability to counter the unparalleled threat that Covid-19 poses to our nation's workers”.

The high court blocked a December 17 decision by the Cincinnati-based 6th US Circuit Court of Appeals that had allowed the mandate to go into effect.

The court’s order blocking enforcement while litigation continues in a lower court likely signals doom for the administration's attempt to boost vaccination numbers by harnessing federal powers to protect workplace health and safety. During the oral argument, conservative justices expressed scepticism about the legality of that approach.

The other mandate required vaccination for an estimated 10.3 million workers at about 76,000 healthcare facilities including hospitals and nursing homes that accept money from the Medicare and Medicaid government health insurance programs for elderly, disabled and low-income Americans.

The justices lifted orders by federal judges in Missouri and Louisiana blocking the policy in 24 states, allowing the administration to enforce it nearly nationwide. Enforcement was blocked in Texas by a lower court in separate litigation not at issue in the case before the Supreme Court.

Workers must be vaccinated by the end of February under the mandate.

The White House has said the two mandates will save lives and strengthen the US economy by increasing the number of vaccinated Americans by the millions. US solicitor-general Elizabeth Prelogar told the justices that the pandemic poses a particularly acute workplace danger, with employees getting sick and dying every day because of their exposure to the coronavirus on the job, with outbreaks across all industries.

The challengers argued that the two federal agencies overstepped their authority in issuing the mandates without specific authorisation by Congress.

The Supreme Court’s consideration of the challenges to the mandates underscored how divisive the issue of vaccination has become in the US, as in many nations. Many Republicans have been critical of vaccine mandates imposed by governments and businesses.