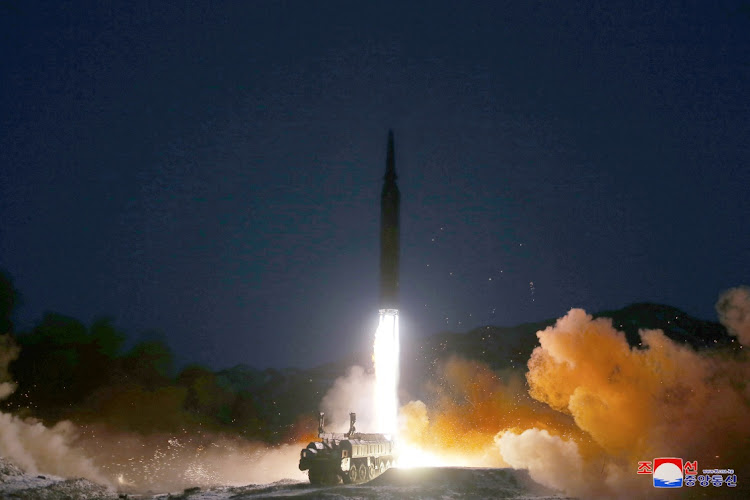 A missile is launched during what state media reported was a hypersonic missile test at an undisclosed location in North Korea, January 11 2022. Picture: KCNA/REUTERS

Washington  — The US on Wednesday imposed sanctions on six North Koreans, one Russian and a Russian firm it said were responsible for procuring parts from Russia and China for North Korea’s weapons programmes, an action that follows a series of North Korean missile launches, including two since last week.

The US treasury department said the steps aimed to prevent the advancement of North Korea’s weapons programmes and impede its attempts to proliferate weapons technologies.

It said they followed six North Korean ballistic missile launches since September 2021, each of which it said violated multiple UN Security Council Resolutions.

US under secretary of the treasury for terrorism and financial intelligence Brian Nelson said the moves targeted North Korea’s “continued use of overseas representatives to illegally procure goods for weapons.”

North Korea's latest missile launches were “further evidence that it continues to advance prohibited programmes despite the international community’s calls for diplomacy and denuclearisation”, Nelson said in a statement.

The statement said the US state department had designated Russia-based North Korean Choe Myong Hyon, Russian national Roman Anatolyevich Alara and the Russian firm Parsek for “activities or transactions that have materially contributed to the proliferation of weapons of mass destruction or their means of delivery”.

The treasury said Sim, based in Dalian, had worked to procure steel alloys and Kim Song-hun, who was based in Shenyang, software and chemicals.

North Korean leader Kim Jong-un called for a boosting of his country’s strategic military forces while observing the test of a hypersonic missile on Tuesday, North Korean state media said.

The second test in less than a week underscored Kim Jong-un’s New Year vow to bolster the military with cutting-edge technology at a time when talks with South Korea and the US have stalled.

Tuesday’s test occurred hours after the US mission to the UN, joined by Albania, France, Ireland, Japan and the UK, condemned last week’s launch and called on UN member states to fulfil their sanctions obligations.

UN Security Council resolutions ban all North Korean ballistic missile and nuclear tests and have imposed sanctions over the programmes.

Wednesday’s actions freeze any US-related assets of those targeted and prohibit all dealings with them.