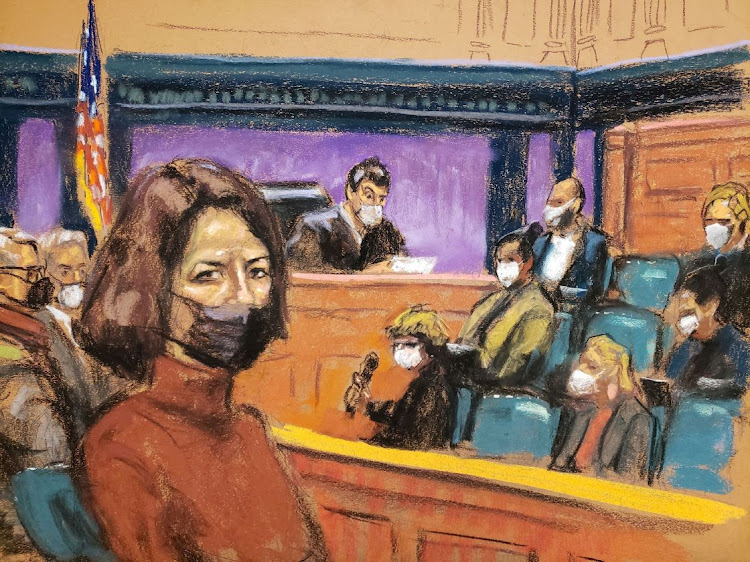 Jeffrey Epstein associate Ghislaine Maxwell sits as the guilty verdict in her sex abuse trial is read, in this court sketch in New York, the US, December 29 2021. Picture: JANE ROSENBERG/REUTERS

New York — The possible failure of a juror in Ghislaine Maxwell’s trial to disclose that he was a victim of sexual abuse may not be enough to overturn the British socialite’s sex trafficking conviction and warrant a new trial, legal experts say.

Maxwell, 60, was convicted on December 29 2021 on sex trafficking and other charges for recruiting teenage girls to have sexual encounters with Jeffrey Epstein. Her lawyers asked for a new trial after the juror told Reuters and other news outlets that he shared his experience of sexual abuse during deliberations.

It was unclear whether the juror, who asked to be identified by his first and middle names, Scotty David, revealed that experience during pretrial vetting.

But not all instances of jurors failing to disclose information were significant enough to merit a new trial, experts said, noting that many instances where verdicts were overturned involved jurors who deliberately omitted information to try to get on the panel.

“The system does not favour overturning verdicts. We value finality,” said Laurie Levenson, a professor at Loyola Law School in Los Angeles, adding that the judge has “broad discretion” in this case.

In US court cases, prospective jurors who the judge decides are biased or have a conflict of interest can be dismissed for cause. After that, both the defence and prosecutors can each dismiss a certain number of jurors for no particular reason, known as a peremptory strike.

Prospective jurors in the Maxwell case were asked during a pretrial questionnaire whether they had ever been sexually abused. Those who answered “yes” were later questioned by US district judge Alison Nathan about whether they could be impartial, court records show.

Scotty David told Reuters on Tuesday he “flew through” the form. He said he did not remember a question that asked if he was ever a victim of sexual abuse, but would have answered honestly. He told Reuters he was not asked about any personal experience with sex abuse in follow-up questioning.

Some experts said they expected Nathan to examine whether Scotty David could still have been impartial despite his experience with abuse. In deliberations, jurors are allowed to relay their personal experiences so long as they do not use it in place of evidence.

But they said Nathan might be limited in asking what happened in the jury room since judges consider the secrecy of deliberations sacrosanct.

For example, in 2016, a New York state judge declined to overturn the manslaughter conviction of a New York City police officer Peter Liang despite a juror’s failure to disclose during jury selection that his estranged father had been convicted of manslaughter.

The judge said the defence had not shown the juror’s actions violated Liang’s right to a fair trial.

There is some precedent for new trials being ordered when jurors are dishonest. In 2012, the late US district judge William Pauley ordered a new trial for defendants convicted of running a tax shelter scheme, following revelations that a juror in that case had lied during pretrial screening.

The juror said she only had a bachelor’s degree and was a “stay-at-home wife” when she had actually graduated from law school. She later admitted to lying to make herself more “marketable” as a juror.

Pauley called the juror “a pathological liar” in his ruling and said that if the juror had answered honestly, he would not have let her serve.

The Maxwell case would likely have a different outcome, said Pace University law professor Bennett Gershman, who has written about jury misconduct. He noted that the jury acquitted Maxwell on one of the counts, suggesting they were responsible in their deliberations.

“It’s something that should have been revealed, but doesn’t seem to have compromised the verdict,” he said.

Jury found her guilty of five of the charges against her, including sex-trafficking of a minor, which carries a possible prison sentence of up to 40 ...
News
2 weeks ago