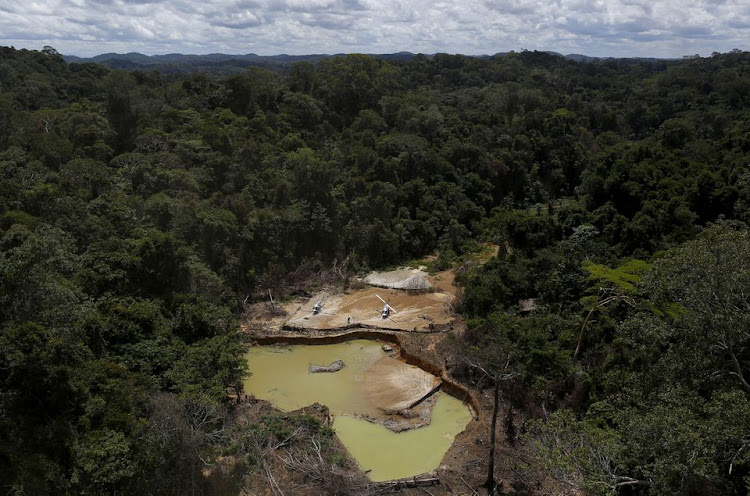 An illegal gold mine is seen during Brazil’s environmental agency operation against illegal gold mining on indigenous land, in the heart of the Amazon rainforest, in Roraima state, Brazil, April 17 2016. Picture: BRUNO KELLY/REUTERS

That is a particular worry to human rights defenders, as the country’s far-right President Jair Bolsonaro pushes plans to introduce or expand mining and farming in protected areas of the world’s largest rainforest.

That would include into indigenous territory, where mining is forbidden by Brazil’s constitution.

The spread of mines — with mercury used to extract gold from other minerals — is also helping drive Amazon deforestation, which has soared 22% in the past year to the highest levels since 2006, a government report showed in November.

The accelerating destruction comes despite Bolsonaro’s insistence that his government is serious about protecting the rainforest, which is considered crucial to staving off catastrophic climate change.

“So much destruction, so much deforestation has been happening with the mining. Mining is devastating our lives, leaving the river completely polluted. It is making people sick,” said 19-year-old Beka Munduruku of Sawré Muybu village, a leader of the community’s resistance movement against mining.

Mercury testing was carried out in 2019 by the federally funded biomedical institute Fiocruz, at the request of the Munduruku, who had been following the mining activities upriver and noticed the water in the Tapajós river turning cloudy.

That year, Brazil’s National Mining Agency estimated that wildcat gold miners were extracting about 30-tonnes of gold annually from the Tapajós watershed alone.

The mercury tests were led by Paulo Basta, an epidemiologist specialising in indigenous health, with the results published this year.

Basta and his team analysed hair samples from 197 people in three Munduruku villages and found some level of the toxic heavy metal in all of them, said Basta, a professor at Fiocruz.

Nearly 60% had levels above what global health organisations consider safe.

Researchers traced the contamination to fish, the community’s main source of protein, Basta said in an online interview.

The symptoms of mercury poisoning can range from vision problems and muscle weakness to mood and memory disorders. In extreme cases, it can lead to premature death.

Basta’s team administered tests to 52 Munduruku children under the age of six and found nine of them showed neurological symptoms linked to mercury contamination, including memory deficits and learning difficulties.

The epidemiologist expressed particular concern for children who were being exposed to the mercury from conception up to two years old.

“Those first thousand days are the most important in the (developmental) life of a human being,” he said. “In this time frame, the children already presented levels of contamination and neurodevelopmental delay.”

Illegal mining and deforestation go hand-in-hand, said Laize Sampaio, an environmental scientist at the University of São Paulo, whose research focuses on the  effects of wildcat mining along the Tapajós river basin in north Brazil.

Citing data collected in 2020 by Brazil’s space research institute INPE and by ISA, a socioenvironmental non-profit, Sampaio said parts of the Munduruku and Sai Cinza indigenous territories where illegal mining was spreading also had the highest rates of tree loss.

According to documents from Para state’s secretariat of environment and sustainability seen by Thomson Reuters Foundation, as of July 8 2021, more than 1,120ha of Munduruku land had been cleared for mining activities.

When the forest floor is disturbed, any mercury present in the soil can spread to contaminate other areas, said Sandra Hacon, a professor of public health and environment at Fiocruz.

“When large areas are deforested, you remobilise this mercury, which is a part of the soil, and it is deposited in the leaves,” said Hacon, who worked with Basta to analyse the Munduruku mercury contamination.

“And this mercury, in addition to being carried into the atmosphere, a large amount is carried to aquatic ecosystems.”

Clearing land for mining is not the only way mercury gets into the air and the water, Hacon noted, pointing to forest fires — which are becoming more frequent and intense as the planet gets warmer — as another way mercury can spread.

But Basta said illegal mining is by far the biggest culprit.

“It is estimated that in the entire Amazon region, about 90% of the contaminant mercury present in the environment comes from illegal mining activities,” he said.

Prompted by the Fiocruz research, shared with state officials before the publication of the scientific papers, the Para public prosecutor’s office is holding a civil inquiry into the causes of mercury contamination among the Munduruku.

Inquiry documents state the office is also investigating whether the state should be held accountable for not protecting the community’s health.

Brazil’s indigenous health agency Sesai told the Thomson Reuters Foundation in an emailed statement that it has been monitoring the water in Munduruku villages, looking at various parameters including turbidity and chlorine content, as well as pH and E coli bacteria levels.

The statement did not say how long they have been monitoring the water or whether they are also measuring mercury levels.

Sesai also said that in partnership with Fiocruz it had gathered a group of doctors and indigenous health-care workers to “carry out a plan of action to prevent diseases caused by mercury contamination in the territory”, without providing more details.

For the Munduruku, the health risk that mercury poses adds to evidence of how their community is being threatened by illegal mining and the destruction of the Amazon.

“The miners want to take over indigenous lands, but we say no. We’re not going to let that happen. It is from the forest, from the river, from the land that we make our living,” said Beka Munduruku, the indigenous leader.

“We fight to keep the river clean, (to protect) the game and the trees. We fight to leave the forest standing,” she said.