Index jumps 0.8% in November and biggest annual gain on record 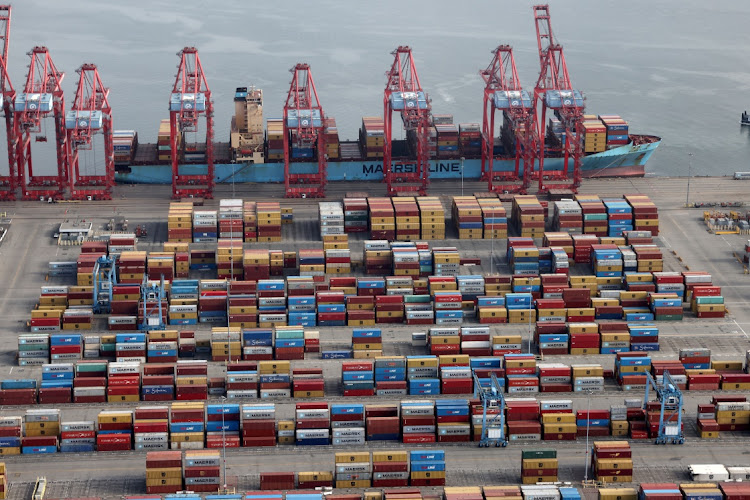 Shipping containers are unloaded from a ship at a container terminal at Los Angeles Port in California, the US, April 7 2021. Picture: LUCY NICHOLSON

Washington — US producer prices increased more than expected in November as supply constraints persisted, leading to the biggest annual gain since the series was revamped 11 years ago and supporting views that inflation could remain uncomfortably high for some time.

The report from the labor department on Tuesday, which also showed strong growth in underlying producer inflation, followed on the heels of news last Friday that annual consumer prices surged by the most since 1982 in November. Soaring inflation complicates President Joe Biden economic agenda, including a $1.75-trillion social policy and climate bill stuck in Congress.

Together with a tightening labour market, rising price pressures will probably see the Federal Reserve announcing that it will accelerate the tapering of its huge bond purchases when officials end a two-day meeting on Wednesday and potentially start raising interest rates sooner than previously expected.

“Price metrics have been running well above target for much longer than anticipated,” said Rubeela Farooqi, chief US economist at High Frequency Economics in White Plains, New York. “These data support the Fed’s switch to a faster taper that will probably precede a quicker tightening of policy next year.”

The producer price index for final demand jumped 0.8% in November after advancing 0.6% in October. The broad-based increase in the PPI was led by a 0.7% rise in services, which followed a 0.2% gain in October. The acceleration in services reflected a 2.9% jump in prices for portfolio management.

There were also increases in prices for hotel and motel accommodation, as well as airline fares and transportation of freight and mail. But prices for wholesale furnishings and bundled wired telecommunications access services fell.

Wholesale goods prices rose 1.2% after increasing 1.3% in October. Prices for iron and steel scrap rose 10.7%. There were also increases in wholesale petrol and food prices. But prices for diesel fuel fell, as did the cost of light motor trucks.

In the 12 months through November, the PPI shot up 9.6%. That was the largest gain since November 2010 and followed an 8.8% increase in October. Economists polled by Reuters had forecast the PPI climbing 0.5% on a monthly basis and surging 9.2% year on year.

The government reported last Friday that the consumer price index surged 6.4% in the 12 months through November, the biggest year on year rise since June 1982.

Trillions of dollars in Covid-19 pandemic relief from governments across the globe fuelled demand for goods, leaving supply chains overstretched. The normalisation of economic activity has also juiced demand for services, with the delivery of some being hampered by worker shortages, driving up prices.

Stocks on Wall Street were mostly lower. The dollar was flat against a basket of currencies. US treasury prices fell.

There are, however, some hopeful signs that the supply bottlenecks could be starting to ease. An Institute for Supply Management survey in December showed “some indications of slight labour and supplier delivery improvement” in November.

Crude oil prices have eased off recent highs and were approaching $73 a barrel on Tuesday after the International Energy Agency said that the Omicron coronavirus variant was set to dent the global demand recovery. Shipping costs are also off their recent peaks.

“Supply chain pressures should ease in the next few months as holiday shopping lets up and producers have more time to adjust capacity, but the impacts on producer prices and then to consumer prices will not be immediate,” said Will Compernolle, a senior economist at FHN Financial in New York.

“In the meantime, year on year changes in producer prices will remain high.”

Excluding the volatile food, energy and trade services components, producer prices surged 0.7%. The so-called core PPI gained 0.4% in October. In the 12 months through November, the core PPI jumped 6.9%, the largest rise since 12-month data were first calculated in August 2014, after marching 6.3% in October.

“While modal scenarios where inflation returns towards the 2% target over multiple years still make sense, risks of a more extended sojourn above target continue to rise and are clearly at their most elevated in at least 40 years,” said Andrew Hollenhorst, chief US economist at Citigroup in New York.

The core PCE price index accelerated 4.1% in the 12 months through October, the most since January 1991. Data for November will be released next Thursday.

At least 100 people are feared killed after a string of powerful tornadoes obliterated buildings, homes and anything else in their way in the ...
World
6 months ago

The Fed chair finally retired a phrase that had become increasingly meaningless. Now he has to manage the communication and policy challenges of the ...
Opinion
7 months ago