Sharp drop in weekly jobless claims to 184,000 comes as US economy recovers from the worst of the Covid-19 pandemic 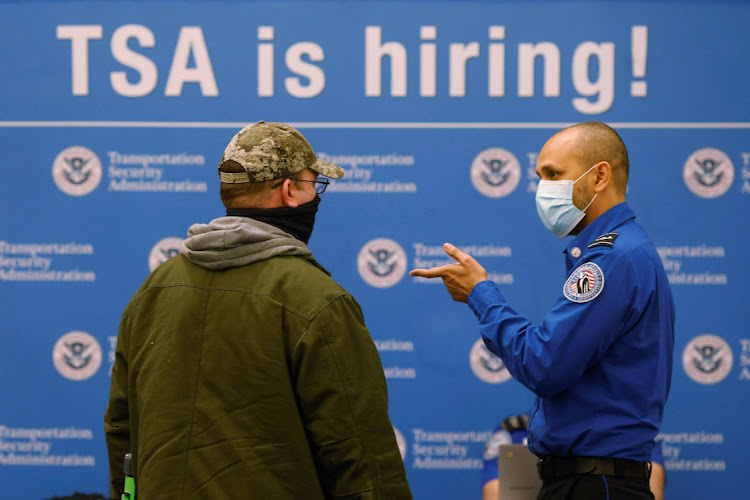 A job seeker talks to a representative from the TSA at a jobs fair at Logan International Airport in Boston, Massachusetts, the US, December 7 2021. Picture: BRIAN SNYDER/REUTERS

Washington  — The number of Americans filing new claims for unemployment benefits dropped to the lowest level in more than 52 years last week as labour market conditions continued to tighten amid an acute shortage of workers.

The plunge reported by the labour department in its weekly unemployment claims report on Thursday was, however, probably exaggerated by difficulties adjusting the data for seasonal fluctuations around this time of the year.

The claims report, the most timely data on the economy's health, followed on the heels of news last week that the jobless rate fell   to a 21-month low of 4.2% in November. Data on Wednesday showed there were 11-million job openings at the end of October and Americans quit jobs at near-record rates.

“While the latest data should be taken with a grain of salt given seasonal adjustments, we may be entering a stretch when lower-than-average layoffs continue until the 'Great Resignation' fades,” said Robert Frick, corporate economist at Navy Federal Credit Union in Vienna, Virginia.

Initial claims for state unemployment benefits tumbled 43,000 to a seasonally adjusted 184,000 for the week ended Dec. 4, the lowest level since September 1969. Economists polled by Reuters had forecast 215,000 applications for the latest week.

Claims have declined from a record high of 6.149-million in early April of 2020. Applications typically increase as the weather gets colder, but economists say this seasonal pattern is not holding because of a tightening labour market.

Unadjusted claims rose 63,680 to 280,665 last week, a smaller increase than had been anticipated.

“The seasonal factors had expected an increase of 106,047 (or 48.9%) from the previous week,” the department said in its report.

“The big jump in filings before seasonal adjustment was not fully realised, and the tight labour market may be limiting the amount of seasonal layoffs that take place around this time of year relative to norms,” said Daniel Silver, an economist at JPMorgan in New York.

Filings increased sharply in California, New York, Texas and Michigan. There were also notable rises in Minnesota, Illinois, Indiana, Oregon, Wisconsin, and Pennsylvania. Some of these states are experiencing a resurgence in Covid-19 infections.

The four-week moving average of initial claims, considered a better measure of labour market trends as it irons out week-to-week volatility, fell 21,250 to 218,750, the lowest level since March of 2020. It matches the average that prevailed from 2018 to 2019.

“The labour market continues to tighten on almost every metric and in almost every report that pertains to jobs,” said Conrad DeQuadros, senior economic adviser at Brean Capital in New York. “Layoffs are running at extremely low levels and consistent with a tight labour market when the unemployment rate averaged 3.8%.”

Labour market tightness bolsters Federal Reserve chair Jerome Powell's view that the US central bank should consider speeding up the winding down of its huge bond purchases at its policy meeting next week. It also puts an early Fed interest rate increase on the table.

The claims data aligns with other reports on consumer spending, manufacturing and services industries activity that have suggested the economy was regaining steam in the fourth quarter after a lull in the July-September period.

A separate report from the commerce department on Thursday showed the accumulation of wholesale inventories accelerated in October, supporting the stronger growth expectations.

Fourth-quarter GDP growth estimates are as high as an 8.6% annualised rate. The economy grew at a 2.1% pace in the third quarter.

But the spread of the Omicron variant of Covid-19 poses a risk to the economic outlook. While little is known about the affect of the new variant, some slowdown in hiring and demand for services is likely, based on the experience with the Delta variant, which was responsible for the slowest economic growth pace in more than a year in the past quarter.

Rising coronavirus infections could also delay the much anticipated return to the labour force by the millions of unemployed Americans, some of whom started trickling back in November. The workforce remains 2.4-million below its pre-pandemic level even as generous federal government-funded benefits have expired and schools reopened for in-person learning. Companies are also raising wages.

With a series of rate hikes in the offing, the next Fed meeting could surprise many
Opinion
6 months ago

HILARY JOFFE: Let’s hope Omicron doesn’t do as much damage as other variants have