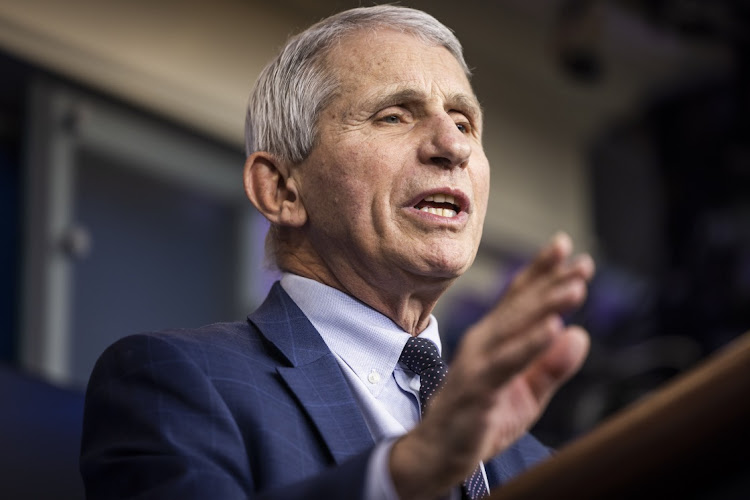 Anthony Fauci, director of the National Institute of Allergy and Infectious Diseases, speaks in Washington, DC, the US, December1 2021. Picture: JIM LO SCALZO/EPA/BLOOMBERG

Washington  — The Omicron variant of the coronavirus has spread to about one-third of US states, but the Delta version remains the majority of Covid-19 cases nationwide, US health officials said on Sunday.

Though the emergence of the new variant has caused alarm worldwide, Anthony Fauci, the top US infectious disease official, told CNN "thus far it does not look like there’s a great degree of severity to it" but he added that it was too early to draw definitive conclusions and more study is needed.

Fauci also hoped the US would lift its ban on travellers from Southern African countries in a "reasonable period of time", and praised SA for its transparency.

"We all feel very badly about the hardship that that might have put upon not only SA but the other African countries," he said.

“That ban was done at a time when we were really in the dark — we had no idea what was going on,” Fauci said. US medical advisers are evaluating the new restrictions on “a daily basis”.

The US has barred entry from SA, Botswana, Zimbabwe, Namibia, Lesotho, Eswatini, Mozambique and Malawi. While the apparently highly contagious variant was first identified in SA, some of those countries aren’t yet reporting cases.

The government has complained it is being punished — instead of applauded — for discovering the new variant and quickly informing international health officials.

Many of the cases were among fully vaccinated individuals with mild symptoms, although the booster shot status of some patients was not known.

Despite several dozen Omicron cases, the Delta variant still accounts for 99.9% of the 90,000 to 100,000 new cases of Covid-19 each day in the US health director  Rochelle Walensky told ABC News in an interview.

"We are everyday hearing about more and more probable cases so that number is likely to rise," she said.

Louisiana’s department of health said on Saturday that a Norwegian Cruise Line Holdings cruise ship set to dock in New Orleans with more than 3,000 passengers has detected 10 cases of Covid-19 on board.

The Norwegian Breakaway left New Orleans on November 28 and had stops in Belize, Honduras and Mexico, officials said, adding everyone on board would be tested and provided with post-exposure and quarantine public health guidance by the US Centers for Disease Control and Prevention (CDC).

Covid-19 vaccine makers are looking to quickly tweak their shots to target Omicron and US regulators have vowed speedy reviews, but that could still take months.

Moderna has said it could seek US approval for an updated vaccine as soon as March, but company officials in television interviews on Sunday said it still take time to increase output.

Moderna cofounder and chair Noubar Afeyan told CNN it would take another seven to 10 days to gather key Omicron data. Then, it "will take a good 60 to 100 days" to deploy an Omicron-specific shot, although other options like a higher dose of the current booster are being explored, he said.

Christmas parties are being cancelled across City of London

The panicked reaction across much of the world to the Omicron variant comes with a scramble for information. In SA, the country where Omicron was ...
News
8 months ago
Next Article