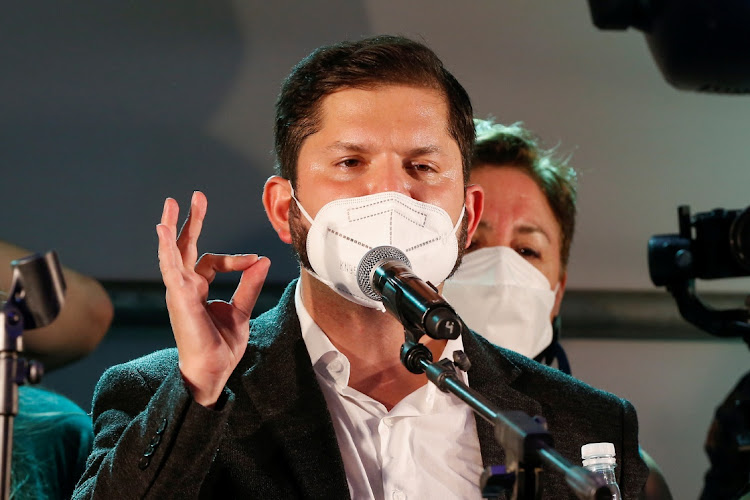 Chile's Presidential candidate Gabriel Boric speaks to supporters after the partial results of the first round vote during the presidential elections, in Santiago, Chile on November 21 2021. Picture: REUTERS/RODRIGO GARRIDO

Santiago — Former student protest leader and leftist legislator Gabriel Boric faces an uphill battle persuading voters from the vanquished centrist parties to back him rather than his hard right rival when Chile holds a presidential run-off election next month.

The 35-year-old former law student, leading a leftist coalition of the broad Frente Amplio and the Communist Party, was runner-up in a first-round vote on Sunday night, behind ultraright rival Jose Antonio Kast.

The two will compete head-to-head in a December 19 ballot, in which winning over centrist voters will be key.

“To win the second round we must be humble and receptive,” Boric said to supporters after the results came in on Sunday night, adding that held out belief that “hope wins over fear”. He acknowledged he needs to broaden his support.

“We have to expand it and go out to bring people in from far beyond our boundaries.”

That imbalance sparked off widespread angry social uprisings in 2019 that in turn lit the fuse for the political rise of the progressive left and the redrafting of the country’s Augusto Pinochet-era constitution.

“If Chile was the cradle of neoliberalism, it will also be its grave,” Boric said when he won the candidacy for his leftist bloc. “Do not be afraid of the youth changing this country.”

A native of Punta Arenas, in Chile’s far south, he had led the Federation of Students at the University of Chile in Santiago.

By 2014 Boric, still in his twenties, had joined the national Congress as a lower house legislator representing Chile’s vast and sparsely populated southernmost region of Magallanes.

With thick black hair and a trimmed beard, he is more groomed now than in his dishevelled student leader days. Though a known face of the left in Chile, Boric was initially a dark horse candidate for the presidency.

He just reached the threshold of 35,000 signatures needed to be a candidate. But then he beat out the popular capital mayor Daniel Jadue — of the Communist Party — to lead the leftist alliance.

Boric tempered his tone as the first round of the presidential election neared, as did Kast.

He has also looked to distance himself from some more extreme views from far-left groups in his alliance, including support from the Communist Party for the Venezuelan government of President Nicolas Maduro.

“What I am convinced is that to do politics one has to be willing to sit down to dialogue, to debate firmly with those who think differently from you,” Boric said in an interview with Chilean newspaper La Tercera at the end of 2019.

“Because staying in the comfort zone of speaking only with those who think the same as you can be satisfying, but it does not help make change.”

Absence of large countries such as China, Japan and Germany weakens the COP26 pledge
World
1 month ago
Next Article