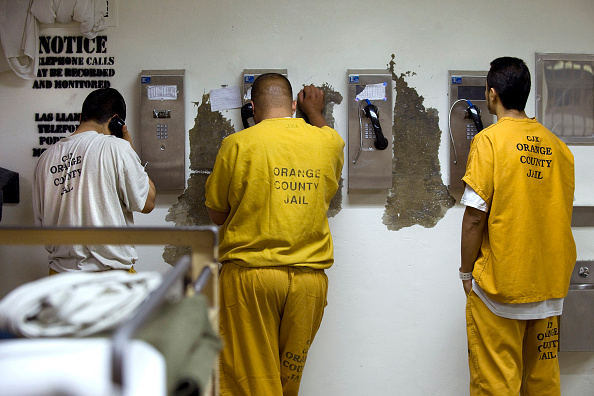 Los Angeles/Washington — When the sheriff in Suffolk County, New York, requested $700,000 from the US government for an artificial intelligence (AI) system to eavesdrop on prison phone conversations, his office called it a key tool in fighting gang-related and violent crime.

But the county jail ended up listening to calls involving a much wider range of subjects — scanning as many as 600,000 minutes per month, according to public records from the county.

The company and law enforcement officials say it is a crucial tool to keep prisons and jails safe, and fight crime, but critics say such systems trample the privacy rights of prisoners and other people, like family members, on the outside.

“T​​he ability to surveil and listen at scale in this rapid way — it is incredibly scary and chilling,” said Julie Mao, deputy director at Just Futures Law, an immigration legal group.

Suffolk County is among dozens of county jails and state prisons in seven US states — including major metro areas such as Houston, Texas, and Birmingham, Alabama — that LEO says have so far implemented the Verus system to monitor inmates’ calls.

Undersheriff Kevin Catalina, who helped run the programme in Suffolk County, said the system “unquestionably benefits public safety, and the safety of staff and inmates”.

Emails and contracts from eight states show the tool is used to scan a range of calls; for example, conversations involving mention of the Spanish word for lawyer or accusations that detention facilities were covering up Covid-19 outbreaks.

In Suffolk County, emails from the sheriff’s office show officials sometimes searched for words with multiple or benign meanings such as mara, which can mean gang or simply a group of friends.

Sheriff’s deputies in Suffolk County also circulated a regular intelligence brief of prisoners the system flagged for illegally collecting unemployment benefits while in the jail.

A series of court rulings have given US authorities broad scope to use surveillance of prisoners’ conversations as long as they are working to ensure safety and fight crime.

“All county inmates are notified that their phone calls are monitored,” Catalina said.

LEO Technologies, which declined to comment, says on its website that Verus is an “objective” way to flag threats to incarcerated people, “disrupt criminal operations within correctional facilities and assist ongoing investigations with critical evidence”.

The company is one of several that are offering or working to provide surveillance services, including the two main firms that already provide the infrastructure for prison phone calls — Securus and GTL, both of which market monitoring services.

“We are committed to protecting the civil liberties of all those who use our products,” a spokesperson for Securus said in a written statement.

GTL declined to comment when asked whether it was still proceeding with the technology and what safeguards were in place.

LEO advertises Verus as the most advanced system on the market.

In documents obtained through a records request to the Missouri Department of Corrections, it is described as unique among competitors in offering near-real-time analysis and actionable reports.

It is also hailed as a means to help law enforcement identify gang members by flagging “patterns of behaviour among inmates and their associates”.

Instead of trawling through hours of recorded calls, Catalina said the system “allows staff to be more efficient with their time by honing in on keywords that meet specific objectives”.

“There’s often no way to figure out if you’re on that kind of list, and how to get off it,” she said, adding that law enforcement in Suffolk County had a history of erroneously labelling Latino men as gang members.

Suffolk County did not respond to a request for comment on Lipton’s criticism.

Intelligence gleaned from the Verus system is already shared with current and potential LEO clients around the US, and more than 24 law enforcement and immigration agencies and divisions, according to documents from Suffolk County.

At the height of the Covid-19 pandemic last year, LEO — in partnership with prison authorities — expanded its focus to monitoring telephone conversations about the virus in detention facilities, documents show.

A data table circulated by the company to clients showed it had flagged thousands of calls based on keywords including “cough” and “infection” in the spring of 2020, highlighting its role in containing outbreaks among prisoners.

The technology was not just used to detect possible Covid-19 outbreaks, however. In Calhoun County, Alabama, prison authorities used Verus to identify phone calls in which prisoners vouched for the cleanliness of the facility, looking for potential ammunition to fight lawsuits, email records show.

As part of an emailed sales pitch to the jail in Cook County, Illinois, LEO COO James Sexton highlighted the Alabama case as an example of the system’s potential uses.

“[The] sheriff believes [the calls] will help him fend off pending liability via civil action from inmates and activists,” he wrote.

A spokesperson for Cook County said it had explored a pilot with LEO to help identify instances of “self-harm” in its facilities, but decided the technology was too expensive.

Public records show Verus is routinely deployed, for example, to identify inmates who might be contemplating self-harm or suicide, or find murderers and rapists inside and outside correctional facilities.

But Krent said surveillance operations like the one carried out in Alabama “really stretched the limit”.

During a similar operation in Suffolk County, the Verus system flagged a phone call in which an inmate tells his father the jail is covering up a Covid outbreak, and discusses contacting the media.

An official report about the phone call was shared with prison staff members and LEO employees, documents from Suffolk show.

Such incidents demonstrate how AI-powered surveillance tools can be used to identify prisoners who speak out against abuse or want to become whistle-blowers, Krent said.

“Protecting the interest and reputations of the people who run the jail is not a legitimate goal,” Krent said after reviewing the emails.

And despite the emphasis on gang activity and serious crime, emails from New York show authorities have begun using Verus to get leads on more minor offences — from using contraband cellphones to benefit fraud.

Earlier this year, Texas awarded a contract to LEO to work with facilities dealing with a recent surge in migrants trying to cross the US-Mexico border, after the governor declared a state of emergency.

“You can see how the justification changes over time,” said Daniel Schwarz, a technologist with the New York Civil Liberties Union who reviewed some of the documents.

In Suffolk County alone, Verus was used to monitor more than 2.5-million phone calls between its implementation in April 2019 and May 2020 — leading to 96 “actionable intelligence reports”, according to county documents.

But Krent said it was not clear whether the 96 reports justified sweeping several million phone calls. “There’s an avalanche effect. Once a technology like this is implemented it’s hard to let it go,” she said.

With prisons around the US rolling out more advanced surveillance systems, Schwartz said limitations must be put in place.

“We need to think about what happens to people when the only communication they have with their families and loved ones comes with a big surveillance target on their backs,” he said.

IBM and Amazon to work together on oil data tools

IBM and Amazon to work on expanding the reach of data tools that will help oil companies add non-petroleum assets such as wind and solar to their ...
Companies
3 weeks ago

Facebook is rebranding itself as Meta Platforms and working on a new ‘metaverse’ in which people will meet and communicate via VR and augmented ...
Opinion
3 weeks ago

European court upholds commission’s ruling that the search engine used its own price comparison shopping service to gain an unfair advantage over ...
Companies
4 weeks ago