In a trial that will scrutinise citizen’s arrest laws, jury will hear case of three white men accused of chasing and killing a Black jogger 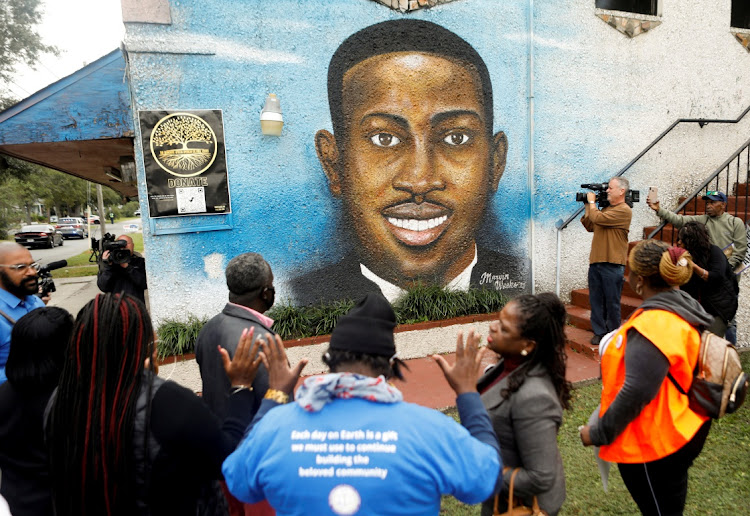 People gather to demand justice for Ahmaud Arbery in Brunswick, Georgia on November 4 2021 in front of a mural honouring him. Picture: REUTERS/OCTAVIO JONES

Brunswick, Georgia — In a trial that will scrutinise citizen’s arrest laws, an almost all-white Georgia jury will hear opening arguments on Friday in the case of three white men accused of chasing down and killing Black jogger Ahmaud Arbery, who they say they suspected was a burglar.

The shooting of Arbery, 25, in a suburb of the coastal city of Brunswick in February 2020 stoked national outrage after cellphone video taken by one of the three defendants became public more than two months later.

Arbery’s relatives, some of whom have attended jury selection since the trial began in Glynn County Superior Court in Brunswick on October 18, have alleged that Arbery was targeted on the basis of his race.

All have pleaded not guilty and face a sentence of life imprisonment if convicted on the murder charges. They have been brought daily from a nearby jail to attend jury selection, dressed in suits and ties. A jury of 11 white people and one Black person was chosen on Wednesday.

The McMichaels and Bryan chased Arbery in pickup trucks as he ran through the mainly white Satilla Shores neighbourhood on a Sunday afternoon before cornering and confronting him. Police say Travis McMichael fired a shotgun three times after Arbery initially grappled with the weapon and then turned to run.

The defendants said they suspected Arbery was a burglar and were trying to make a citizen’s arrest. Arbery had entered a nearby vacant property where a house was under construction, but the owner says nothing was taken and he believed Arbery had stopped by for a drink of water.

Defence attorneys argue that the men were acting within the scope of a now-defunct version of Georgia’s “citizen’s arrest” law, which allows people to detain someone they suspect has just committed a felony crime and is attempting to flee.

Spurred by the shooting, state lawmakers repealed the law, contending it was overly broad. Governor Brian Kemp said it was a “Civil War-era law, ripe for abuse.”

Defence attorneys are also claiming self-defence because the video recorded by Bryan shows Arbery turning towards Travis McMichael and grabbing his shotgun in what they say was an attack.

Prosecutors are expected to show jurors Bryan’s cellphone video as they seek to persuade jurors to convict the men on the most serious charges — malice murder and felony murder, which are Georgia’s versions of first-degree murder.

Prosecutors do not have to prove that the men set out to kill Arbery. Instead, they must show that the defendants killed Arbery with malice or while they were committing another felony, such as the aggravated assault charge the defendants also face.

“It’s the intent of the underlying offences and the result,” Mawuli Davis, an Atlanta-based civil rights attorney, said in an interview. “Did someone die while they committed those offences? That makes it murder whether they meant to kill or not.”

Arbery’s aunt Thea Brooks, 37, has been organising some demonstrations and said she plans to be outside the Glynn County courthouse as often as she can in support of her nephew, a former football star, whom she described as having a big heart and easy smile.

“We want our big day, our day in court,” Brooks told Reuters.

It took more than two months before the first charges were filed, and only after the Georgia Bureau of Investigation took the case from local police, filing charges after just 36 hours.

The former district attorney in the case, Jackie Johnson, was voted out of office and later charged with violating her oath of office and obstructing law enforcement because she told police not to file charges.

The elder McMichael had worked for her as an investigator. She has pleaded not guilty to the charges and told the media she did nothing wrong.

With lives slowed down due to the pandemic, people had time to reflect on the video of George Floyd’s killing, which may be the last straw
World
1 year ago
Next Article