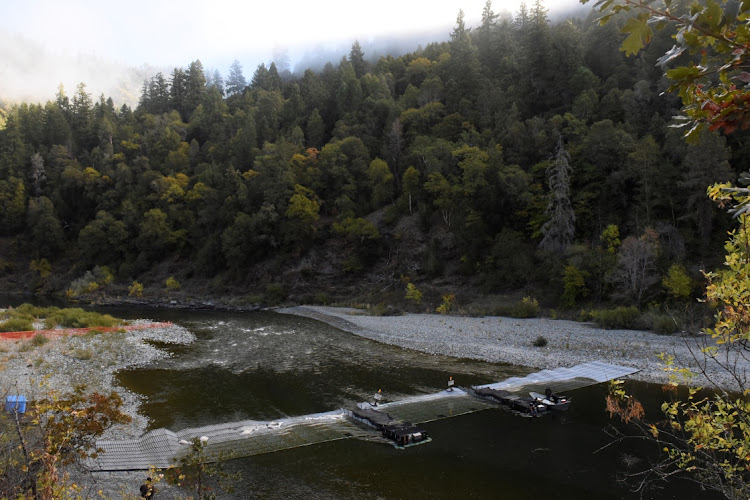 A weir, a non-lethal way to catch fish run by the Hoopa Valley tribe, stretches across the Trinity River on the Hoopa Valley Reservation in Hoopa California on October 15, 2021. Picture:REUTERS/STEPHANIE KEITH

Hoopa — California Department of Fish and Wildlife officials are completing an unprecedented effort to save more than 1-million Chinook salmon, a campaign that also may help preserve a way of life for a Native American tribe.

In June, salmon hatched at the Klamath River’s Iron Gate hatchery were temporarily trucked to a Trinity River hatchery in Northern California. The finger-length fish were held back from a scheduled release to the Pacific Ocean out of concern the river was too warm and too full of parasites for them to survive.

Over the past two weeks, they have been released as 150mm yearlings, when their natural mortality is lower and when the water is a little colder and to their liking.

It’s one step to address threats to fish populations that have declined since the Trinity and Klamath rivers were dammed in the 20th century.

Bigger measures are planned: four dams in the Klamath River are due to come down in the next three years, which officials say is the largest such undertaking in US history. Dam removal is expected to improve the health of the Klamath downstream of the Trinity, part of the route that Chinook salmon take from the ocean to their upstream spawning grounds, and where the young fish return to the sea.

The Trinity is the largest tributary into the Klamath. The two converge just outside the Hoopa Valley Reservation, home to about 3,200 people. The Hupas’ story is illustrative of how the brunt of climate change around the globe often falls on indigenous and marginalised communities.

The Trinity River has sustained the Hupa, as Native American people from the Hoopa Valley are known, for centuries. Subsistence salmon fishing endures today. Dam removal won’t restore the Trinity itself, though it will help the salmon on which the Hupa depend.

Jill Sherman-Warne, 55, says the river, or hun’ the Hupa language, is “in my heart”.

“When I want to think calming thoughts, I listen to the river and the birds and the water,” Sherman-Warne said, standing on the riverbank and wearing a traditional cap once worn by her great-grandmother.

The Hupas’ beloved hun’ is being drained. About half of the inflow into Trinity Lake, which was formed by the Trinity Dam, is diverted hundreds of kilometres to irrigate rich farmland and slake the thirst of others.

Living off the river

“The threat to our fishery with regard to any possible extinction and total destruction of our fishery is definitely real,” said Joe Davis, who chairs the Hoopa Valley Tribe Council.

To the Hupa, and much of California’s environmental lobby, the fish are a bellwether for the overall health of the environment, with benefits for humans and wildlife. Besides sustaining the Hupa and other tribes, salmon provide revenue for a $900m industry, according to state Fish and Wildlife estimates.

About 50% of the state’s water reserves are released for environmental concerns, eventually draining into the Pacific Ocean. With an epic drought under way, critics consider that a waste, saying California is forcing water scarcity on itself to save fish that are dying anyway, while denying a $50bn agricultural industry its most needed resource.

Wade Sinnen, a state Fish and Wildlife senior environmental scientist, said the competing interests remind him of the quote often attributed to Mark Twain that “whiskey is for drinking; water is for fighting over”.

“It really does come down to your value system, right?” Sinnen said.

Francine Lewis, 64, worries about the results of such a fight. “If our river dried up, we would die,” the Hupa woman said. “We would, because we live off the river.”