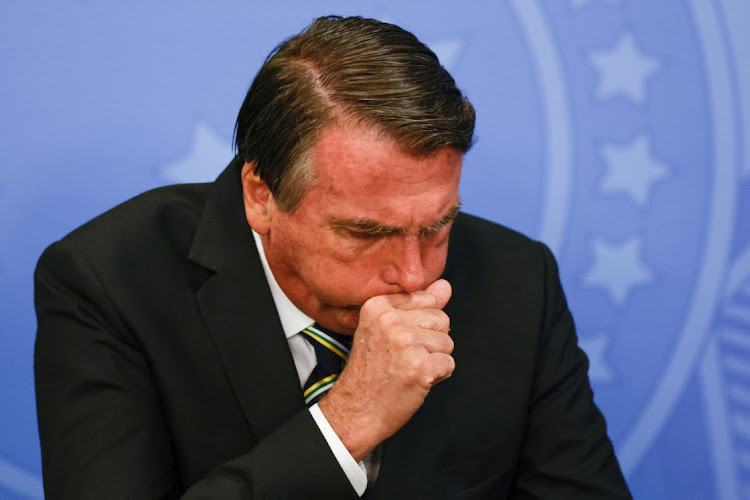 Brazil's President Jair Bolsonaro coughs during a ceremony to sanction the bill that create the Federal Regional Court, at the Planalto Palace in Brasilia, Brazil on October 20 2021. Picture"REUTERS/UESLEI MARCELINO

Brazilian senators say Jair Bolsonaro should be charged for nine crimes, including charlatanism, malfeasance and crimes against humanity, in their conclusion of a probe into the government’s handling of the Covid-19 pandemic that’s unlikely to have any short-term effect on the president’s political fate.

A senate commission presented a final report late on Wednesday after six months of heated hearings and discussions, which included testimony from the four men who served as health ministers since the start of the pandemic, Bolsonaro allies and foes, companies that pushed for unproven early treatments and Covid-19 patients.

Bolsonaro is largely blamed for Brazil’s erratic handling of the pandemic, dismissing it as just a flu, shunning face masks and vaccines and encouraging his supporters to ignore restrictions imposed by states and cities to halt the spread of the virus. The country has recorded more than 600,000 deaths from the disease, second only to the US globally, and counts more than 21-million cases.

The official report accuses the president of working against scientific evidence, acting with “obvious disregard” for people’s lives, as evidenced in the “deliberate delay” in the purchase of vaccines. It also says he worked “strongly” to disseminate fake news about the pandemic. The vice-president of the probe, opposition senator Randolfe Rodrigues, said the charges presented could carry a maximum sentence of 78 years behind bars. But it’s unlikely Bolsonaro would be jailed while serving his term.

“With this behaviour, the government, which had a legal duty to act, agreed with the death of millions of Brazilians,” said an excerpt of the document presented by senator Renan Calheiros, the probe’s rapporteur. “Bolsonaro’s administration unquestionably undermined public health.”

The probe also suggested indictments of 67 other people and companies, including current and former ministers, doctors who prescribed ineffective drugs and three of Bolsonaro’s sons — senator Flavio, legislator Eduardo and councillor Carlos — for encouraging crimes by spreading fake news.

Senators still have to vote on the report, which is expected to happen next Tuesday. The senate cannot propose formal lawsuits against Bolsonaro but rather suggest charges to the prosecutor-general, Augusto Aras. Aras, who was appointed by the president, can then decide whether to pursue or drop the charges.

An investigation of the cases could potentially lead to an impeachment request, though that’s seen as highly unlikely. Lower house speaker Arthur Lira, the sole person responsible for kicking off such procedures, is a Bolsonaro ally who has been sitting on dozens of requests for months.

“We know that we are not guilty of absolutely anything,” Bolsonaro said during a speech in Russas, a city in the northeastern state of Ceara. “This probe took time away from the health minister, entrepreneurs and public servants and did not produce anything but hate and rancour.”

The report was expected to accuse Bolsonaro of more serious offences, including murder by omission. The charges were dropped at the last minute amid an intense backlash among senators that the rapporteur had overreached.

Bolsonaro, one of the only global leaders who has refused to get vaccinated, has amped up his confrontational style during the pandemic. As deaths and cases were piling up, he frequently made headlines with comments like “everyone dies, what do you want me to do?” and “Brazilians jump and dive in open sewers and nothing happens”. He pushed unproven drugs including hydroxychloroquine and ivermectin as a solution to the outbreak, while casting doubts on vaccines and government data and bashing lockdowns.

Early in its probe, the senate homed in on the government’s delay in acquiring vaccines, which led to a slow and late start of immunisations in Latin America’s largest economy. The investigation uncovered that Bolsonaro’s administration had ignored repeated offers from Pfizer to buy shots in 2020. Accusations of alleged corruption in vaccine contracts were also part of the probe.

The immunisation efforts have since picked up. Brazil now has more than 74% of its population vaccinated with at least one dose, well above rates seen in the US and the EU. As a result, cases and deaths have plunged even as the economy reopens.

Bolsonaro, who is up for re-election in 2022, has seen his popularity slide to record lows amid the pandemic and its ensuing economic toll. Inflation that’s surged past 10% amid soaring food and fuel costs has further eroded his standing, and the leader is trailing former president Luiz Inacio Lula da Silva, his main political rival, in most voter polls so far.

In congressional probes in Brazil, “everything or nothing can happen”, said Antonio Carlos de Almeida Castro, a criminal lawyer who has worked for years for dozens of investigated politicians. In this case, he said, people will be frustrated if nothing happens, which he thinks will be the case.

“The lower house speaker doesn’t have to put an impeachment to a vote, and the prosecutor-general has no obligation to accept the charges,” he said. “The charges will be in the hands of two people with imperial powers who may simply do nothing.”